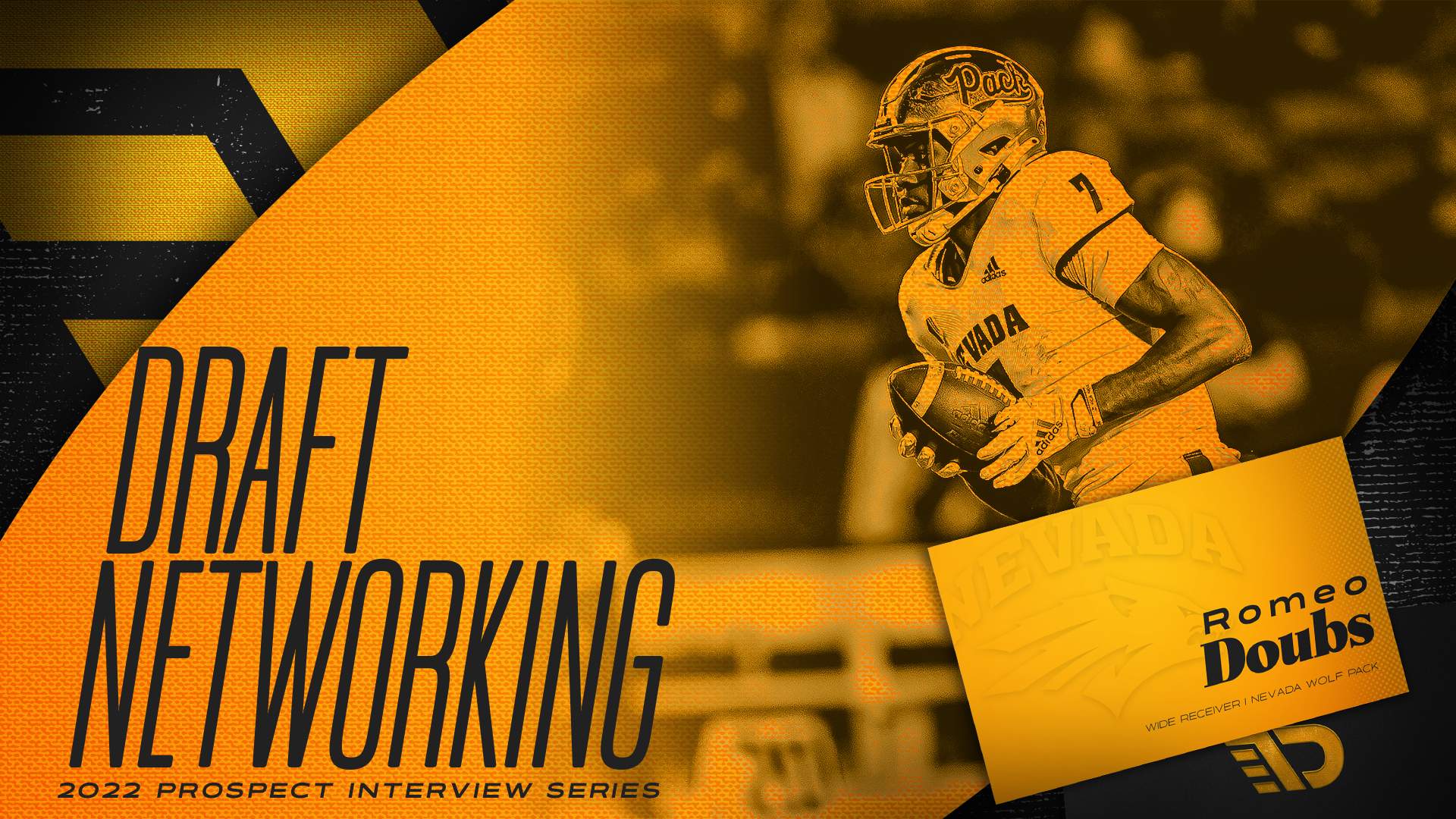 If you’re looking for a receiver prospect in the 2022 NFL Draft ​that can stretch the field vertically while also playing a critical role on special teams as a high-upside punt returner, Nevada’s Romeo Doubs could be both the beginning and end of your search. One of the most prolific receivers in school history, Doubs racked up an astounding 225 receptions for 3,322 yards and 26 touchdowns in four successful campaigns at Nevada. Doubs showcased especially impressive chemistry with quarterback Carson Strong throughout their shared tenure.

Doubs recently spoke exclusively with The Draft Network regarding his successful collegiate career, forming one of the most feared quarterback-receiver tandems in all of college football alongside Strong, his favorite routes to run, the advice he’s received throughout the process, what he loves about returning punts, and so much more.

JM: You consistently got better at Nevada. That natural progression allowed you to post career-highs in receptions (80), receiving yards (1,109), and touchdowns (11) in 2021. What led to those steps forward?

Preparation is always the biggest thing, in my opinion. I’ve always thought I did a tremendous job being prepared for what’s to come. Even before 2021, I was always taking positive steps forward at Nevada, as you said. I constantly progressed little by little. I’m appreciative of how I was able to develop at Nevada throughout the years. I’m so thankful to have had an opportunity to represent that program. Playing for that coaching staff was an honor. I’m blessed to be in the position I’m in right now.

JM: There’s no disputing that. Accounting for 20 receiving touchdowns over your final two campaigns is especially impressive. What is it about your game that allows you to find the end zone with such consistency?

RD: I’m a receiver that can take the top off a defense in the deep-ball passing game. That’s been the biggest part of my game throughout my time at Nevada and I experienced an extreme amount of success doing so. Even on shorter routes and targets, I always made sure I made something happen after the catch once I got the ball in my hands. I did great work in the red zone. We took a lot of deep shots down the field as well.

JM: You consistently got behind opposing secondaries. Talk to me about the chemistry you developed with Carson Strong. How did that come about?

RD: That started early. Carson Strong and Cole Turner were my roommates from the very first moment I stepped on campus. It’s always been about the little things for us three. We used to work together in the offseason.

We always hit the field together throughout the summer. We got to know each other better that way. We became more familiar with our tendencies. We threw the ball together, we ran routes together. That chemistry has always been there between Carson and I. I knew exactly what routes he wanted and how he wanted me to run them. Whenever I got a signal from him on-the-fly or from the sideline, we were always on the same page. We could flawlessly communicate with one another in the middle of a play. It became second nature for us. I know Carson inside-out and I know he loves to throw the ball deep.

I was talented enough to take the top off the defense. It was the off-field, offseason things. We practiced together. We watched film together. We set time aside. I always thought those things were very important. Carson and I were always together. That’s why communication and chemistry have always been there.

JM: It shines on tape as you guys formed one of the most feared and productive quarterback-receiver duos in all of college football. You talked about knowing how he wanted you to run routes. What about you? Do you have a favorite route to run?

JM: You sure did. Sometimes, the fastest way for a rookie to get on the field is by playing special teams. You have a ton of experience returning punts. You averaged a healthy 14.2 yards per punt return in 2021. What do you enjoy about returning punts, and do you hope to continue doing so at the next level?

RD: I definitely hope to continue returning punts at the next level. I know what my expectations are coming into this league. As a rookie, it’s going to be all about special teams. More snaps at receiver will occur naturally on its own in due time.

When I took my visits, I made sure I went and asked questions. I approached coaches at the combine and I asked questions. I love seeking out useful information. I’ve spoken with a few current players that have NFL experience. I love asking questions. What are my expectations coming into rookie mini-camp? How should I approach my first season as a rookie?

Every answer has essentially been the same. I keep hearing about special teams. The emphasis is always on special teams and learning the playbook. I’m making sure that I prepare myself for that. That’s the answer I keep getting from everybody I ask.

JM: That makes a lot of sense, and you’re approaching it with the right mindset. Speaking of visits, if you’re able to touch on this, which teams have you met with through Top 30 in-person visits?

RD: I had a Top 30 visit with the New England Patriots. From there, I went to Seattle for a visit with the Seahawks. From Seattle, everything happened quickly, like back-to-back. I went from Seattle to Indianapolis to Minnesota to Green Bay. Those were all private visits with the Colts, Vikings, and Packers as well.

It’s funny, I was asking them questions as well, and I kept hearing the same thing. Don’t be afraid to dive into special teams and the playbook. That’s exactly what I’m going to do. I’m making sure I go into the next level mentally prepared and ready to go. I’ve done my part by asking questions and receiving answers from some of the most knowledgeable people throughout this process.

I’ve spoken with both coaches and players. Now it’s time for me to go execute what I’ve learned. If you stay ready, you don’t have to get ready.

JM: You have the right mindset and you’re certainly approaching the next level in the correct manner. I’m very impressed. I’ve really appreciated your time today. In closing, why should a team use one of their draft picks on Romeo Doubs?

RD: I can play football at a high level at the end of the day. I feel like I’m going to grow into a professional system. My skill set can translate into any scheme. I’m going to give my coaches a reason to believe in me as much as I believe in myself and my own abilities.

I’m praying to God that I get placed in the right situation. I think that’s extremely important. I know that’s what it comes down to at the end of the day. On my end, I know I have the talent necessary to play ball in the NFL.

I’m going to continue taking good advice while working on my craft moving forward. I’m always going to do what I have to do as a player.