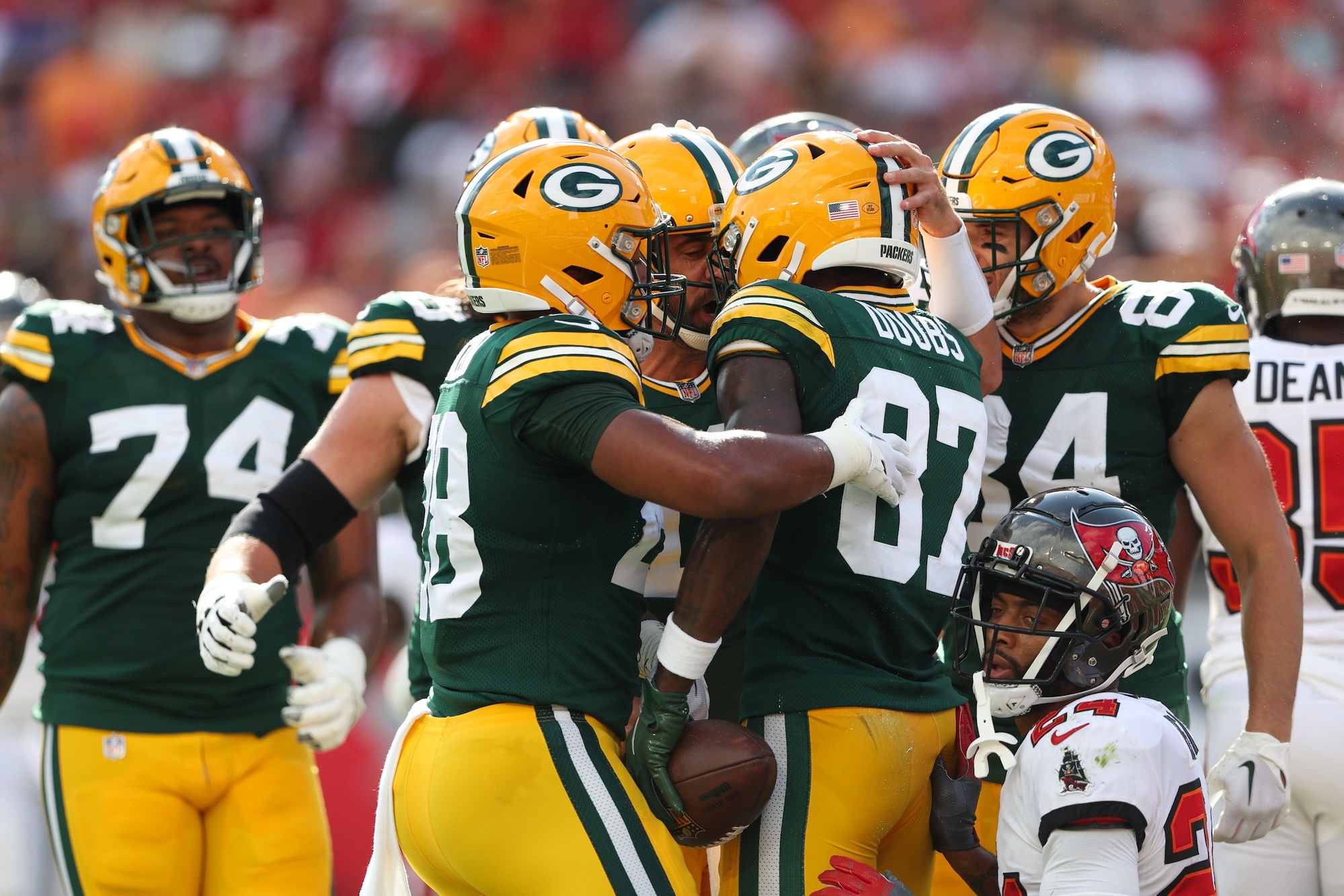 Green Bay Packers rookie wide receiver Romeo Doubs has officially taken over as the lead producer in Green Bay’s receiving room after his performance on Sunday. Can he continue to produce like this all season and take over the helm of Packers WR1?

Sunday’s matchup against the Tampa Bay Buccaneers was definitely a good start for Doubs’ run at becoming a worthy successor to Davante Adams. The Packers’ fourth-round rookie caught all eight of his targets for 73 yards and a touchdown on Sunday. That may not appear eye-popping at first glance, but let’s add some context there.

According to ESPN Stats & Info, no Green Bay receiver not named Adams had caught at least eight passes in a game since Week 1 of the 2018 season. That’s sixty-six games in a row. That really puts into perspective how much quarterback Aaron Rodgers loved to throw to Adams while not trusting his other receivers over the last few years. But it looks like Doubs is starting to gain more of Rodgers’ trust already in his rookie year.

On Sunday, Doubs also became the first rookie receiver to catch a touchdown from Rodgers since Marquez Valdes-Scantling did in Week 5 of 2018.

That’s less of an indictment on Rodgers and his lack of trust in rookies and more an indictment on the Packers’ refusal to get their quarterback more young receiving help. From 2019 to 2021, they only drafted one receiver, Amari Rodgers, and signed four undrafted free agent receivers, none of whom were on the season’s final roster.

This year, Green Bay actually drafted three receivers Christian Watson in the second round, Doubs in the fourth, and Samori Toure in the seventh. All three made the roster, but Toure hasn’t been active for a game yet this season and Watson only caught five passes for 43 yards (and dropped a sure touchdown) before injuring his hamstring.

As a result, Doubs has been the only real contributor of the trio thus far with his production against the Buccaneers being the best game of an already impressive start to his pro career. Now, Doubs leads all Packers skill players with his 14 receptions and 137 receiving yards.

The question that still remains is whether Doubs’ status as the No. 1 receiver will hold for the full season. Part of the reason he got so many looks against Tampa Bay could be that both Watson and veteran Sammy Watkins were hurt. It was Watkins who led Green Bay in receiving yards before Sunday after all, and he still remains second on the team in yards (111) despite being tied for seventh in targets (7) on the season. When both Watkins and Watson return, it’s practically guaranteed that Doubs will get fewer looks and would be less productive as a result.

Doubs is already doing things no Packers rookie receiver has done for three full seasons and that no Packers receiver that wasn’t Adams has done in nearly four. His hands, which seemed to be an issue in training camp and preseason play, have looked much better in the regular season. Through three weeks, Doubs has caught 14 of his 16 targets—an 87.5% catch rate—and just one drop. Rodgers himself praised Doubs’ hands and football IQ recently on the Pat McAfee Show, saying that the best thing about him is that he catches with his hands and not his body.

Having the chance to build extra chemistry with his quarterback has clearly already started to pay off for Doubs. Earning Rodgers’ trust with a big game while a couple of other top receivers were out also hasn’t hurt Doubs’ case to be Green Bay’s No. 1 receiver.

Watkins is on injured reserve now and will be out until at least Week 7, but Watson seems to be in line to return to action as soon as this week. Seeing how much Rodgers and the Packers look to Doubs against the Patriots on Sunday with more pass-catchers available will be very telling as to where Doubs stands relative to the other receivers. Given how good he’s looked in the regular season so far though, he’ll probably stay up among Green Bay’s top receivers all season.