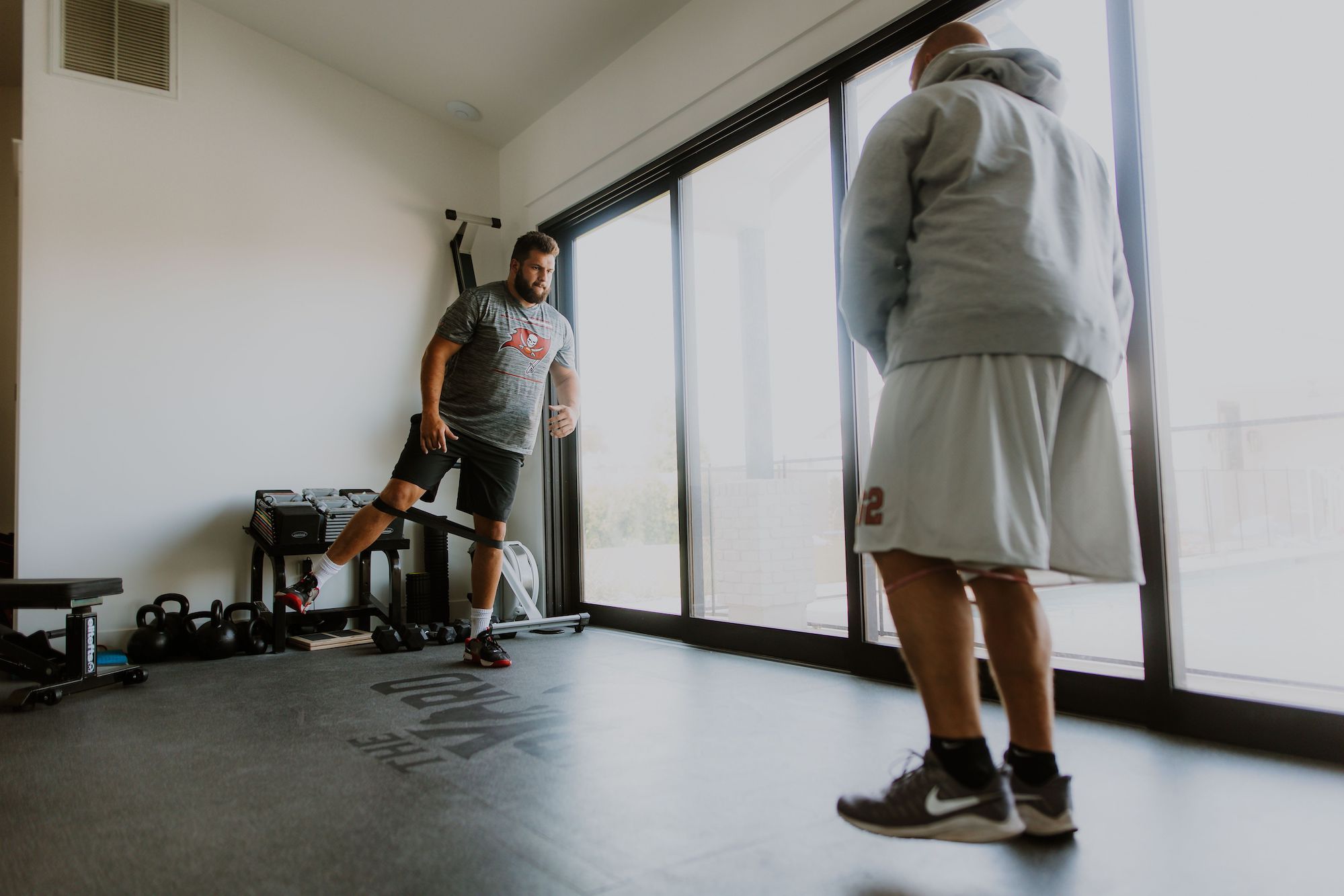 Robert Hainsey Putting In The Work Before Living The Dream

Robert Hainsey lifts the bottom of his now-two-toned gray t-shirt to his face, wiping the collection of sweat that’s accumulated on his forehead.

Hainsey, entering his second season as an offensive lineman for the Tampa Bay Buccaneers, and the rest of the NFL world are technically on break. But when you’re vying for a starting spot with a minefield of competition in the way – vacation is a luxury that even an NFL player can’t afford.

“Another inch!” barks A.Q. Shipley, as he makes sure Hainsey’s pad level gets even lower.

Low man wins, after all.

Shipley played 12 years in the NFL as a center. His playing career came to a close as a member of the 2020 Buccaneers team that hoisted the Lombardi Trophy within the first year of quarterback Tom Brady’s arrival. Shipley was the backup to center Ryan Jensen. A neck injury suffered amid some injury-related line shuffling late in the season made his retirement decision for him. Not before he got a ring, of course.

Shipley then spent all of 2021 as an offensive assistant under Head Coach Bruce Arians, with Arians insisting he become a coach after his playing career was over. The coach likes him – loves him, even. Arians took Shipley (the player) with him wherever he went, making stops in Pittsburgh, Indianapolis, Arizona and finally Tampa together. Shipley has snapped to some of the league’s best quarterbacks as a result – including the aforementioned GOAT himself.

And yet with all the knowledge Shipley accumulated – and as natural of a coach as he was – he decided the lifestyle wasn’t for him. With three children under the age of four and a body that still needs healing, he is living his best retired life redoing the backyard of his forever home in Arcadia, Ariz.

But there’s still a football itch to be scratched. And that’s why Hainsey is here.

The pair got to know one another last year during Hainsey’s rookie season. A right tackle during his career at Notre Dame, Hainsey was told to train at center initially. Shipley practically became his personal coach from training camp onward.

Now, with Jensen re-upping for three more years at center and the departure of not one but both starting guards off the Buccaneers’ roster, there is an opening. A gap, if you will.

And Hainsey plans to fill it.

Tampa Bay traded for veteran Shaq Mason this past offseason and drafted Central Michigan guard Luke Goedeke as a way to help compensate for those departures. Mason was let go by New England for pennies after a career year. Goedeke is thought to be a starting-caliber player right out of the gate by many in the front office. Then there’s Aaron Stinnie, a player that has been with Tampa Bay going on four seasons and has filled in admirably during crucial periods – namely, the playoffs – and there’s something to be said for that.

It’s a game of musical chairs between four men for two spots now. So, Hainsey is working on his speed – among other things.

Prior to OTAs, Hainsey spent a month with Shipley in Arizona. He rented a house not too far from Shipley’s and the pair trained day in and day out together until Hainsey went back to Tampa to work with the team. Almost immediately following the team’s mandatory minicamp, Hainsey was on a flight back to Phoenix. And this time, he rented the house across the street from Shipley for the month so they could ride together to their on-field workouts.

That’s where we find him now. Panting with his white, navy and gold college cleats clattering on the pavement as he makes his way to a shaded area of the bleachers at Arcadia High School.

He collapses on the ground and drinks greedily from his Gatorade-branded water bottle. Next to him, Shipley does the same. Except his is a gallon-sized Yeti with a different GOAT on it: the Jordan logo.

At one point, Hainsey is out of water and Shipley gives him some out of his jug. He’s more prepared for the Arizona heat.

“That’s what experience gets you,” he tells me with a wink.

Shipley has also already sweat through his light gray sweatshirt – which he mumbles a justification for in the 107-degree heat. Something about wicking the sweat off his skin in the dry, arid climate.

It’s hotter on the turf itself with the sun beating down in a nearly cloudless desert sky. Hainsey has been working for hours already. The pair train four days out of the week, including lifting sessions in Shipley’s personal gym before they do on-field work.

Those sessions in and of themselves would exhaust any normal person, speaking from experience. But the on-field work stresses fundamentals along with situational preparation.

Shipley comes at Hainsey from different angles, sometimes with a padding buffer, sometimes just as if he’s a defender trying to get to the imaginary quarterback sitting behind him. Defensive linemen are taught to hit offensive linemen’s hands as a way to throw them off. But there are counter moves an offensive lineman can react with, moves that can save his leverage and therefore, his quarterback.

“It’s about how to react when the inevitable happens,” Hainsey says.

Shipley says a lot of these sessions are about situational work, as he teaches Hainsey tricks of the trade that served him well for his decade-plus career. It’s something that you pull out of your arsenal maybe twice a game (among an average of 65 plays).

“This isn’t your fastball,” Shipley says, pulling from another sport to illustrate his point. “This is your changeup.”

They combine technique with even more conditioning, ensuring Hainsey will hold up once camp begins in the humid Florida heat on Tuesday. It’s also ensuring Hainsey won’t have to think to deploy the lessons learned in Arizona. Rep after rep creates a muscle memory that is crucial to elite offensive line play.

It’s an interesting juxtaposition. While linemen may have to be some of the most cerebral players on the field, they must have a sort of autopilot of fundamentals they rely on without thinking. That’s also what Hainsey wants to have as he enters his second season.

It hasn’t come easy given Hainsey’s tackle experience at Notre Dame. The nuances and particulars of each position on the line are more pronounced than you may think. Playing on the interior isn’t natural for Hainsey – but he’s aiming to change that by putting in all of this voluntary offseason work. He’s not even taking a vacation.

“The biggest difference for me now is like, kind of loosening up, becoming more of my own player,” he says.

The two play off each other well. If something isn’t up to standard, Shipley has no problem telling Hainsey to re-do a rep. But then the big man softens, asking Hainsey why he’s having him do it again. It helps Hainsey internalize and apply the technique being taught and Shipley tells me he rarely has to correct something twice.

“The kid’s gonna be good,” he says to me quietly with Hainsey walking a few yards in front of us as we all go take a water break in the shade.

After a few minutes, we head back out to the oven-like turf for something the two call a ‘Friday Finisher’. Hainsey goes from one 20-yard line to the other, stopping every 10 yards to set himself as Shipley calls out a certain protection. Hainsey then mimics (at full speed) what he would do within that call and then sprints the remaining yards until the next marker.

By the end, he’s gassed. Shipley is gassed. Heck, I’m gassed. But it’s just one day of many in the offseason of an NFL offensive lineman.

The next day is the same, as Hainsey walks into Shipley’s poolside gym to a sound system blaring Five Finger Death Punch.

“Before living the dream, you need to put in the work,” the lead singer bellows, drowning out the grunts and groans of the men listening to the words.