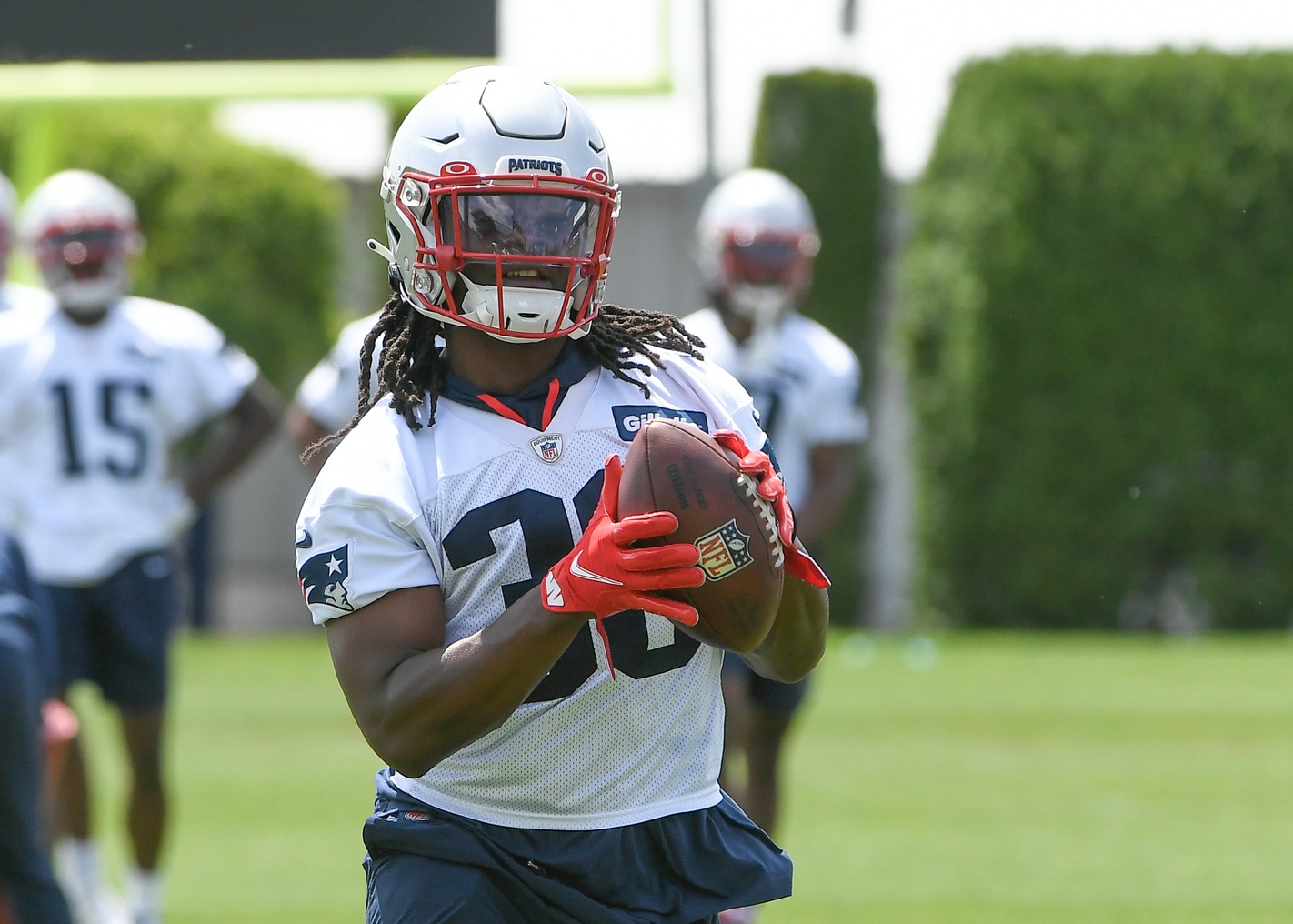 Should Rhamondre Stevenson Have Bigger Role This Season?

By all accounts and purposes, New England Patriots sophomore running back Rhamondre Stevenson is off to an impressive start at training camp. Initial reports indicated Stevenson reported at a “leaner” 225 pounds, which is approximately seven pounds lighter than his alleged rookie weight. It could lead to a speedier, more dynamic version of Stevenson in year two.

NBC’s Peter King was later floored by the first-hand impression Stevenson is leaving at camp. King went on to proclaim that Stevenson could get the “bulk of the carries” for the Patriots this season. A timeshare with Damien Harris remains the likelier outcome, but the Patriots would be wise to get Stevenson more involved this season nonetheless.

The No. 120 overall selection in the fourth round of the 2021 NFL Draft, Stevenson received a heavier workload as a rookie ball-carrier than initially expected. Stevenson appeared in 12 regular-season contests for the Patriots, starting two. He handled 133 carries for 606 yards and five touchdowns, equaling a solid 4.6 yards per carry. Stevenson added an additional 14 receptions for 123 receiving yards via the passing game.

It’s through the passing game that Stevenson contains some untapped potential. Stevenson has been making waves with his crisp rout- running and pass-catching, drawing consistent targets from sophomore quarterback Mac Jones throughout recent practices. The Patriots are aiming to craft a simpler offense under the guidance of play-caller Matt Patricia that places emphasis on timing and efficiency. Bill Belichick wants his players to play fast. A running back that can get open out of the backfield like Stevenson can adds value.

New England’s offense has always reserved room for a pass-catching back. James White became a Boston-based legend for his efforts in this area. The aging White remains on the Physically Unable to Perform (PUP) List with a concerning hip injury that’s thus far prevented him from being cleared for physical contact. White’s future in New England hangs in the balance as a result. Last season’s lead pass-catcher was Brandon Bolden, who followed Josh McDaniels to Las Vegas in free agency. The path for Stevenson has never been clearer.

Harris was New England’s starting running back last season, leading the team in all key statistical rushing categories, including an astounding 15 touchdowns via the ground. Harris’ role as the team’s traditional lead back feels secure, but he lacks the versatility necessary to be a three-down bellcow.

Harris recorded a mere 18 receptions last season, bringing his career total to 23. Haris wasn’t much of a pass catcher at Alabama either, recording just 52 receptions in four seasons with the Crimson Tide (13 catches per campaign). That’s where Stevenson comes into play. There’s room for both Harris and Stevenson to co-exist.

It’s also worth acknowledging Harris is entering the fourth and final year of his rookie contract. The Patriots running back room is already loaded with replacements. Should the Patriots decide to prepare for life after Harris in-season, Stevenson would be the biggest benefactor.

Speaking of the running back room, it’s crowded. Third-year undrafted running back J.J. Taylor remains in the mix. The Patriots also surprisingly drafted two running backs this year. Pierre Strong Jr. joined via a fourth-round selection, and South Carolina’s Kevin Harris was later drafted in the sixth round. The undersized, speedy Strong is of particular interest. Strong recorded 42 receptions at South Dakota State. Strong has been limited by an undisclosed injury in training camp. It would be a surprise if he managed to cut into Stevenson’s workload.

Stevenson could experience a breakout campaign. It’s early, but Stevenson has swiftly turned heads throughout the first few training camp practices. The Patriots’ offense would be wise to get Stevenson plenty involved moving forward.