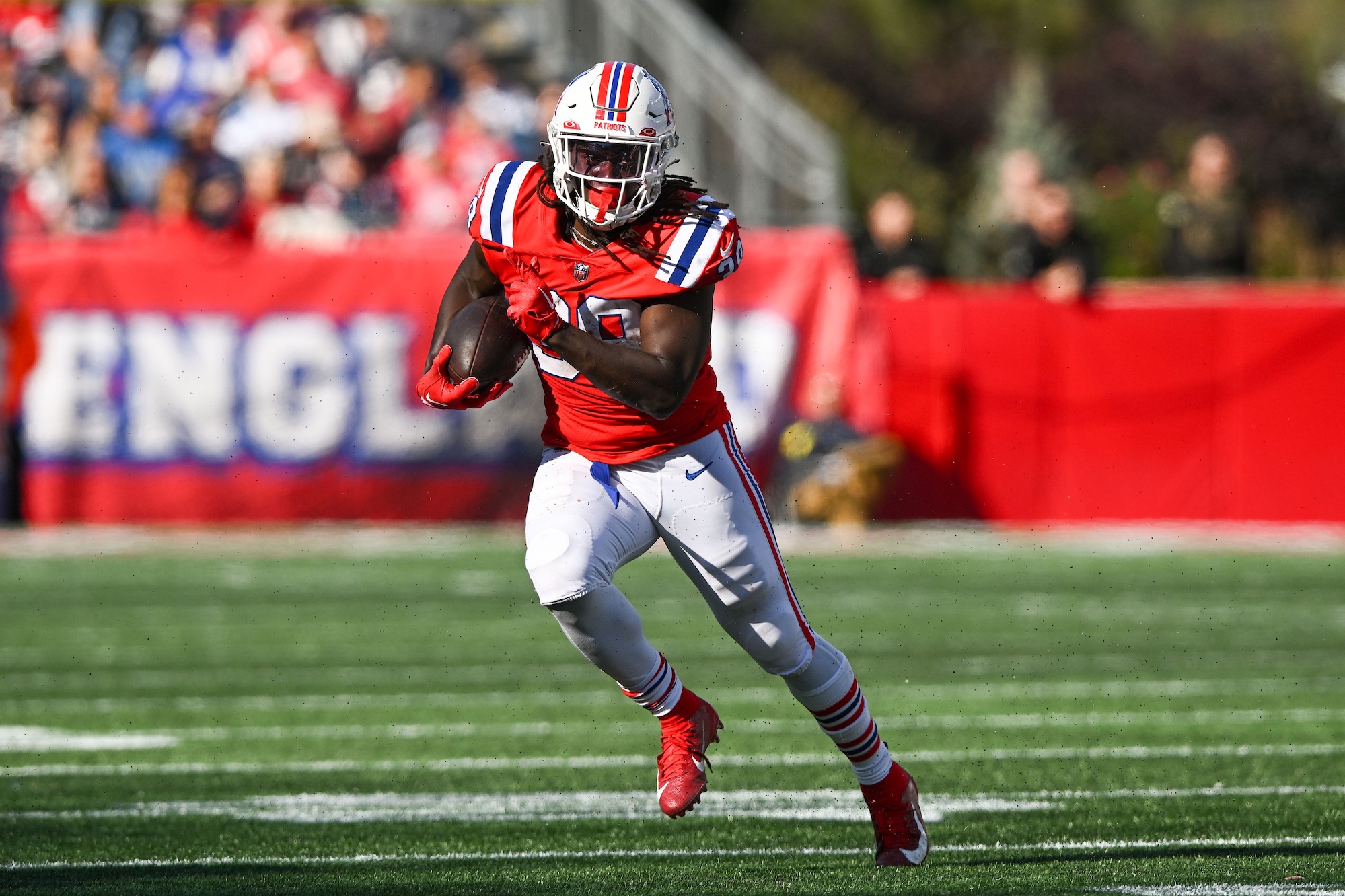 Rhamondre Stevenson May Never Give Patriots’ Starting RB Job Back

Since his return to the media, Michael Lombardi has shared wisdom passed down to him from the likes of Al Davis, Bill Parcells, and Bill Belichick. Among the Parcellsisms he has shared with his readers: “sometimes you’re an injury away from becoming a good team.” The New England Patriots may have had a version of that injury with Damien Harris’ hamstring strain in their victory against the Detroit Lions. If Harris’ hamstring opens the door for second-year running back Rhamondre Stevenson to seize the lead back role in New England for good, the Patriots may just be better off for it.

Harris’ injury allowed Stevenson to carry a full workload for the first time in his career on Sunday. He thrived. Stevenson carried the ball 25 times for 161 yards, with 111 (69%) of those coming after contact.

While Stevenson’s rushing output impressed, it shouldn’t have surprised. It merely continued a season-long trend for Stevenson. He has averaged 4.24 yards after contact per attempt this season, third most in the league among qualifying running backs (PFF).

Most noteworthy for his viability as a potential three-down player was his work as a pass protector on two critical third downs, as pointed out by Mike Reiss on Twitter.

These plays by Stevenson epitomize the growth in his game—yes, being able to create yards when they are not there is critical for any running back. This ability was never in question with him. However, the ability to make the quarterback feel safe in passing situations will determine Stevenson’s viability on passing downs.

In Ty Montgomery’s absence, the Patriots have shown trust in Stevenson in obvious passing situations. He has mainly played ahead of Harris in two-minute drills and third and longs.

Stevenson’s presence on the field as New England’s sub back, and even as their early-down runner, gives the team something at the position they’ve lacked since Dion Lewis and Rex Burkhead shared the backfield in 2017: true multidimensionality at the position.

The Patriots have typically relied on a sturdy running threat on early downs who brings little-to-no value in the receiving game since the 2010s. Think BenJarvus Green-Ellis, Stevan Ridley, LeGarrette Blount, Sony Michel, and now Harris. Lewis, circa 2015 and 2017, was the exception: a weapon in the run and pass game.

On the whole, their approach at the position has been a success—Patriots offenses were excellent in the 2010s (thanks, Tom), Faulk is a Patriots Hall of Famer, and White will likely make the Patriots Hall of Fame for his work as the team’s sub back from 2016-2021. However, in recent years the team’s pass rate with White on the field has hovered around 75% with their run rate hovering around 75% with their early-down options on the field. In other words, their backs have been a run/pass tell; they have lacked multidimensionality out of the backfield.

Stevenson has developed into a more polished blocker, route-runner, and receiver in his second season. He came into training camp improved in the receiving game and is on pace to catch 44 passes this season. His role on third downs has been secure since Montgomery’s injury in Week 1. Eating into Harris’ early-down role would add multidimensionality and versatility to New England’s backfield, making the Patriots a less predictable team on a down-to-down basis.

While Stevenson may well take this opportunity and seize control of the backfield, Harris will not and should not go away. He remains a useful and dynamic runner in his own right. However, given Stevenson’s status as a versatile threat out of the backfield and his dynamism as a ball carrier, it makes sense for him to get the lion’s share of the work in this backfield.

Regardless of what Stevenson’s role winds up being by the end of this season, he appears to have gained the respect and admiration of the most important man in Foxboro: head coach Bill Belichick.

“He is a good all-around back,” Belichick said after Stevenson’s game against the Lions. “Love him. Love him.”

Harris is playing on an expiring contract. Most people assume, due to the presence of Stevenson and the players New England drafted a few months ago, he is not long for Foxboro. The Patriots have no running backs under contract past this season besides Stevenson and those 2022 fourth and sixth-round picks, Pierre Strong and Kevin Harris. They have yet to record a carry this season.

In other words, Belichick’s seal of approval should carry long-term weight for Stevenson. His time as the lead back in this backfield is coming sooner or later. It should be sooner. If not, it will be later.