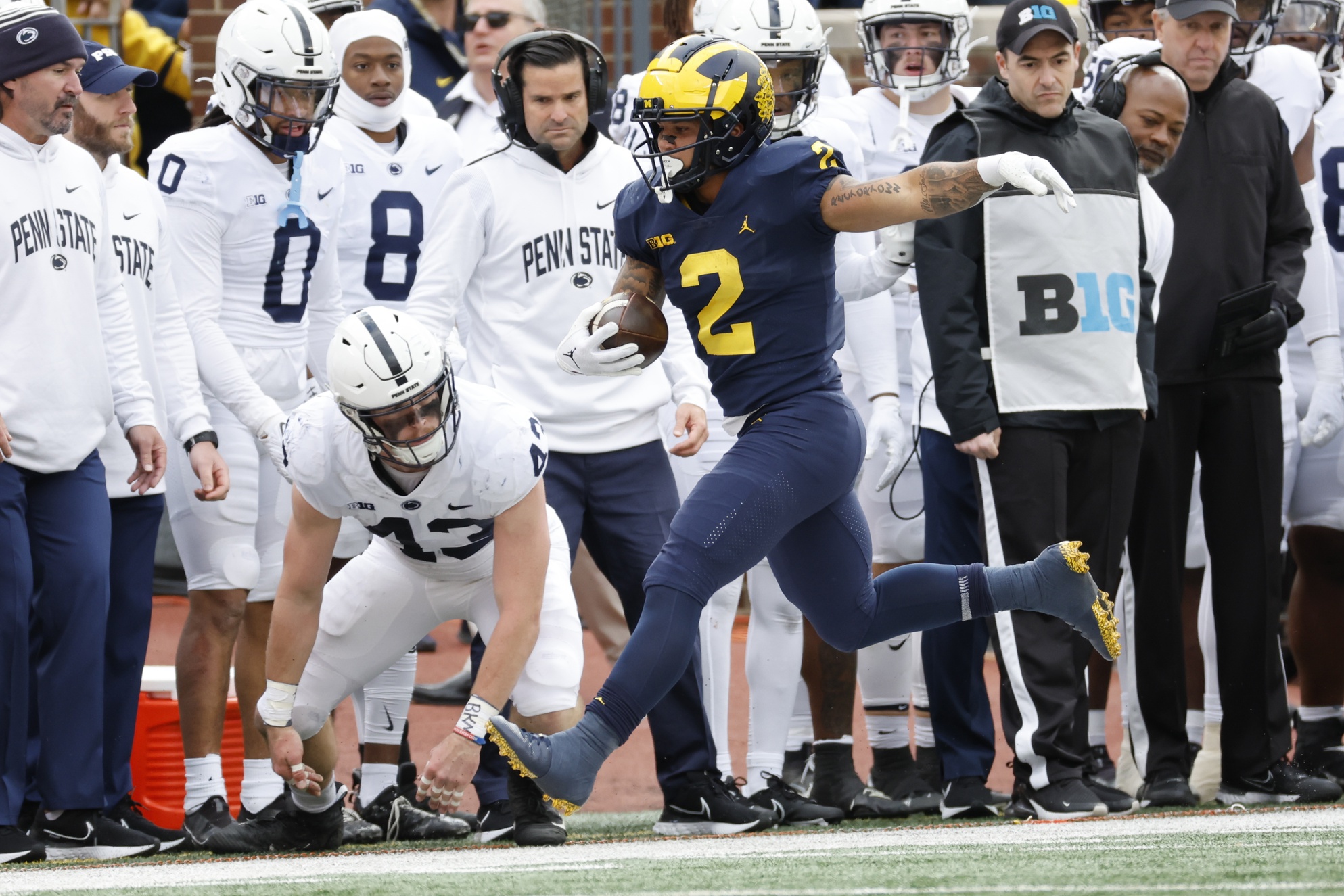 A positional group as impressive as any in the upcoming 2023 NFL Draft, a slew of running back talents have begun to jostle for draft position as we approach Week 8 of the college football season.

While the narrative surrounding ball carriers has changed over the last few years in regard to just how much draft capital teams should use on a bellcow talent, the deep talent pool set to arrive next spring has presented an internal battle teams will have to conquer if they desire one of the running backs we’ll get into here shortly.

While Texas’ Bijan Robinson and Alabama’s Jahmyr Gibbs have all but heard their names called as the first RBs expected to come off the board come April, who is RB3? Let’s dive in.

A former two-year member of the Michigan Wolverines, the UCLA bellcow in Zach Charbonnet deserves every bit of your attention. A blend of power and speed whose success has raised the Bruins’ ceiling this fall, Charbonnet’s near 200-yard performance the last time we saw the Bruins in action showcased a flat-out DUDE in the backfield.

Behind one of the country’s top offensive lines, Charbonnet ran roughshod over the now No. 15-ranked Utes to the tune of 22 carries for 198 yards and a touchdown. What impressed the most was his yards per carry, as the big 6-foot-1, 220-pound talent averaged nearly 10 yards a pop every time he had the ball in his hands. While that’s a credit to a front five that has become one of the most overpowering run-blocking units in the nation, Charbonnet’s ability to find creases, accelerate both to and through contact, and possess the extra gear to scoot past the third level has seen his 2023 NFL Draft stock rise as a fourth-year senior.

Following the start of his college tenure that saw him rush for 726 yards at Michigan in 2019, Charbonnet’s workload the following season quickly diminished in a loaded backfield headlined by Blake Corum and Hassan Haskins. He promptly transferred to UCLA where a path to heavy snaps has seen him blossom. On an offense littered with talent in dual-threat quarterback Dorian Thompson-Robinson and flex weapon Jake Bobo, Charbonnet has become the straw that stirs the drink for a group on the verge of the AP Top 10. Big, fast, strong, productive, the boxes are all checked.

While there won’t be any comparisons made to the Orange’s prestigious list of alums in Jim Brown, Floyd Little, or Larry Csonka just yet, with 1,496 yards on the ground last fall and 644 thus far in 2022, Sean Tucker checks a ton of boxes as a future NFL impact starter. A stoutly-built prospect that stands no more than 5-foot-10, if it were a t-shirt and shorts contest, Tucker would finish near the tail end of the selection process for many. As we know, however, the game of football isn’t a beauty contest—it’s violent, and Tucker has become one of the most overpowering talents the nation has to offer. While the names previously mentioned have garnered headlines throughout the spring, due to Syracuse’s lack of program prestige within a weak ACC, Tucker’s game has flown under the radar in comparison to some of the country’s most dynamic backs.

After totaling 626 yards in his first year on campus, Tucker—a redshirt sophomore—shattered the Syracuse single-season rushing record in 2021 and entered the season with Heisman aspirations as the Orange’s premier offensive weapon. Despite the Orange finishing under .500 in seven of the last eight seasons, Tucker’s progression into one of the best running backs in football has blossomed the now No. 14-ranked and undefeated Orange’s offensive attack.

A talent who reminds me a ton of Pierre Strong Jr.—a running back out of South Dakota State that the New England Patriots used an early day-three selection on back in April—Tucker’s deceptive quickness and lightning-quick footwork within a phone booth is extremely intriguing. A hard-nosed ball carrier who can run both through and around defenders, it doesn’t take a massive crease or an army of bodies for him to see open turf—he manufactures space by using his eyes, hips, and feet to explode through the smallest of holes into vacant grass, and usually, the end zone.

While it’s only mid-October and the 2023 NFL Draft evaluation of Tucker that we are discussing now will alter in the coming months, I’m interested to see his growth as a pass-catcher as we move into the meat of the season and during the pre-draft process. Gone are the days of static early-down backs without pop in the passing game. By diversifying that side of his deep bag of likable traits, there isn’t a ceiling on how much he could improve his 2023 NFL Draft stock throughout the campaign.

One of the most impactful running backs Syracuse has had in its program’s 120-plus year history, Tucker’s expectations remain sky-high for the 2021 first-team All-American. While the Orange as a whole have had little to hurrah about over the years, take time to watch No. 34 embarrass your favorite defense.

I promise this video isn’t sped up. Sean Tucker can FLY

Arguably the most impressive back in college football this year, Blake Corum—one of the favorites for the Heisman—has been everything and much, much more for the Wolverines’ offense since his arrival in 2020. A talent that has shared the backfield with the likes of Charbonnet and Haskins over the last two seasons, 2022 has seen him blossom into one of the most enjoyable ball carriers in the country.

He won’t blow you away with size, power, or speed, but at times he’s single-handedly shouldered the Wolverines’ offense this fall—give credit when credit is due. The poster child of college football’s ninth-best run game when it comes to yards per outing (241.7), his 901 accumulated total ranks second only to Illinois’ Chase Brown in the country, and his 13 trips to paydirt lead the nation through seven games.

Everything for the Maize and Blue starts with Corum, and if they eye a trip back to the CFP this winter, it’ll be on the shoulders of the former four-star prep talent. Don’t let his lack of vertical prowess (5-foot-8) sway you from his overall impact, as his shiftiness and electric open-field ability are an impossible task to wrangle down for a full 60 minutes. A north-south runner with an excellent first step, adding an increased role in the passing game will continue to raise his 2023 NFL Draft stock.