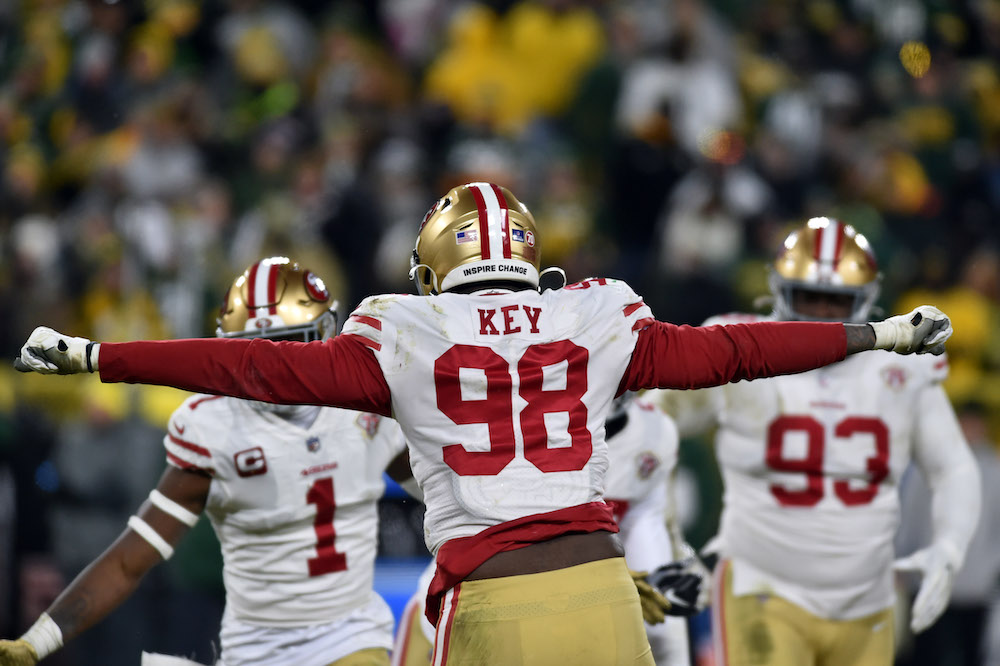 Could Key, Green Be Answer to Ravens’ Pass Rush

Baltimore Ravens General Manager Eric DeCosta is on a merciless hunt to find his team some pass-rushing help. DeCosta previously reached a verbal agreement on a four-year, $35 million contract with Za’Darius Smith before the former Raven decided to back out of the deal and sign a more lucrative contract with the Minnesota Vikings. It represented a significant blow for DeCosta and the Ravens, who must now pivot and find help elsewhere. DeCosta isn’t wasting any time. According to a report, rotational pass rusher Arden Key is in town for a free-agent visit with the Ravens after previously meeting with the Jacksonville Jaguars and Detroit Lions. Key isn’t the only front-seven defender the Ravens are considering signing. Seattle Seahawks defensive end Rasheem Green is also said to be visiting the Ravens.

Both Key and Green are capable of providing the Ravens with the boost of pass-rushing talent they are so clearly searching for. Key is a similar player to Baltimore’s original target in Smith in the sense he would provide the Ravens with the inside-outside versatility DeCosta prefers. New Defensive Coordinator Mike Macdonald possesses a brilliant defensive mind that prefers to run front multiplicity. Key, who recorded a career-high 8.0 sacks as a member of the San Francisco 49ers in 2021, impacted opposing pockets from a variety of alignments. San Francisco lined Key up all over their front seven, including snaps from the six-technique, three-technique and wide nine alignment, among others. A former four-star recruit at LSU, Key’s professional career began in less-than-ideal fashion after off-field concerns plummeted his stock in a draft-weekend fall from grace that resulted in him being the 87th overall selection in the 2018 NFL Draft. Key’s career with the Raiders failed to launch and he was released after totaling just 3.0 sacks in as many seasons. Key finally reached his potential by exploding in 2021 with the 49ers and is now looking to cash in on a long-term contract elsewhere.

A former third-round selection that has spent his entire four-year career with the Seahawks, Green is another defensive end that is looking to capitalize on his career-best season in 2021. Green finished second for the team lead in sacks with a healthy 6.5 quarterback takedowns. The former USC standout is a tough, hard-nosed defender that would immediately fit into Baltimore’s culture and rich history of defensive stonewalls.

It’s easy to understand why the Ravens are aggressively attempting to upgrade their pass rushing unit. Baltimore recorded a pathetic 34.0 sacks in 2021, which accounts for just 2.0 quarterback takedowns per game in 17 regular-season contests. That placed Baltimore in similar territory from a pass rushing perspective alongside the likes of the Jacksonville Jaguars (32.0 sacks), New York Jets (33.0 sacks) and Detroit Lions (30.0 sacks). Not exactly the company one wants to keep. Linebacker Tyus Bowser led the Ravens in sacks with 7.0 and greater efficiency is clearly required. Rookie Odafe Oweh flashed promise with 5.0 sacks in his debutant campaign and the Ravens must continue investing in the talent around him. Playing in the AFC North division alongside Joe Burrow and the ever-elusive Lamar Jackson means the Ravens must have more defensive success going forward. It’s worth mentioning the athletic Mitchell Trubisky has seemingly taken over for the retired Ben Roethlisberger in Pittsburgh, making the quarterbacks in the division even more athletic and difficult to sack.

Change is undeniably on the horizon. Veteran outside linebacker Justin Houston, who accumulated 4.5 sacks for Baltimore last season, is an unrestricted free agent and his future hangs in the balance. Veteran defensive tackle Calais Campbell is also a free agent and is expected to play elsewhere next season. Baltimore’s front seven will look considerably different in 2022 and that could be a good sign for a team that failed to consistently apply pressure on opposing quarterbacks a year ago.