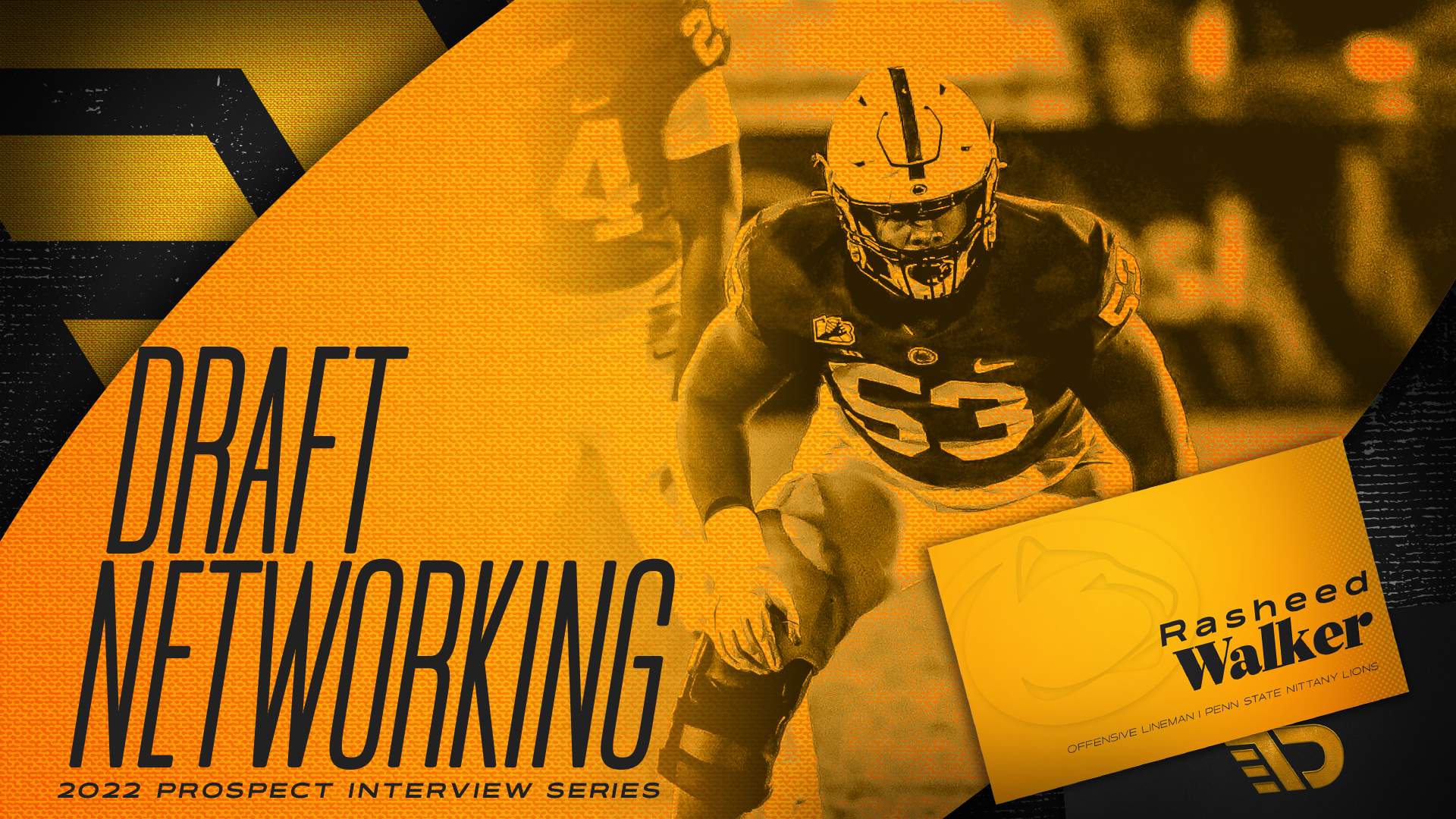 Walker recently spoke exclusively with The Draft Network regarding his impressive career at Penn State, which teams have shown interest in him throughout the pre-draft process, why he feels his game is perfectly balanced, his advanced mindset in pass protection, what kind of impact he plans to make at the next level, and so much more.

JM: What an impressive career you had at Penn State as a three-year starter at the blindside position. How do you reflect on your career as a Nittany Lion?

RW: For one, everything just kinda went by so fast. Time really does fly when you’re having fun. When you’re playing football, you’re always so focused on the task at hand. You don’t even realize that time is going by. You’re taking everything week-by-week. You’re focused on trying to go 1-0 every single day.

When you look back at it, it’s really crazy for me to say that I’ve experienced it and done it. At the end of the day, I had so much fun alongside my brothers. It feels like I blinked and it was all over. I’m definitely going to miss playing with my boys.

JM: Time flies when you’re having fun. I’m excited by what I see from you on tape so I’m going to dive right into your identity as a player. Do you feel like you’re more advanced in pass protection, or as a run blocker at this point in time?

JM: In pass pro specifically, how do you handle speed differently from power?

RW: That’s a tough question because I can answer it a few different ways. The first thing I do is turn on the film. One of the first things I look for in a defensive end or a defensive player is their stance. Their stance will tell you a lot about what kind of player and rusher they are. If I’m going up against a guy with speed, I know I want to get off the ball first. That’s going to help me create the separation I need and the time to react to get my hands on target and on point. I’m getting off the ball quickly against a guy with speed and I’m standing inside-out.

At the end of the day, I know the defensive end has to come to me no matter what. I’m not gonna chase him. Once they get past that point, it’s all about a point. If I throw off that point, they might try to bull-rush through me or go back inside, and I’m definitely not about to let that happen.

By the time I line up in my stance for the first time, I’m already extremely familiar with the player lined up across from me. It’s all about angles at the end of the day.

JM: You obviously have a great understanding of the different ways pass rushers line up and how they try to win against you. I’m curious if any teams have discussed the possibility of you playing guard at the next level?

RW: Certain coaches have asked me how I feel about playing different positions throughout the process. They specifically wanted to discuss positions I haven’t really played previously, such as guard. I pretty much just told them I’m open to playing anything. I just wanna be on the field and help the team at the end of the day. I wanna contribute and win games by any means necessary. That’s how I handled that. I don’t have a problem with playing a different position.

JM: That makes sense. What would you say is your favorite way to demoralize your opponent?

RW: My favorite way to demoralize my opponent is to stay on him the whole time throughout the course of a game, especially when I’m down blocking. I try to really finish him and play through the whistle. I love giving them that extra little pull and tug to let them I’ll be there all day long (laughs). I’ll push you at the end of the play just to let you know I’m there.

I take a lot of pride in my abilities in pass protection, my ability to protect my quarterback. A lot of times, I’ll let my feet take control of the action. A lot of times, defensive linemen will get frustrated because they can’t get by me. There are a lot of aspects of my game that I feel like naturally demoralize my opponents.

JM: You’re a pleasure to watch on film. Which teams have you met with throughout this process, both virtually, and through Top 30 in-person visits?

RW: I’ve met with pretty much every team in the league if we’re talking both virtuals and in-person visits. I’ve had a very busy travel schedule throughout the month of April. I’d say I’ve met with every single team one way or another. In-person wise, I met with the Washington Commanders, Las Vegas Raiders, Jacksonville Jaguars, Minnesota Vikings, and Green Bay Packers, to name a few. It’s such a blur. I know I visited with a few more teams in person.

JM: There’s a ton of interest in you, and it’s easy to see why. If you could sit down and pick the brain of any offensive tackle in the NFL, who would you choose and why?

What Williams does on the field is unbelievable. I want to talk to him and ask him how he prepares, and how he gets himself in that mode to perform with such consistency. With Whitworth, I wanna ask him how he was able to keep his body in shape to play in the league for that long. It’s such a physical position. He has a lot to teach from a methods perspective I’m sure. I’m sure he formed such terrific habits in order to put himself in that position.

JM: Those are two terrific choices. I’ve really appreciated your time today. What kind of impact is Rasheed Walker going to make at the next level?