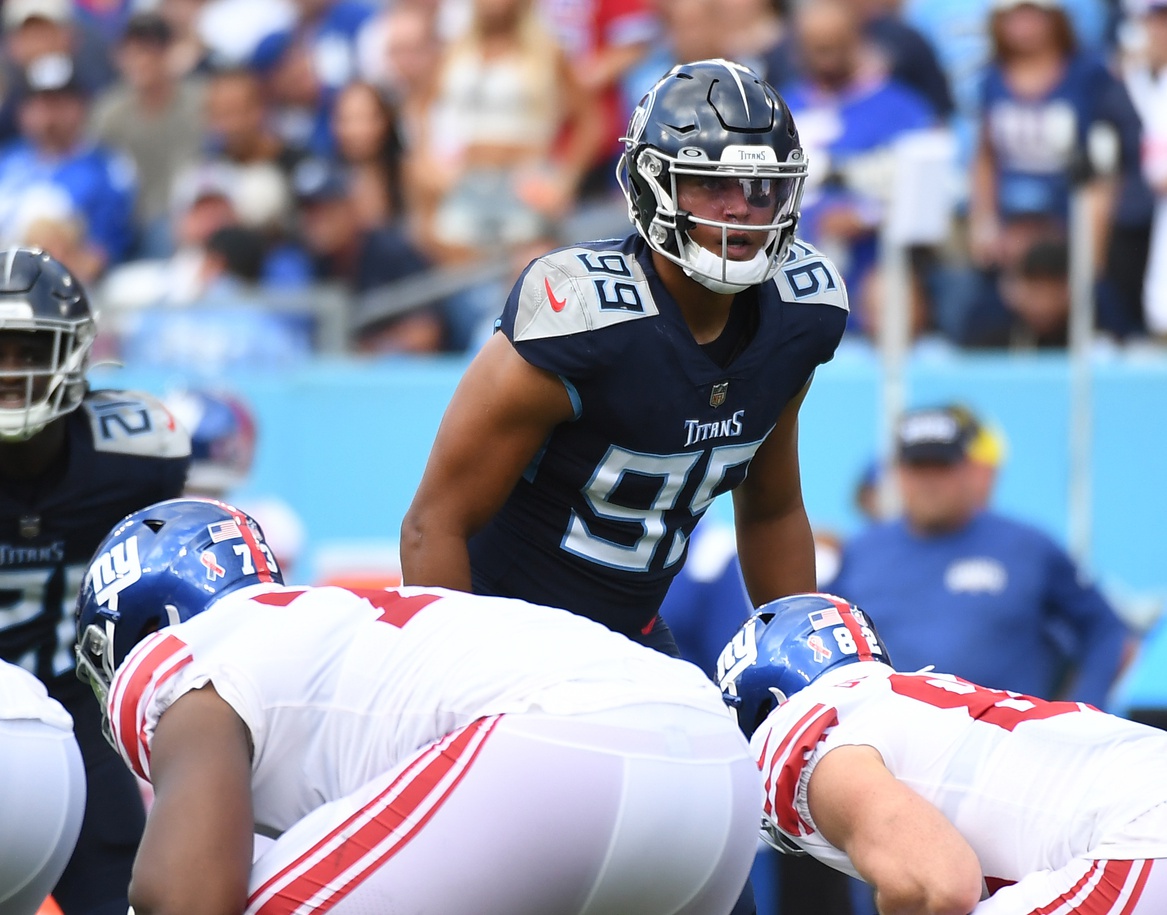 One of the best aspects of team building is finding talent and value later in the NFL draft. Selecting potential key contributors on day three of the draft is not easy but rewarding. NFL teams are always searching for the proverbial “diamond in the rough.” The Tennessee Titans selected EDGE Rashad Weaver in the fourth round of the 2021 NFL Draft with that hope in mind. Weaver was a productive pass rusher for the University of Pittsburgh. He finished with 20 sacks and 73 hurries in his college career.

The Titans needed more depth and talent at the edge rusher position. This defense had a developing Harold Landry III and free-agent acquisition Bud Dupree penciled in as their top edge rushers—placing Weaver in a rotational/reserve role. Unfortunately, Weaver’s rookie campaign ended early due to a broken Fibula. Fast forward a year later, Weaver is beginning to find his footing for this Titans’ defensive front.

Although he continues to work off the bench, Weaver is making his presence felt on opposing offenses. He has accounted for 14 hurries, eight QB hits, and five sacks through eight games this season. The Titans’ pass rush has benefited from his production, especially being without their top pass-rusher in Landry.

Weaver is showcasing that his speed, speed-to-power conversion, and arm length translate to the league. In his true “rookie” year, Weaver is improving week after week. His pass-rush plan is evolving based on his opponent’s strengths and weaknesses. He is alternating his pass-rush moves to defeat offensive tackles and deconstruct blocks.

Right now, Weaver’s value is purely on pass-rushing downs, he has less than 100 snaps versus the run this season. The Titans understand where the bread is buttered. Weaver is coming off the best game of his short career last weekend versus the Denver Broncos. He was as disruptive as they come, with three pressures, hits, and two sacks. A relentless motor and approach are a big part of Weaver’s success.

His performance last weekend could be viewed as breakout-caliber. These types of performances can build a player’s confidence and rightfully so. The coach’s confidence in Weaver is bound to grow as well, leading to more opportunities to produce. This is a good position for the Titans to be in for their present and future.

Landry is due to return from his ACL injury next season to pair with a budding Weaver. They must pay their best player Jeffery Simmons and will look at potential cap casualties to make this happen. Does the emergence of Weaver make Denico Autry and/or Dupree expendable? This is a possibility; Dupree has an out in his contract after this season. Cutting Dupree would help the Titans’ cap space, allowing for more flexibility to keep their defensive cornerstone.

To say the least, Weaver’s emergence is not just a win on the football field for 2022. Finding this potential gem has positive implications for their future defensive rotations. I will have my eyes on Weaver for the continuation of this season. Watching for more growth and development within his game.

Keep your eyes on Rashad Weaver!