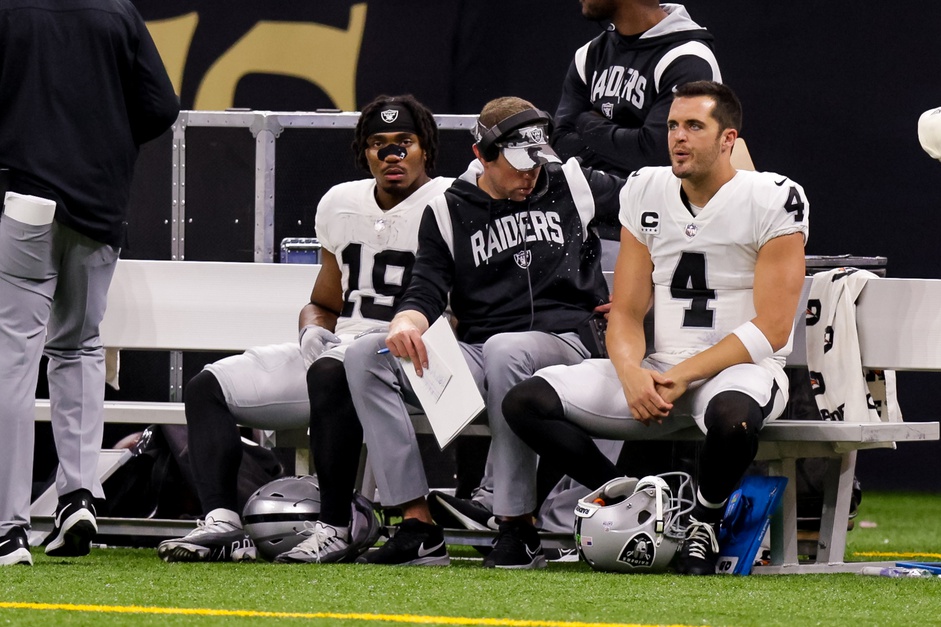 The Las Vegas Raiders’ Derek Carr era is coming to a close. In what has long looked like a lost season for the team, Carr’s recent performances have been especially terrible. So with the Raiders all but mathematically out of the playoff race, they must look toward next year and whether Carr is a part of their future plans. Benching him was just step one.

As early as the first game of the season, the Raiders’ nine-year starting quarterback started to show signs of struggling in the new offensive system spearheaded by head coach Josh McDaniels. He completed fewer than 60% of his pass attempts in the game, throwing two touchdowns and three interceptions while also taking five sacks, the most in a game since 2018. It hasn’t improved since then.

Fifteen weeks later, Derek Carr leads the league with his 14 interceptions, is third-worst in the league with his 60.8% completion percentage (behind only the Wilsons, Zach and Russell), and is a bottom-eight quarterback in the NFL by passer rating (86.3). That’s in part due to his up-and-down performances throughout the year, but it’s been especially impacted by the recent, four-game stretch that has been especially bad.

Just when it looked like the Raiders might be turning things around in time to make a late playoff run, their quarterback has become one of the main culprits holding them back. Carr hasn’t completed more than 55% of his pass attempts in any of his last four games. He averaged fewer than 200 passing yards per game in that span and threw seven interceptions to just six touchdowns. Las Vegas is 2-2 over those four games with each one having been decided by one score. Carr averaged just 155.5 yards per game in the two losses.

Now that Carr has been benched, the doors have opened up for the team to move on from him ahead of next season. He clearly doesn’t fit the scheme McDaniels brought with him to the desert and as a result, probably doesn’t fit the vision McDaniels and new general manager Dave Ziegler have for the future of the team as an inherited piece. Benching Carr is both a strategic move allowing Las Vegas to see what they have in-house and a financial move to avoid having to pay Carr more than $40 million should he get injured in the final two games of the season.

In addition, if the team is able to cut ties with Carr via a trade ahead of the new league year, they would save more than $25 million in cap space—but there’s always a risk a deal falls through, which complicates financials. Carr also has a full no-trade clause and can control where he gets moved to.

As the Raiders move to hit the reset button at quarterback, many teams around the league could come calling for an above-average veteran signal-caller like Derek Carr. Think of teams like the Jets, who have seemed to be a quarterback away all season, or the Dolphins, whose future at quarterback just got a whole lot murkier this week. With the news out of Las Vegas on Wednesday, this offseason is shaping up to be another exciting one with plenty of quarterback movement around the league.