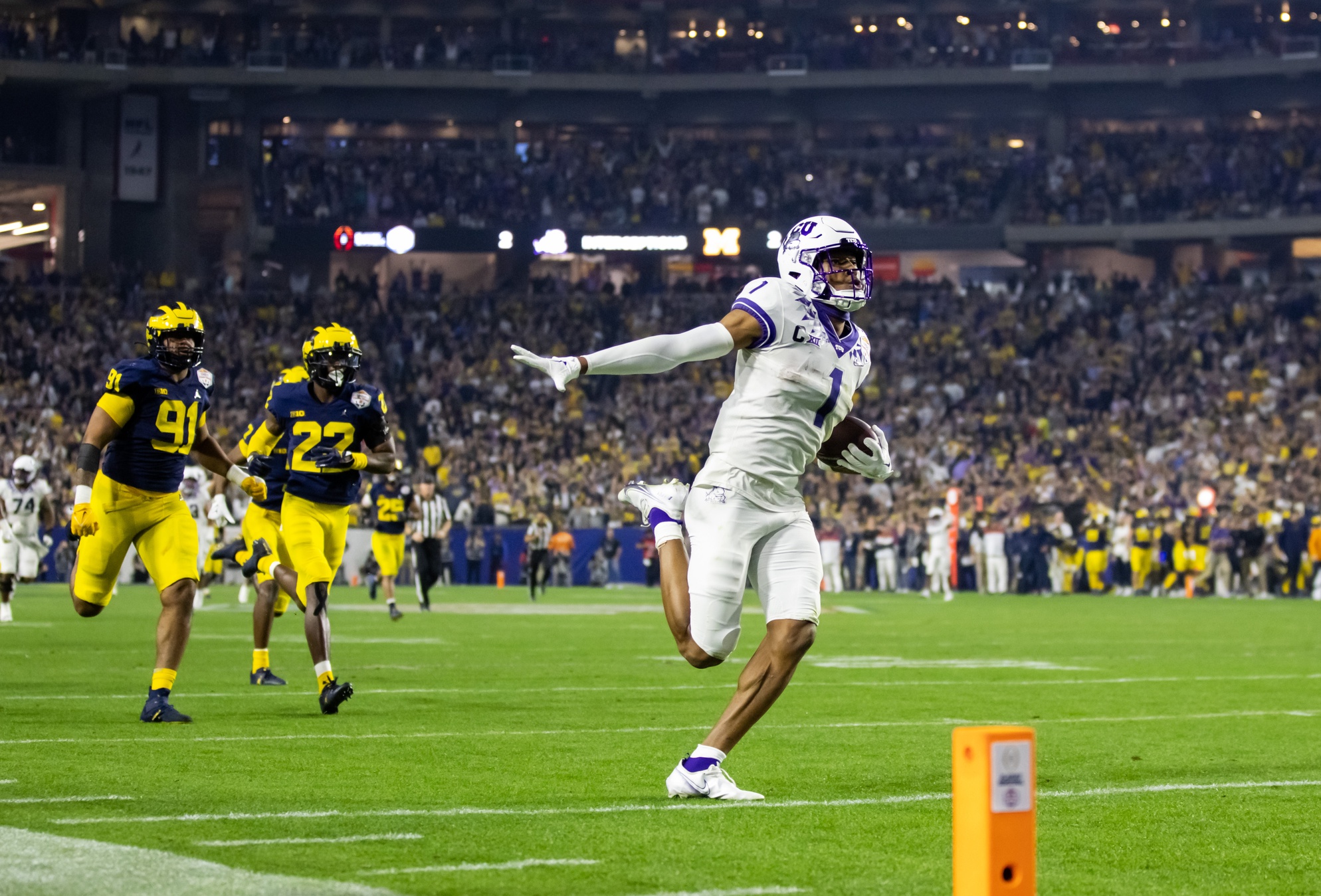 The No. 1 wide receiver spot on 2023 NFL Draft big boards has seemed to turn into a two-man race between USC’s Jordan Addison and TCU’s Quentin Johnston. On Saturday evening, Johnston landed one of his biggest blows in the quote-unquote “WR1 title fight” with a monster performance on a huge stage: the College Football Playoff Semifinal.

With Addison sitting out USC’s matchup with Tulane in the Cotton Bowl on Monday, Johnston had an especially significant chance to raise his draft stock in the Fiesta Bowl on Saturday. He stepped up in a big way, putting up 163 yards and a touchdown on six catches. All the while, Johnston proved why he’s worth one of the top picks in this year’s NFL draft.

The TCU product’s best traits have always been his big frame and the impressive speed and acceleration he has for his size. Johnston is a big-bodied, true X receiver that can get downfield in a hurry before winning at the point of the catch with his size. But even at his size, he has the short-area quickness to excel when working on short routes like slants and digs over the middle of the field before letting his speed take over to generate yards after the catch.

He won in both facets on Saturday, quickly eating up defenders’ cushions in coverage with his speed to find himself open downfield and using his quickness and athleticism to make big plays out of short catches.

QUENTIN JOHNSTON 76 YARDS TO THE HOUSE!!!! THIS GAME IS INSANE!!! 🔥🔥 #FiestaBowl pic.twitter.com/lZlKuKDDbp

That breakaway speed for anyone—let alone at that size—is plenty to get any NFL team to take notice. Johnston’s measurables alone all but guarantee that he should be able to contribute in a big way at the NFL level. On Saturday, he proved he can perform under the bright lights in the biggest moments of the season for his team, which should only serve to improve his standing in the eyes of scouts.

As great as Johnston’s big plays are, they’ve been some of the only reasons he’s been so productive this year. He’s been a very boom-or-bust receiver in that he can sometimes disappear for long stretches of games without a target or a catch. Part of that is Johnston’s inability to get good releases consistently off the line of scrimmage. He has a tendency to get jammed easily in press coverage, throwing him off of his route early and letting defenders make plays on the ball in the quick game.

Will Johnson vs Quentin Johnston on 3rd down! #Michigan #FiestaBowl pic.twitter.com/ruIP7VENj3

Still, Johnston’s impressive performance in the biggest game of his career surely raised his (already high) draft stock. He’ll have one more chance to show out on a massive stage in the College Football Championship next Monday against a Georgia secondary that’s allowed 850 passing yards in their last two games. If he can find a way to keep booming with fewer “bust” plays in which he gets jammed, Quentin Johnston can take a commanding lead in the WR1 race to end the college football season.