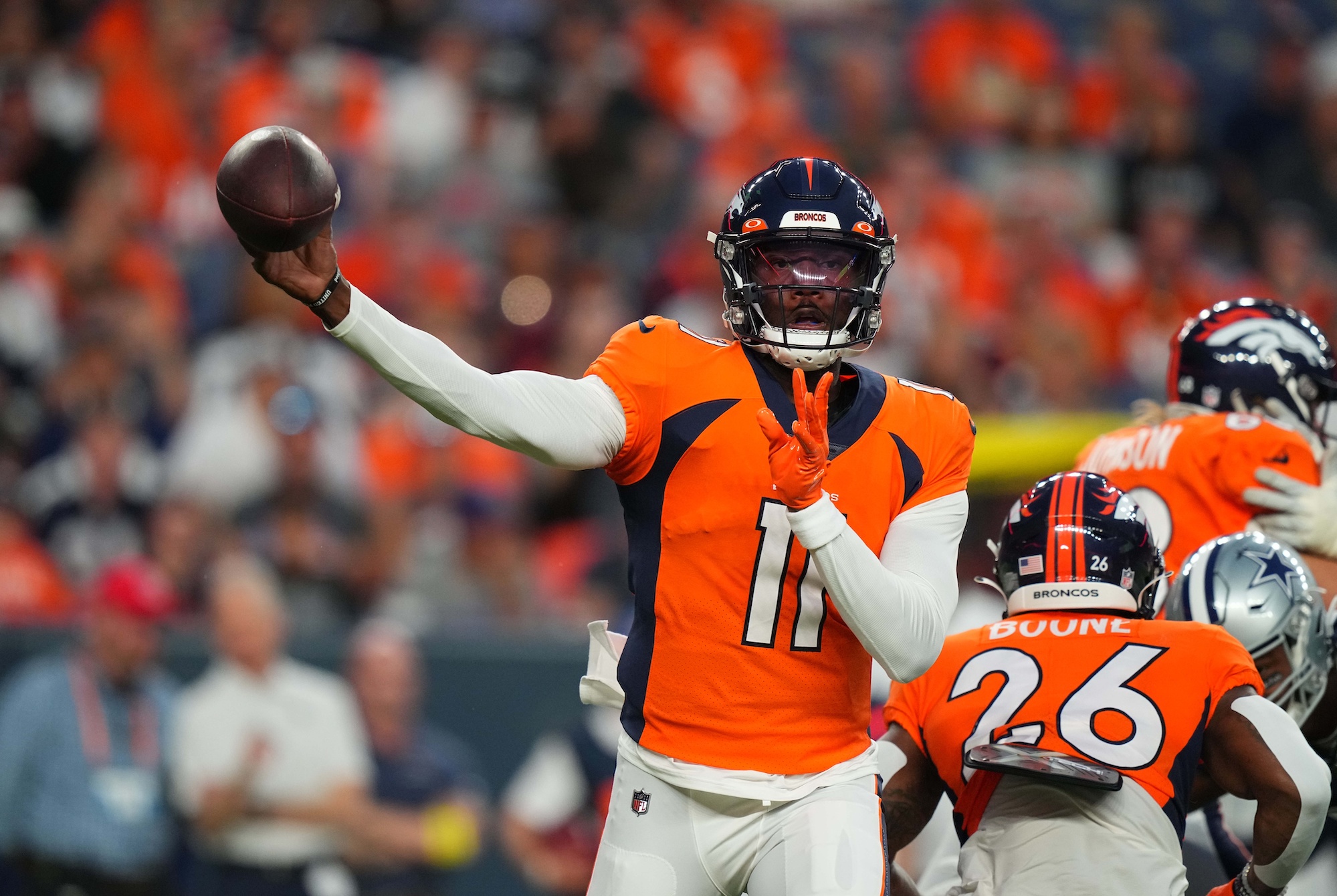 The New England Patriots and New York Giants may both look to add quarterbacks this week. The Patriots were forced to turn to rookie quarterback Bailey Zappe at Lambeau Field on Sunday following a head injury to veteran Brian Hoyer. Hoyer was starting in place of Mac Jones, who suffered a serious high-ankle sprain in Week 3. It left the Patriots with the inexperienced Zappe and no backup quarterback. The Patriots don’t currently roster a signal-caller on their practice squad.

The Giants find themselves in a similar predicament. Giants quarterback Daniel Jones momentarily departed Sunday’s win over the Chicago Bears with an ankle injury. Jones’ replacement was Tyrod Taylor, who quickly exited the contest with an injury of his own and entered the concussion protocol. Saquon Barkley took over as a wildcat quarterback while Jones returned to play receiver in emergency wildcat looks. It indicates Jones wasn’t healthy enough to play under center.

The Giants may be a bit less desperate than the Patriots because they do have Davis Webb on the practice squad. It shouldn’t prevent Giants general manager Joe Schoen from working out quarterbacks and exploring the market.

We’ve swiftly identified five quarterbacks both the Patriots and Giants may consider adding before Week 5 announces its arrival.

How Barkley Fits Patriots: The 32-year-old Matt Barkley is a veteran quarterback that’s become a journeyman for teams in need. Barkley is a highly experienced signal-caller. Barkley is one of the best quarterbacks currently on an NFL practice squad. The Patriots don’t possess any obvious ties to Barkley, but they’re innately familiar with his skill set and abilities given that Barkley’s now in his 10th professional season. They’d also be plucking a quarterback from their rival Bills.

How Barkley Fits Giants: Schoen and head coach Brian Daboll arrived in East Rutherford as a package deal from Buffalo. Barkley currently resides on Buffalo’s practice squad—this is Barkley’s second stint in Buffalo. He previously spent three seasons with the Bills (2018-20). Both Daboll and Schoen spent time alongside Barkley in Buffalo. Familiarity is the reason why Webb is on the Giants’ practice squad (Webb is another former Bill). The Giants can pluck Barkley away from Buffalo by offering him an immediate spot on their 53-man roster.

How Fromm Fits Giants: Fromm is a rare option that possesses ties to both the Patriots and Giants. Schoen played a sizable role in drafting Fromm in Buffalo as the Bills’ assistant general manager. Daboll also served as Fromm’s offensive coordinator for the better part of two offseasons (2020-21). Giants quarterbacks coach Shea Tierney also coached Fromm in Buffalo.

How Blough Fits Patriots: David Blough is currently on the practice squad of the Vikings after failing to earn a final roster spot with the Lions. Patriots offensive play-caller Matt Patricia spent 2019 and a portion of the 2020 campaign coaching Blough in Detroit as the Lions’ head coach. Several current Patriots coaches were a part of Patricia’s staff in Detroit, including assistant offensive line coach Billy Yates. New England’s next opponent? The Lions, who Blough played for from 2019-22.

How Blough Fits Giants: Blough is one of few quarterbacks on a practice squad that has thrown for more than 1,000 yards throughout his NFL career. Blough has five career starts and has attempted approximately 200 regular-season passes. The Giants must add an experienced quarterback. Blough is also extremely familiar with the Giants’ upcoming opponent, the Green Bay Packers. Blough spent three-plus seasons applying his trade against the Packers in the NFC North.

How Peterman Fits Patriots: Nathan Peterman has spent several months in Chicago and the NFC North. New England’s next opponent is the Lions, a common opponent of the Bears. The Patriots are also familiar with Peterman via his two-year stint in Buffalo and the AFC East. Peterman is likely to make an appearance on New England’s shortlist.

How Peterman Fits Giants: Peterman is on Chicago’s practice squad as the Bears’ No. 3 quarterback. The Bills drafted Peterman in the fifth round of the 2017 NFL Draft. That was Schoen’s first draft as Buffalo’s assistant general manager. Daboll also served as Peterman’s offensive coordinator in 2018. Many forget Daboll and the Bills actually named Peterman their opening day starter ahead of Josh Allen in 2018. If the Giants are searching for a veteran NFL quarterback whom they’re familiar with, Peterman checks a lot of boxes.

How Johnson Fits Patriots: The 36-year-old Josh Johnson is undeniably the most experienced quarterback that’s currently on a practice squad. The Patriots are surprisingly one of few teams Johnson hasn’t represented at the professional level. If the Patriots are searching for an emergency QB that can get them through a Sunday, Johnson is an appealing option. Johnson also spent some time alongside Patricia in Detroit in 2019.

How Johnson Fits Giants: The logic would be similar. The Giants can’t lean on Barkley in the wildcat formation for four quarters. Johnson is arguably a better option than practice squad quarterback Webb. The aging Johnson has connections to about every staff in the league. Johnson spent 2021 with the Baltimore Ravens and current Giants defensive coordinator Don Martindale. Johnson last played for the Giants in 2016.