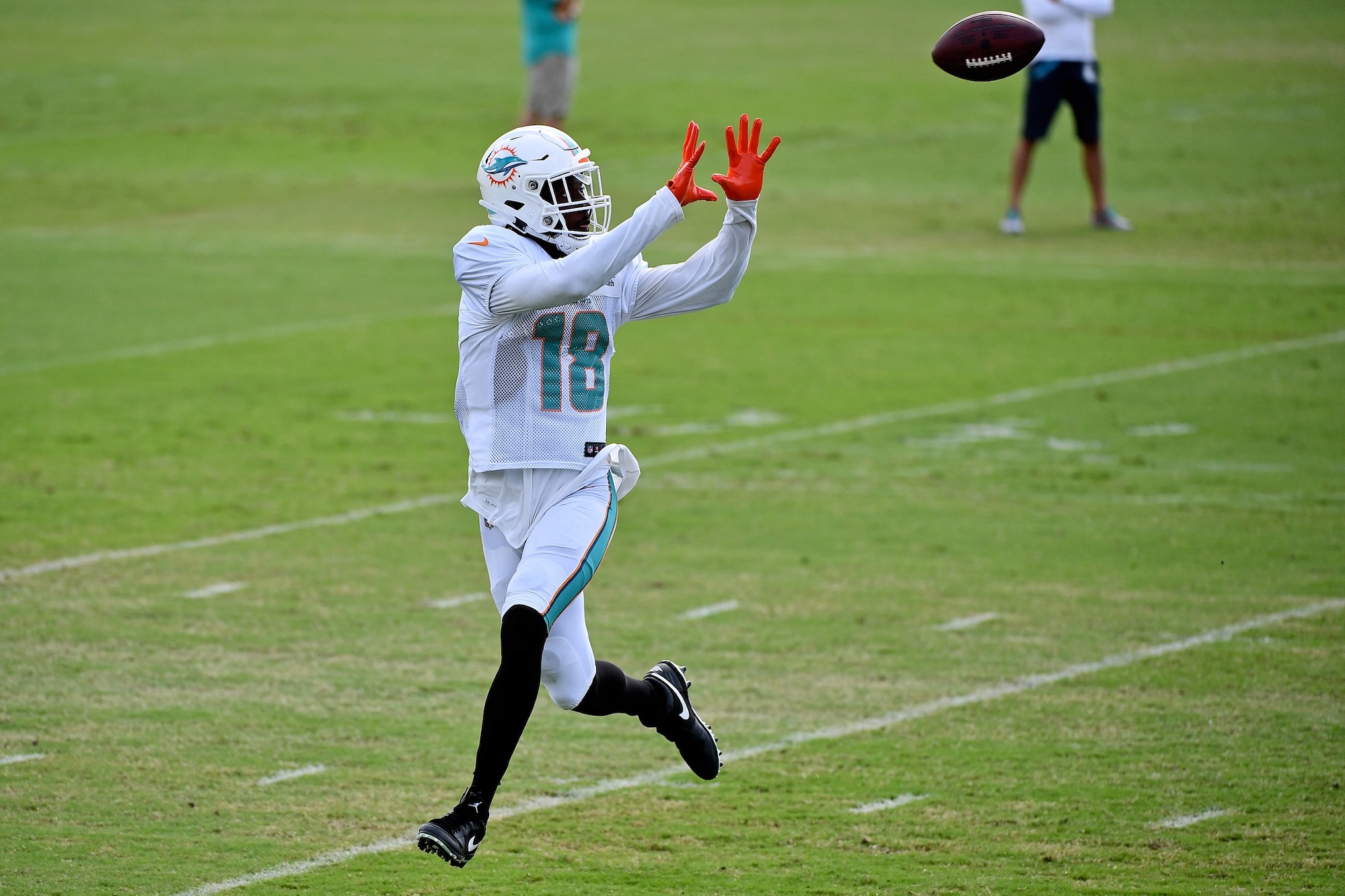 You will have a hard time finding a more improved room in the NFL this summer than that of the Miami Dolphins’ wide receiver room. Amid the reported and apparent peeks by the Dolphins to upgrade their quarterback position over the past few years, the team actually committed to zag instead of zig: they gave the quarterback they’ve got more players at his disposal to throw to. And the results are, well, they’re dramatic.

Miami’s 2021 wide receiver room boasted a rookie record-setter in Jaylen Waddle and a cast of characters that comprised of talent that teased you with flashes but never stuck:

Waddle and Parker were the only two wide receivers on the roster to total more than 25 receptions on the season. Wilson (25 catches) was third among those in the room. Hollins was fourth with 14. Miami’s receivers ran deep but the production (and talent) didn’t. And with a new offensive system coming into play, the Dolphins made this offseason about putting in place a system and supporting staff that had something Miami’s receivers had been missing for years: depth and balance.

Fast forward to Tuesday’s first padded practice of training camp. Miami welcomed back just three players from last year’s top 10 wide receivers from the offseason (and in-season) roster: Waddle, Bowden Jr., and Williams. Waddle, a top draft selection from 2021, was a no-brainer. Bowden Jr. was a player the team bet on in 2020 but didn’t get any glimpses of after a hamstring put him on the shelf during the preseason in 2021. His return as a player on a rookie contract was obvious as well.

But then there’s Preston Williams. Williams came to the Dolphins as a UDFA in 2019 and immediately made an impression on the coaches with his physical gifts. He was a productive player for Miami through the first half of that rookie season before an injury sidelined him for the rest of the year. 2020 came and went with another injury-shortened season and about half the production as his rookie campaign—and then 2021 with just six receptions for 71 yards on the year. And yet, despite the regression over those three years, Miami made the decision to offer and sign Williams to a one-year extension, putting him in Miami for a fourth season and allowing him to be the third and final holdover from last year’s disastrous position group.

All that for Williams to…make the most of this opportunity? Hardly.

It appears unlikely that Williams will even make the team at the end of the summer. Williams himself first signaled his displeasure with a tweet on Monday night:

That doesn’t leave a lot of room for misinterpretation. But if Williams’ tweet cracked the door for the world to see his displeasure, the fourth-year wide receiver on a “now or never” deal with Miami kicked the door down during his post-practice media availability. This is a situation that may well have been left alone without a second contact.

Dolphins WR Preston Williams went public on Monday with his frustration about a lack of opportunity and he said “it was the same” today — no extra reps. #FrontOffice33 | #FinsUp pic.twitter.com/JsXX2ErRpV

Williams reiterated to the media in attendance that he wasn’t getting the kind of opportunities he felt he deserved to showcase his ability. And Williams also stated that he didn’t feel any different after sharing his opinion of his situation and then practicing today. This is a new wide receiver room with new coaches on the offensive side of the ball—and Williams doesn’t have numbers on his side. The overhauled wide receiver room boasts a lot of investment elsewhere.

Two first-round pick investments, a $7 million per year WR3, a fourth-round rookie, two players with prior experience in head coach Mike McDaniel’s system, and fellow holdover Bowden Jr. The top three are set in stone—plus Ezukanma as a draft selection this year feels like a shoo-in. That places Williams firmly in competition with Bowden Jr., Sherfield, Sanu, Sanders, and the others to be WR5 or WR6, assuming the Dolphins carry that many amid a crowded tight end room and a surprisingly busy running back room that will also carry a fullback on the 53-man roster.

This feels like a situation that is accelerating quickly toward a resolution, and it’s difficult to find outcomes that include Williams as a Dolphin in 2022. Sanu and Sherfield offer similar physicality and, in Sherfield’s case, special teams ability. Bowden Jr. is a much more versatile weapon. I don’t think there are more reps coming for Williams in practice.

This brings Dolphins general manager Chris Grier to center stage. Grier worked his magic last season on the trade market in finding a buyer for veteran kick returner and receiver Jakeem Grant. That deal, which was made with Grant in the final year of his restructured contract, netted the Dolphins a sixth-round draft choice in 2023. Could Grier strike another deal with a wide receiver-starved team to collect some late-round draft capital?

There may be some interested teams, but Grier will need to sell the interest in the player in order to get a team to bite as compared to them just waiting for Miami to cut him and subjecting him to waivers. Are there any teams willing to review that 2019 tape and see the player Williams once projected to be and pay a price to get him in the building?

Another thing the Dolphins could leverage if they try to move Williams and prompt a trade is the fact that he is apparently much lighter this season than last. He told reporters on Tuesday that his weight was way down from the 230 pounds he played at in 2021. That change in body composition could help bring back some of the explosiveness Williams has been seemingly missing since a foot injury ended his 2020 season against the Arizona Cardinals.

I’d say Williams being traded before being cut is unlikely as a player in a contract year, but Grier has worked his magic in this situation before and cashed out with a late draft pick. And, after hoarding as many wide receivers as the team could get their hands on to sufficiently provide a supporting cast for Tua Tagovailoa this season, Grier may once again have the surplus needed to make Williams readily expendable. And, just as importantly, the ability to create the leverage needed to prompt a deal. For his part, Williams’ willingness to voice his displeasure is pushing things closer in that direction as training camp gets into full swing.