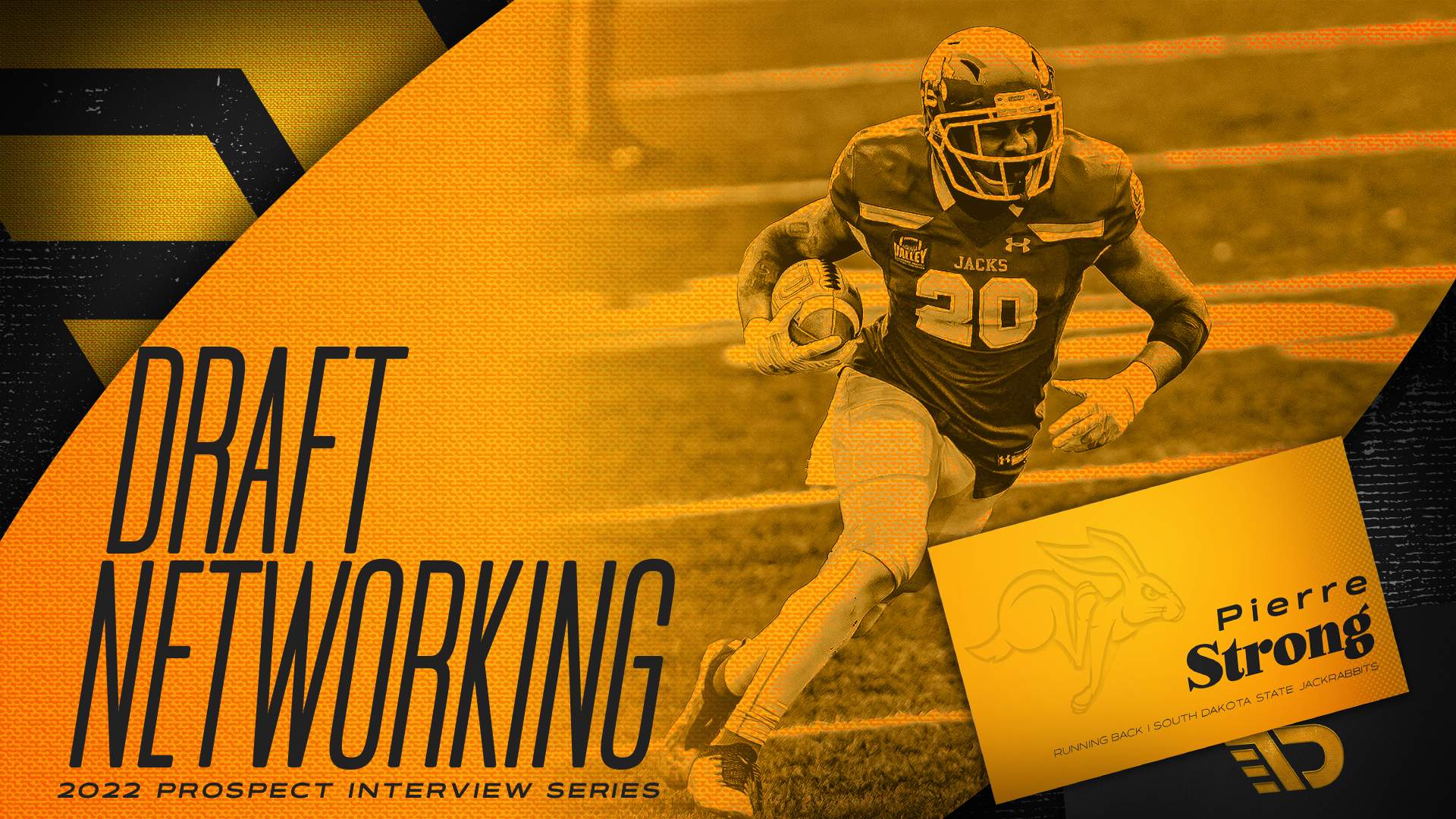 South Dakota State’s Pierre Strong Jr. is one of the most exciting running backs available in the 2022 NFL Draft. An excellent athlete with blazing straight-line speed, Strong is a threat to score every time he receives the ball in space.

As a ball-carrier, Strong showcases excellent vision and the quick feet necessary to identify and take advantage of cut-back opportunities. An explosive and dynamic player, Strong’s pro projections are ascending.

Strong recently spoke exclusively with The Draft Network regarding his electric 2021 campaign, how he developed his running style, his skills as a pass-catcher, how he plans to shed the “small school” label, his unbelievable performance at the NFL Scouting Combine, his inspiring community, and so much more.

JM: What a season you had in 2021. You recorded an astounding 1,686 rushing yards and 18 touchdowns while averaging seven yards per carry. How do you reflect on your final collegiate campaign?

God doesn’t make mistakes. When you put everything into it like I did, pour all that blood, sweat and tears into bettering your craft, the outcome will always be amazing.

JM: I love that. On tape, I see an exciting runner with great vision and an instinctive feel for cut-back opportunities. How did you develop that aspect of your game?

PSJR: I definitely credit my vision. I feel like I can see everything back there ranging from back-side cuts to front-side cuts. I have great vision as a ball-carrier. With the cutbacks specifically, I like to read slowly and patiently.

As a running back, you have to maintain some patience and read things slowly. You have to read and analyze the flow of the offensive line, defensive line, and linebackers. The cutbacks are there when you have great vision like I do. They’re for the taking. I’ll start one way and cut back the other way. That perfectly describes my running style.

JM: It pops on tape. You recorded 42 catches at SDSU. Today’s NFL offenses place a ton of emphasis on running backs that can catch the ball. Tell me about your skill set as a pass-catcher?

PSJR: I’m extremely comfortable as a pass-catcher. I’d rate my hands a 10/10 personally (laughs). I feel like I have some of the best hands as a running back in this draft class. You said it yourself. It’s so important to be able to catch the ball coming out of the backfield in today’s game.

JM: You look smooth catching the ball on tape. You’re a dangerous home run hitter so I have to ask, what do you prefer, a 75-yard touchdown run, or touching the ball six or more times on a long scoring drive?

PSJR: Man, that’s tough. I definitely like the 75-yard touchdown on my first carry of the game. I like that too, but I ultimately have to go with the six touches on a longer scoring drive. That allows me to get warmed up. I can grow into the groove of the game that way. I feel like I’m warmed up after that first hit. After a few more hits after that, I’m definitely warmed up and ready to go (laughs). I’ll take the six carries option.

JM: I love the thought you put into that. You went to the NFL Scouting Combine and blew the lid off Indianapolis. You ran the 40 yard dash in a blazing 4.37 seconds. You also jumped excellent vertical (36 inches) and broad jumps (124 inches). How do you reflect on that overall performance?

PSJR: That was nobody but God right there. I worked so hard for that. I’ve been working my entire life, but the last few months leading to the combine specifically, we really ramped up my training schedule for those drills and whatnot. We made the combine my main focus for a little while.

I worked so hard. I won’t pat myself on the back though because the job’s not done yet. I’m still grinding and working out to this day. I do feel like I did an amazing job at the combine.

I was one of the top-performing running backs in attendance. I was being slept on and I had to wake a lot of people up. Like I said earlier, that was God’s work. He shined down and blessed me on that day.

JM: Do you feel like you surprised some people in Indianapolis?

PSJR: Oh yeah, I definitely did. I think I surprised a lot of people with that performance. A lot of people didn’t think I was going to run as fast as I did. I know some people that had me down as a 4.5 guy, high 4.5s, and crazy numbers like that (laughs). I know I shocked the entire world when I ran that 4.37.

JM: You sure did. Have you met with any teams virtually throughout the process, and do you have any in-person Top 30 visits coming up?

I’ve interviewed and spoken with so many teams. I have a few more coming up. Things really started picking up after the combine. Everything is beautiful right now.

JM: There’s a lot of interest in you and it’s easy to see why. Which running backs did you admire growing up? Do you model your game after anybody?

As for today’s game, I try to model my game after guys like Christian McCaffrey, Alvin Kamara, and Antonio Gibson, the running backs that can do everything. They can run the ball, and catch coming out of the backfield. They’re excellent blockers as well. Of course, they run the ball at a high level and score touchdowns, too (laughs).

I can see myself mirroring my skill set after guys of that nature. I want to catch the ball and block in the backfield. I want to be so impactful as a pass-catcher that my team sets up routes for me.

JM: Those are terrific players to analyze and model your game after. You’ve been so productive, but some people are still going to label you as a “small-school” prospect. How do you typically respond to that label?

PSJR: Like I said earlier, God doesn’t make mistakes. He put me at South Dakota State for a reason. When people say that, I just use it as a chip on my shoulder. I didn’t have any big-time offers coming out of high school.

I was fortunate to even get an offer from a program like South Dakota State. I didn’t have a single Power-5 offer. I had to keep that intensity and rely on that chip on my shoulder.

Every time I can prove somebody wrong, I take advantage of that opportunity. I welcome it. When we played against Colorado State, I had a wonderful game. We played against Minnesota back in 2019 and I was proud of my performance. Every time we played against a bigger opponent, I tried to show the world that I belonged with the big boys, and that I could play on a bigger stage that extends beyond the FCS.

I always keep that chip on my shoulder. I just have to prove everybody wrong. Anybody can say these things, but you have to prove it. That’s what I intend to do. I’m ready to do it.

JM: I’m going to end things on that note because that’s a terrific answer. I’ve really appreciated your time today. In closing, what kind of impact is Pierre Strong Jr. going to make at the next level?