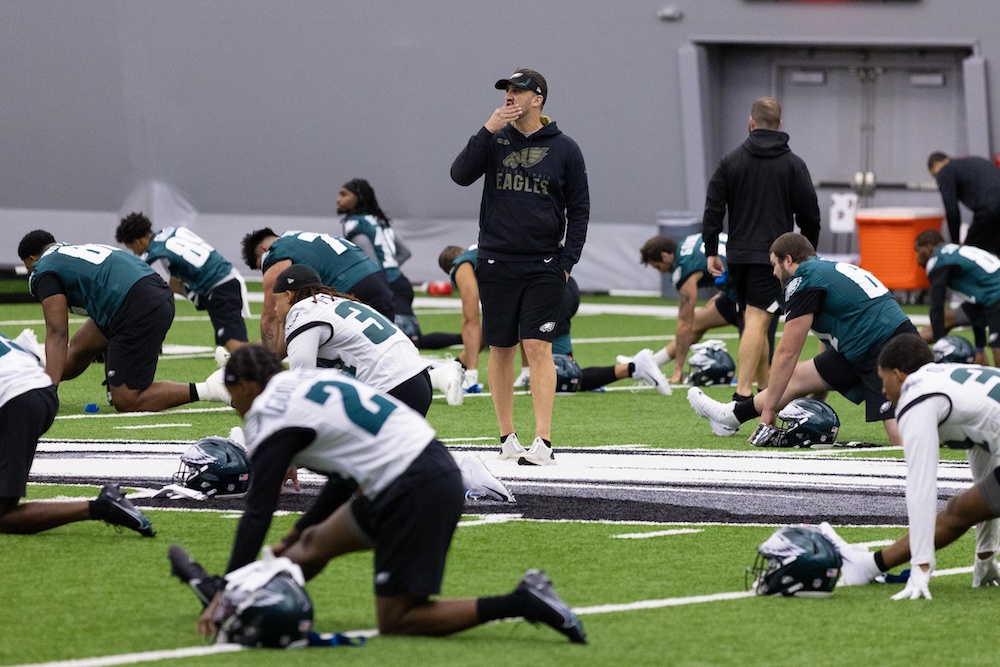 No matter how good a team might be in a given season, being repeat divisional champions in the following season is by no means a guarantee. Every team gets its chances to make improvements, and almost every strong team ends up losing at least some of their biggest contributors. That’s what makes the case for the NFC East so interesting – especially the Philadelphia Eagles.

Yes, the 2021 Dallas Cowboys rode a strong season from quarterback Dak Prescott, a 1,000-yard season from running back Ezekiel Elliott and their strong defense to a comfortable lead in the division. A year after going 6-10 and a third-place finish in the NFC East, Dallas won the division by three games.

Meanwhile, Philadelphia was putting together a strong 2021 season of their own. Many remember their last game of 2020, in which the at-the-time 4-10-1 Eagles benched rookie quarterback Jalen Hurts against Washington in favor of Nate Sudfeld. The move got their Super Bowl-winning head coach, Doug Pederson, fired.

Only one year later, newcomers like Head Coach Nick Sirianni and wide receiver DeVonta Smith helped propel Hurts to a much better second season and the Eagles to the playoffs. Philadelphia finished 9-8 in a season in which very few people thought they’d be competitive and suddenly made the NFC East look much more competitive.

Elsewhere in the division, things haven’t looked quite as pretty in recent years.

Washington may have made the playoffs in 2020, but that was only because they won an exceptionally weak division with a 7-9 record. Quarterback Taylor Heinicke played well but wasn’t able to lead his team to an improvement over their 2020 record. The Giants, meanwhile, continued to look completely lost under their second-year head coach, Joe Judge, and only got worse as the season went on.

Then came this offseason, a period that brought big changes around the league with the NFC East being no exception. Just two years after no team finished with a winning record, the division could be seeing a competitive, three-team (sorry, Giants fans) race to the top.

For several reasons though, signs point to the Cowboys not repeating as division champions. Instead, it’s the Eagles who will be bringing another NFC East title to their franchise. As compared to the other contenders, Philadelphia looks far above the competition as far as the offseason acquisitions they’ve managed to bring in.

Yes, Washington got a couple of new quarterbacks and some other offensive help, but those new quarterbacks are struggling veteran Carson Wentz and rookie Sam Howell. The team also missed out on drafting one of the top receivers in the draft class by trading back in the first round. Receiver Jahan Dotson, running back Brian Robinson Jr. and Wentz aren’t nobodies; Washington is going to be a better team—at least offensively—than they were last year. It’s just hard to say those additions are enough to bring them into playoff contention

Their defense should still be strong, especially if linebacker Micah Parsons is as productive as he was last year. It’d be an extra bonus if one of the new edge rushers—Dante Fowler and Sam Williams—prove to be strong replacements for Gregory. It’ll still be a tight divisional race, but the Eagles have done a lot more to help out their team this offseason.

The Eagles’ biggest additions came once the draft rolled around and not only in the form of drafted players.

Star wide receiver A.J. Brown headed to Philadelphia in a trade that sent a couple of draft picks back to Tennessee. The addition of Brown gave the Eagles one of the NFL’s top receiving corps right away with Smith and Quez Watkins rounding out their starting trio. Pascal and Jalen Reagor aren’t bad depth pieces either.

When it came to actually drafting players, the Eagles made some good additions as well. Interior D-lineman Jordan Davis is literally and figuratively a huge playmaker up front, and linebacker Nakobe Dean should thrive behind him the same way he did at Georgia. Philadelphia also got their likely successor to center Jason Kelce—for whenever he retires—in Nebraska center Cam Jurgens.

So, it’s the Eagles—who were already dangerous in the run game, who added pass-catching weapons to make their offense more formidable, who further upgraded their defense and prepared themselves for the future in the draft—that will emerge kings of the NFC East in 2022.