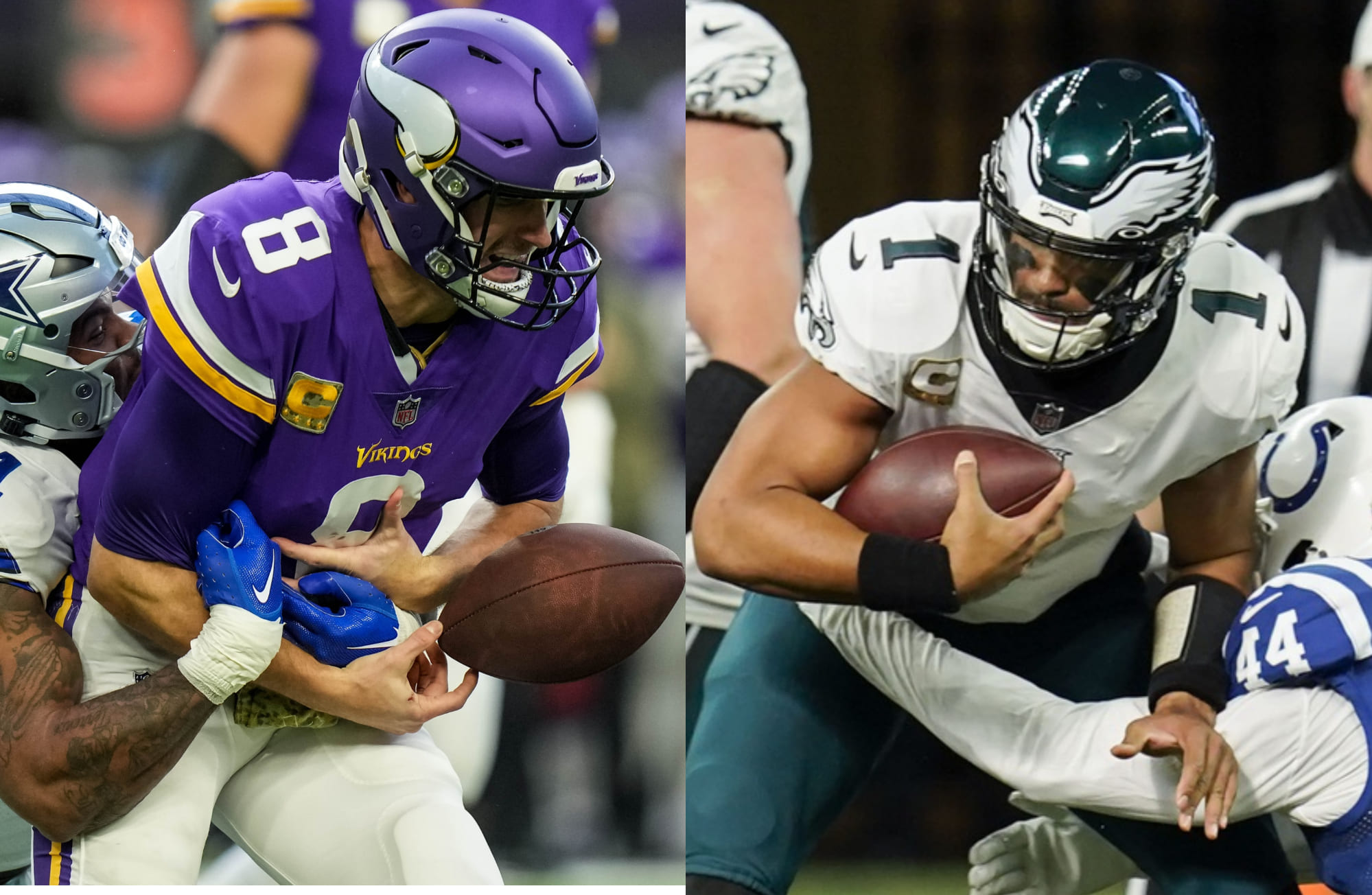 Should Either Vikings or Eagles Be Worried?

Two of the NFC’s presumed elites put forth concerning performances on Sunday. The Minnesota Vikings were thoroughly embarrassed at home, falling 40-3 to the Dallas Cowboys. Meanwhile, the Philadelphia Eagles narrowly escaped with a 17-16 victory over the lowly Indianapolis Colts. Both squads should be somewhat concerned by their recent showings.

Eagles starting quarterback Jalen Hurts led a legendary fourth-quarter comeback to help his squad avoid a second consecutive defeat. Hurts completed 8-of-11 passing attempts in the fourth quarter for 79 yards. Hurts added an additional 51 rushing yards via nine scrambles, including the game-winning score. Hurts totaled 130 yards and two touchdowns in the final quarter while overcoming a 10-point deficit. But the warning signs were there. Philadelphia’s offense looked downright stale and predictable at times.

The Eagles finished 5-of-12 on third down, endured multiple three-and-outs, and punted on four occasions. Nick Sirianni’s squad was whistled for seven total penalties. Hurts was sacked three times and fumbled twice, losing one.

Indianapolis’ underrated defense was unbothered by Philly’s run-heavy approach. The trio of Eagles running backs was held to a combined 55 rushing yards on 17 attempts (3.2 yards per carry). Miles Sanders was at the center of Philadelphia’s run-game struggles, averaging just 3.6 yards per carry via 13 carries.

Sirianni must focus on the basics. Brown’s fumble was Philadelphia’s fourth lost fumble among eligible pass-catchers over their previous two contests. The trio of Devonta Smith, Quez Watkins, and Dallas Goedert all coughed up the football against the Commanders. Ball security must be a priority moving forward.

The Colts and Commanders have written postseason strategies for opposing defenses in January and potentially February. Containing Philadelphia’s rushing attack, Hurts included, makes the Eagles’ offense one-dimensional. Hurts rose to the occasion versus Indianapolis, but defenses will be intrigued by what they witnessed.

Vikings quarterback Kirk Cousins was sacked on a career-high seven occasions and held to 105 passing yards on 23 attempts. As painful as their offense was, Minnesota’s defense was equally as horrid. The Cowboys scored on their opening seven possessions. The Vikings suffered their fifth-largest defeat in franchise history as a result.

The Vikings played abysmal situational football. They were 1-of-11 on third downs and whistled for six penalties in the third quarter alone. Cousins lost a fumble on a blindside strip-sack by Micah Parsons, who totaled 2.0 sacks. The Vikings were held to a pathetic 183 total yards of offense. Backup quarterback Nick Mullens mercilessly replaced Cousins.

The 8-2 Vikings still possess a stranglehold on the NFC North. But Sunday’s showing exposed weaknesses both offensively and defensively. Head coach Kevin O’Connell must respond accordingly.

The NFC lacks an obvious Super Bowl contender. Things became increasingly muddier for the Eagles and Vikings, two of the conference’s Lombardi hopefuls, following Sunday’s performances. How both franchises respond in Week 12 is worth monitoring.