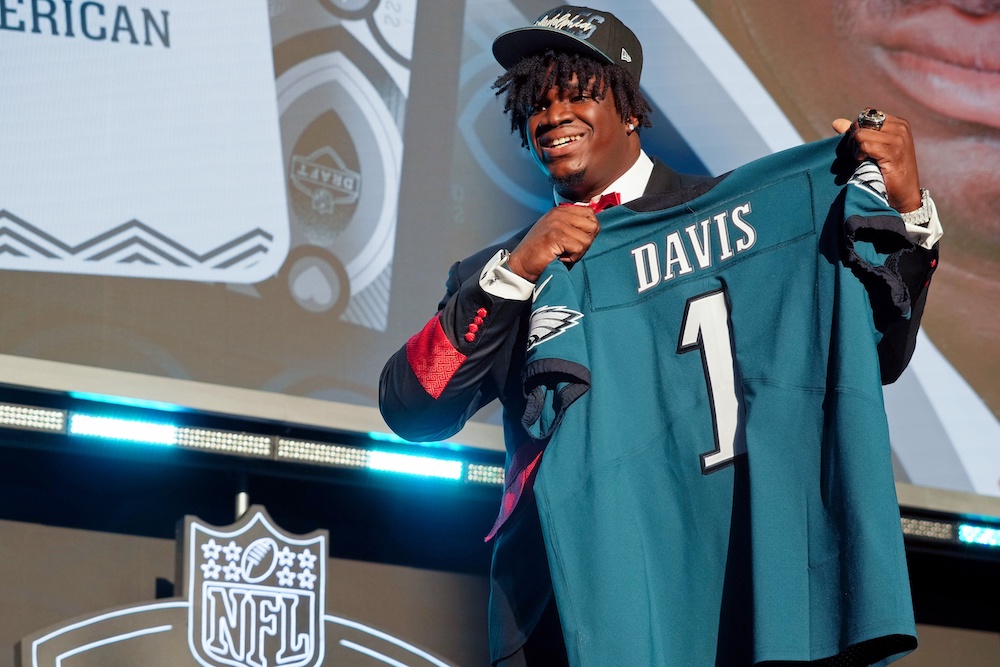 The NFL draft has concluded and most teams feel they have done enough to push themselves closer to being labeled as a contender. Some fans and media personalities find post-draft grades in poor taste but too bad, because I am here to give out the Eagles 2022 draft grades.

We entered the NFL Draft knowing the Eagles had a need on the interior defensive line, especially given that long-time Eagle Fletcher Cox is on an expiring contract. General Manager Howie Roseman decided to trade up two spots to select Georgia’s massive nose tackle Jordan Davis.

Davis is one of the most physically imposing individuals in the class. His massive frame paired with 34-inch arms makes him a difficult task for opposing offensive lineman. In Philly’s 4-3 defensive scheme, Davis will align as the 1-technique, lining up across from either shoulder of the center. He is an immovable object against running attacks, and him and Cox will create an impenetrable wall for opposing running backs to run into with little to no success.

Star center Jason Kelce’s career is coming to an end. The Eagles understand the value he brings to the team and decided to find his potential replacement. The team even consulted him prior to drafting Cam Jurgens. Kelce stated, “Out of all the guys that compare the most to myself, this guy is him.”

Jurgens showcased the lateral quickness and agility to mirror defensive lineman. One of his best traits is his hand strength to latch and maintain his grip. His quickness allows him to snap and get to defenders with reach blocks. Plus, Kelce will be a great tutor for Jurgens to teach him how to manage his aggressiveness. He more than likely sits a year behind Kelce before taking the job for the 2023 season.

The Eagles seem to have a need at linebacker every offseason. They did not select one in the first round and instead, were patient and found their answer in Round 3. Nakobe Dean was the fiery leader for the Bulldogs defense, and is an instinctive and explosive playmaker on the second-level. Not to mention Dean will now be joining his Bulldog teammate Jordan Davis in Philly.

Dean is a three-down caliber linebacker with his ability to play the run downhill and drop back into coverage. He can make the calls defensively and ensure his teammates are aligned properly. Due to his lack of size, Dean will more than likely align as a will-backer, which allows him to play outside in space and make plays on the football.

Kyron Johnson is an undersized, yet athletic defender. Johnson has played inside linebacker prior to 2021, where he played on the edge. He offers great field speed to move sideline to sideline, as well. When Johnson walks up on the edge, he has the speed and quickness to win the corner. However, he mostly projects as a backup ‘SAM’ linebacker and special teamer for the Eagles.

Grant Calcaterra provides depth behind starting tight end Dallas Goedert. He returned to football after retiring due to concussions, which remains a concern going forward with his career. Calcaterra is an effective crosser/over route option. He is competitive as a blocker, sets up tight end delay and leak actions, and his quickness and snap at the top of his route can create sufficient separation. A reliable option against zone coverages and in the middle of the field, the ‘RPO’ and play-action scheme fits his abilities well.

And on top of all that, I must factor in the trade for star wide receiver A.J. Brown from the Tennessee Titans when grading this team’s draft, which puts it over the edge.