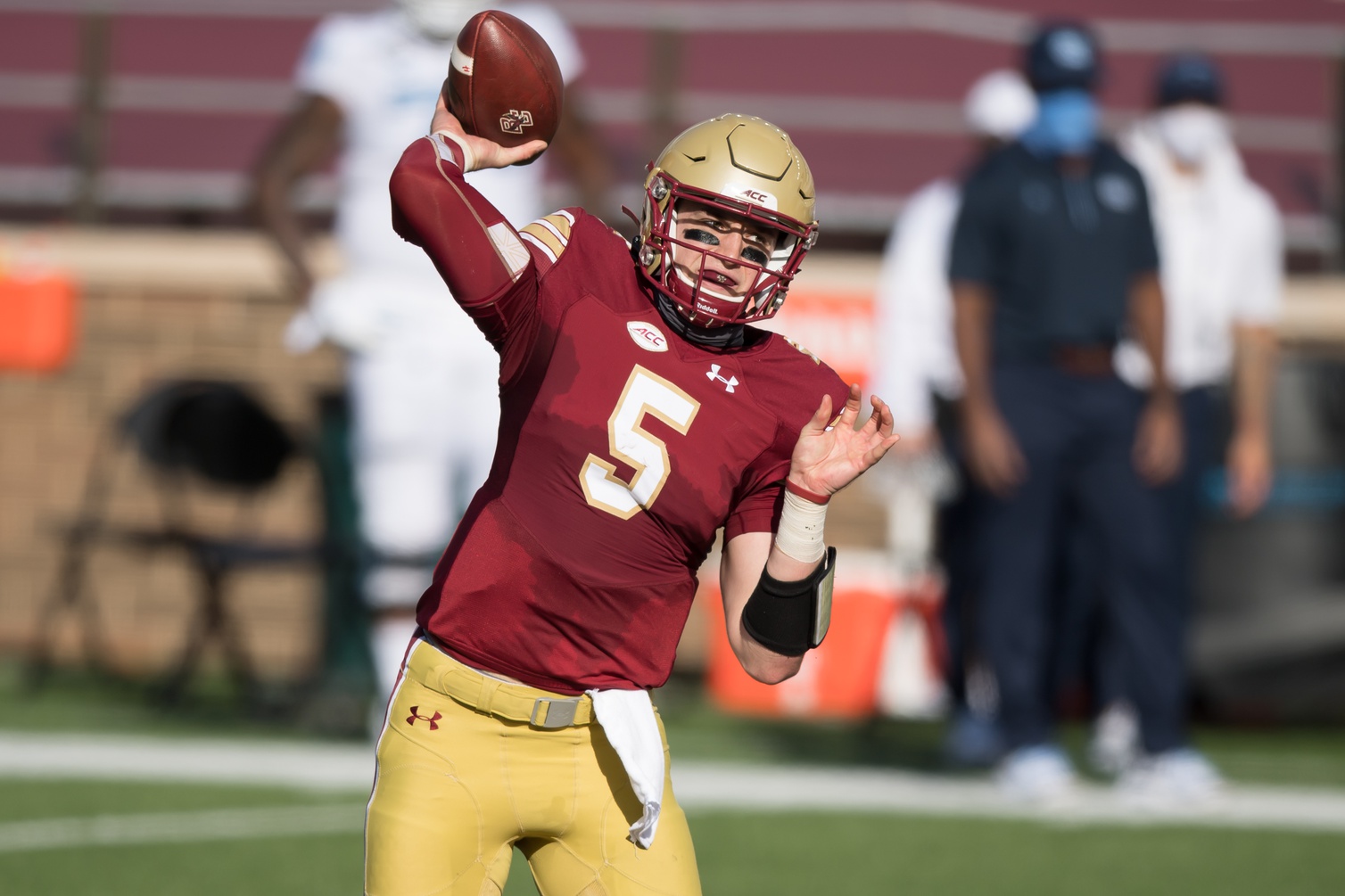 A look ahead to the 2023 NFL Draft features an intriguing group of quarterback prospects. The senior class especially carries the potential to be as impressive as any class in recent memory. Several high-end quarterbacks will aim to prove their NFL worth throughout the course of the upcoming college football season. One of the most promising signal-callers is Boston College quarterback Phil Jurkovec.

Jurkovec is a clear breakout candidate for the 2022 campaign. Jurkovec recently spoke exclusively with The Draft Network regarding the upcoming campaign, transferring from Notre Dame to Boston College, working alongside coach Frank Cignetti Jr., his offseason training regimen, and so much more.

JM: You previously made the decision to transfer from Notre Dame to Boston College. It’s safe to say that decision has paid off for you. I don’t think that can be contested at this point. Now that you’ve had enough time to reflect on that decision, how do you look back on it?

Phil Jurkovec: I look back on my time at Notre Dame and say I would do it all over again. I learned so much from that experience. Attending Notre Dame was my childhood dream school. At the time, I had a shot to go play there and compete for a starting job. I took that opportunity and I learned a ton throughout my time there. I met some great people. It just didn’t really work out for me there.

I didn’t feel like I was becoming a better football player. I had to take a shot and take my talents to a school that I knew would invest in me. It’s worked out for me at Boston College thus far.

JM: It certainly has. At the time, you credited Boston College’s coaching staff as one of the main reasons they stuck out to you as the premier destination. You especially mentioned offensive coordinator Frank Cignetti Jr. You really settled in alongside coach Cignetti during your breakout season in 2020. Cignetti departed the program earlier this offseason for an opportunity to run Pittsburgh’s offense. Boston College replaced him with coach John McNulty, who ironically previously coached at your former program, Notre Dame. How do you view that situation given that you enjoyed playing for coach Cignetti?

Phil Jurkovec: I view the change at offensive coordinator as an opportunity to prove that I can play in different systems. Up until now, I‘ve only really played in one system. It’s going to be a little different for me now.

Coach McNulty has been great for me so far. We didn’t cross paths at Notre Dame because he arrived after my departure from the program. He’s an awesome coach. I really like his system. I think it gives us a ton of opportunities to play fast and score points in bunches.

JM: I want to expand on that a little bit. Cignetti ran a pro-style offense that often featured five or seven-step drops. He utilized complex protection schemes and his receivers ran NFL routes. How did playing in that offense help prepare you for the next level? What are some of the differences you’ve noted in coach McNulty’s system?

Phil Jurkovec: Coach Cignetti had me playing under center and helped me become familiar with more NFL concepts. I learned how to command a huddle and how to read off long, descriptive play calls. It was a true NFL system. I hadn’t really been around that before. It gave me terrific insight into the NFL game. A lot of the plays and the entire scheme made sense to me.

Coach Cignetti’s coaching approach resonated with me. Before that, I had played in a spread offense in high school. We also didn’t do much under center at Notre Dame. Now with coach McNulty, he still has plenty of experience under center. We’re still going to do some of that but we’re also going to play more out of shotgun formation. We’re going to run more quick routes, which should allow us to play fast with some tempo.

JM: What are some of the things coach McNulty has you working on this offseason? How do you plan to carry those things over into the fall?

We’re working on that quick game. I wouldn’t say the reads are getting simpler, but we certainly want to play with more tempo. If we need to get a quick pass, a quick RPO, or whatever, we can take what the defense gives us. We don’t want to overcomplicate things, especially pre-snap when we’re going fast.

JM: That makes sense. Your 2021 campaign was unfortunately derailed by a hand injury, which I imagine was frustrating. What was your mindset like throughout that road to recovery?

Phil Jurkovec: It was definitely tough at first. Getting hurt during the second game of the season, I felt like I was robbed of having that season. The hand or wrist injury actually healed rather quickly. It healed quicker than what the doctors were expecting. I was able to come back toward the end of our season even though I wasn’t at 100%. The muscles and joints around the injury weren’t fully healed when I returned. The thumb was healthy enough to the point where I was safe to play. I decided to come back as soon as I could.

It was a weird year and a disappointing year. It was an injury that happened. That was my mentality. There’s nothing you can do about it.

JM: We appreciate your honesty. As a quarterback that’s experienced playing in a pro-style system, how do you balance being aggressive with taking what the defense gives you?

Phil Jurkovec: I think being aggressive is sometimes taking what the defense gives you. If they’re up in press coverage and not respecting the deep shot, I’m going to take that shot. That’s what they’re giving me.

Football can be a pretty simple game at times. It often does come down to the simple rule of taking what the defense gives you. If they’re giving you the quick stuff, you have to take it. If they’re going to press up and challenge your guys at the line of scrimmage, you need your receivers to win, which allows you to aggressively attack them deep.

JM: That’s an interesting point. Speaking of receivers that can win, I’m curious to hear what you think makes Zay Flowers such a special receiver.

Phil Jurkovec: I think he’s so shifty. He’s able to go from zero to 100 in a moment’s notice. He’s able to stop on a dime. He’s the most dynamic receiver I’ve ever seen or played with at this level. It’s so hard to tackle him in the open field once he gets the ball in his hands. He has such terrific vision as well.

JM: Leadership is obviously such an important trait for a quarterback, especially at the next level. What do you love about playing the quarterback position? What makes you get up every morning and makes you want to attack the day?

Phil Jurkovec: I love the control you have as a quarterback. You go out there and the ball is in your hands on a snap-by-snap basis. You have the opportunity to directly impact the game like no other player on the field. Everybody’s going to look to you as the quarterback. You command the offense. You run the show. You make it happen. You really have to be the field general. That’s partially why I’ve always been drawn to the quarterback position.

The love of the game, my desire to win, that’s what playing quarterback is all about. All of these things led me to quarterback. You can impact the team and be the difference between winning and losing, certainly more so than anybody else.

JM: We love that. I always want to hear how a quarterback responds to the criticisms of his game. Some have said that if there’s one area you can improve in, they’ll look at your athletic ability or knack for moving the pocket. How do you typically respond to that?

Phil Jurkovec: I welcome the criticism. Everybody has their fair critiques. It depends on who’s saying it. The draft analysts and the NFL guys, I’ll definitely pay attention to that opinion. The No. 1 opinion that matters comes from my coaches, however.

Right now, it’s all about my coaches here at Boston College and what they have me working on. Pocket movement and the ability to get the ball out, we’re working on that as we speak. That’s something I’ll continue to work on as long as I play the game.

JM: The desire to get better will take you a long way. Have you had a chance to look at the upcoming schedule? Is there one game in particular that sticks out to you?

Phil Jurkovec: The Notre Dame game certainly sticks out for obvious reasons, having been there and then transferring away from the program. That’s going to be a really cool game, getting a chance to go back there and play against some of the friends I made at the program. I’ve known some of those guys for a long time.

JM: We’re so excited to watch it all unfold. I’ve appreciated your time today. In closing, what are your goals for the 2022 college football season?

Phil Jurkovec: Our goals are to win every game we play this season. We’re going to take things one game at a time. That allows us to focus on the moment and get the next win on the schedule. That’s the most important thing to me.