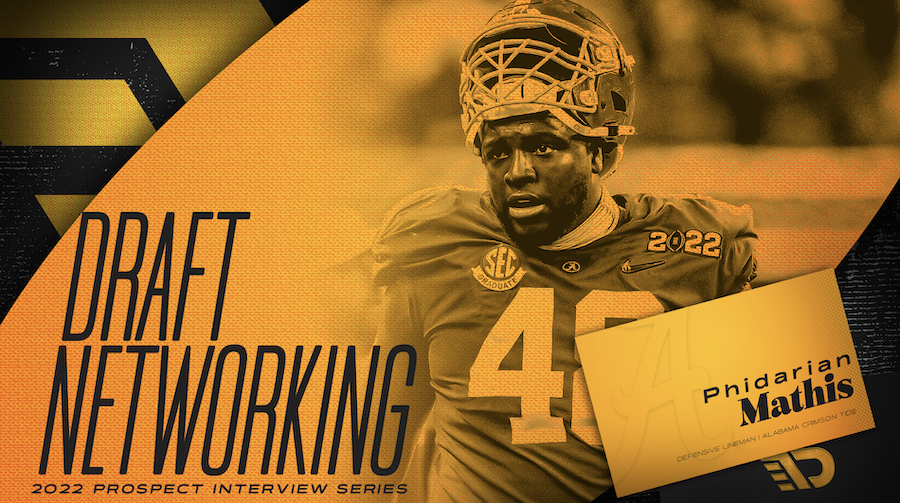 The 2022 NFL Draft features few versatile and disruptive interior defensive line weapons as exciting and consistent as Alabama’s Phidarian Mathis. Mathis took a huge step forward as a senior by recording career-highs in every statistical category while finally playing himself into the forefront of the Crimson Tide’s defensive line. Alabama lined up Mathis in multiple alignments in their front, and Mathis delivered consistent results every time.

Mathis recently spoke exclusively with The Draft Network regarding his rise to prominence at Alabama, why he enjoyed the most fruitful campaign of his collegiate career in 2021, what it means to play for coach Nick Saban, his experience and performance at the NFL Scouting combine, and so much more.

PM: I played freely in 2021. I didn’t have to sit behind so many guys this past season. You have to wait your turn at Alabama. We’ve had some extremely deep and consistent defensive linemen throughout my time at Alabama. I’ve played next to, and behind so many high-level football players and draft picks.

It was my time to shine and I stepped up to the plate. I willingly took on a leadership role in our locker room. The defensive linemen that were playing behind me, I wanted to show those guys the way forward. I challenged myself before the season. I set goals that I wanted to achieve. That was the biggest thing for me going into the season. I wanted to achieve those goals. I believe I did that.

JM: You touched on leadership. Alabama named you a permanent team captain ahead of the season. That’s a massive honor at a program such as Alabama. How did you respond to that?

PM: It was shocking at first. We had a locker room that was full of leaders. For my teammates to choose me to be one of their leaders, man, that was the ultimate feeling right there. I’ll forever be thankful for the opportunity they gave me. A lot of hard work and dedication went into that. I sacrificed a lot. I put a lot on the line to make that happen. I was always there for the guys. I stepped up when it was time for me to step up. I’m very thankful for the opportunity.

JM: Your teammates think the world of you. What’s it like playing for coach Nick Saban? You’re the prototypical defensive linemen in coach Saban’s eyes.

PM: Playing for coach Saban means you’re going to grow a lot both as a player and as a human being. From being a freshman to a senior, I got to live through the coach Saban experience. I grew a lot. I saw a lot in my five years. I’ve seen every type of coach Saban (laughs). I’ve seen him get a little soft, and I’ve seen him lose his temper with us (laughs). I love coach Saban. He just wants the best for his players at the end of the day. He wants to see us succeed. He’s going to get the best out of you no matter what.

JM: We love hearing that. You recently participated in the NFL Scouting Combine. What was that experience like, and how do you feel you showcased yourself in front of all 32 teams?

PM: That was a once-in-a-lifetime opportunity for me. A lot of guys aren’t blessed enough to receive that invite. I’m forever thankful for that. When it came time to perform, I was thrilled with my overall performance. I think I put on a great showcase for the teams in attendance. I know I left it all out there on the field. I can’t wait to build upon that performance and show them even more positive developments at my Pro Day.

JM: Which teams did you meet with formally, and do you have any virtual visits, or in-person top-30 visits coming up?

JM: There’s a lot of interest in you and it’s easy to see why. When we turn the tape on, we see a versatile defensive lineman that can line up in multiple different alignments along a defensive front. How did you develop that ability?

PM: Patience is a virtue. That’s first and foremost. I had to stay patient throughout my tenure at Alabama. Patience was always the biggest key for me. I had to perfect my craft. I waited for my time to shine. When it arrived, I was ready. The biggest thing for me was putting the team first.

It’s always been about the team for me. Wherever coach Saban wanted me to play, I didn’t mind playing there. If that’s what’s gonna help the team, I’ll play there. I just wanted to be a part of the team at the end of the day. That was the biggest thing for me throughout my entire tenure at Alabama.

JM: You did that at the highest level. Do you see yourself playing the nose or five-technique at the next level? It feels like that’s where you spent the majority of your time.

PM: Like I said earlier, I’m a team-first player. That comes before anything. I’m willing to play wherever the coach wants me to play. I developed that mentality through confidence and experience. I’ve done it before and I can do it again. I’m familiar and experienced with essentially all of the positions across a defensive line and I don’t mind playing any of them. I welcome the challenge, I welcome the opportunity. I have that confidence in myself. I can play anywhere.

JM: I want to talk about your pass rush arsenal. Some people may misjudge you as a run-stopping early-down type of player, but that doesn’t do your game justice and 9.0 sacks in 2021 proves that. How do you get after the quarterback?

PM: I do a lot of film study. I study my upcoming opponent all week long. I go into every game with a clear and concise plan in mind. It’s all about my plan of attack at the end of the day. I go into every game with a different plan. I break down my opponent to the point where I know I’m going to catch him slipping at some point in the game (laughs). I work hard all week long in order to ensure that happens. You get what you put in.

JM: I love that. What would you consider your go-to move as a pass rusher?

PM: I have a lot of go-to moves. I have very long arms so I love using the long-arm and I can work a counter off of that.

JM: You’re also a technician against the run, there’s no denying that. You’re extremely physical. Talk to me about possessing the mentality of a defender that wants to stuff the run.

PM: That’s most definitely one of our biggest keys at Alabama. That’s the first day of work when you get to Alabama (laughs). We’re always going to focus on stopping the run. We’re going to shut down the run first and foremost. Personally, I was always taught to stuff the run before rushing the passer. Stopping the run is something we’ve always been taught at Alabama. Every defensive lineman will tell you the same. It helped me improve a lot throughout the course of five seasons. I’ve always been a good run stopper. I’m just trying to get even better.

JM: Coach Saban is going to stop the run first and foremost and having players such as yourself helps him do it. I’ve really appreciated your time today. What kind of impact is Phidarian Mathis going to make at the next level?

PM: When a team drafts Phil Mathis, they’re going to get a great leader. I’m a disciplined player that goes about things the right way. Playing at Alabama for five years means I’m battle-tested. I’ve been through it all. I’ve played in every high-pressure situation you can imagine. I’m a team player. I’m ready to come to work. I’m ready to be a part of something special at the next level.