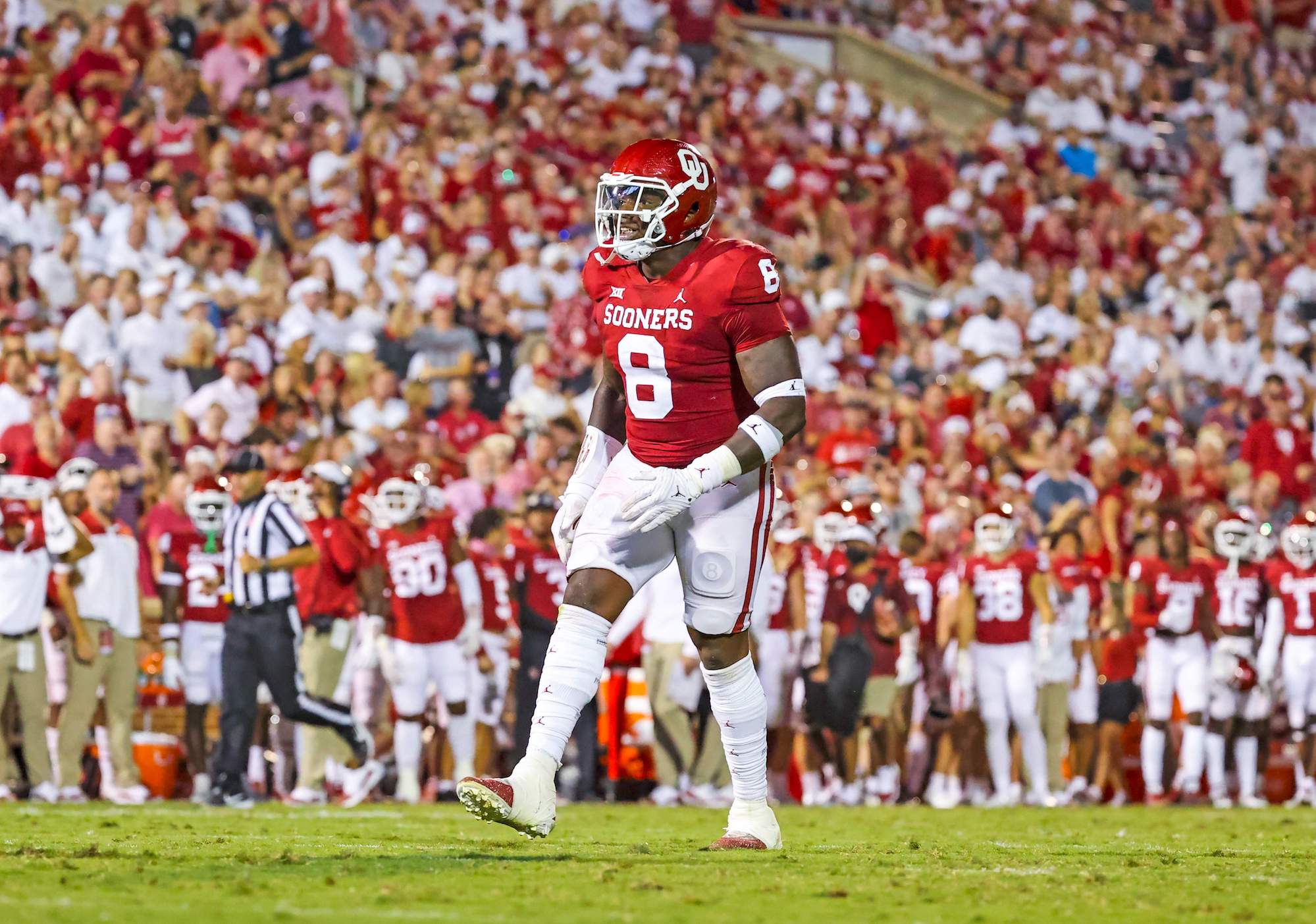 Folks, Perrion Winfrey is a DUDE. While it’s become an annual trend for a guy to take over Mobile year in and year out—we saw it last year with Wisconsin-Whitewater interior offensive lineman Quinn Meinerz—Winfrey has been that guy through two days of live work. The headlining athlete among the five Sooners that made the trip south to Mobile, Winfrey has been nearly unblockable through the first two sessions of the week. While many have labeled Winfrey as a potential late-day-two talent with boatloads of room for his stock to grow, when lined up in positions that best fit his skill set so far this week, Winfrey and Florida State’s Jermaine Johnson have evolved into the two most dominant defensive line threats the Senior Bowl has to offer. A primary two-gap defender at Oklahoma where Winfrey was asked to take on double teams and plug running lanes, in Mobile, Winfrey has worked primarily as a 3-tech defensive lineman shaded to the outside shoulder of the guard—and man has he impressed. A stoutly-built prospect whose thick lower half presents an immovable object for opposing linemen to attempt to push through, as good as his anchoring ability is, where Winfrey has popped the most so far this week is his ability in 1-on-1 matchups to burst off the snap, get “skinny” between blockers, and wreak havoc in the National Team’s offensive backfield on seemingly every live rep. In what is considered an awfully deep edge class, where depth and immediate impact-talent lacks, however, is within the interior. Although the names of Jordan Davis (No. 14 on TDN100) and DeMarvin Leal (No. 16) headline the class as the only interior threats within our top 45 players, for Winfrey, our No. 62-ranked prospect, if he’s able to continue his dominant play in practice and into Saturday’s game, there’s no true ceiling on his stock. As offenses at the next level continue to deploy smaller and quicker weapons on the perimeter, while the need for beef hasn’t become lost in the shuffle in even or odd fronts, the addition of a versatile defender like Winfrey, who can slide up and down the line—as he’s done in Mobile at times—could present a defensive coordinator with a chess piece that is able to showcase his agility from tackle to tackle in the run game while also providing a consistent pass rush threat at the nucleus of a defensive line. What’s been so doggone impressive from the former Oklahoma standout is who he’s worked against. One of the premier talents along the front five in the senior class, Winfrey against Boston College’s Zion Johnson has become a must-watch event during the one-on-one period. And while Johnson in his own right has risen his draft stock substantially with two consecutive dominant days, he didn't stand a chance against Winfrey on Tuesday—for that alone, it’s placed a massive spotlight on the former Sooners’ game and just how much more his skill set could truly evolve as a first-year talent in the league this fall. A fluid, ongoing process where daily outlandish player takes accompany each practice session, what Winfrey has been able to do thus far in Mobile hasn’t been a fluke. A defender with legit three-down capability who’s shown EVERYTHING and more that scouts drool over when jigsawing the core of a defensive line, the only way to go is up for one of the Senior Bowl’s most impactful prospects through two practice sessions.