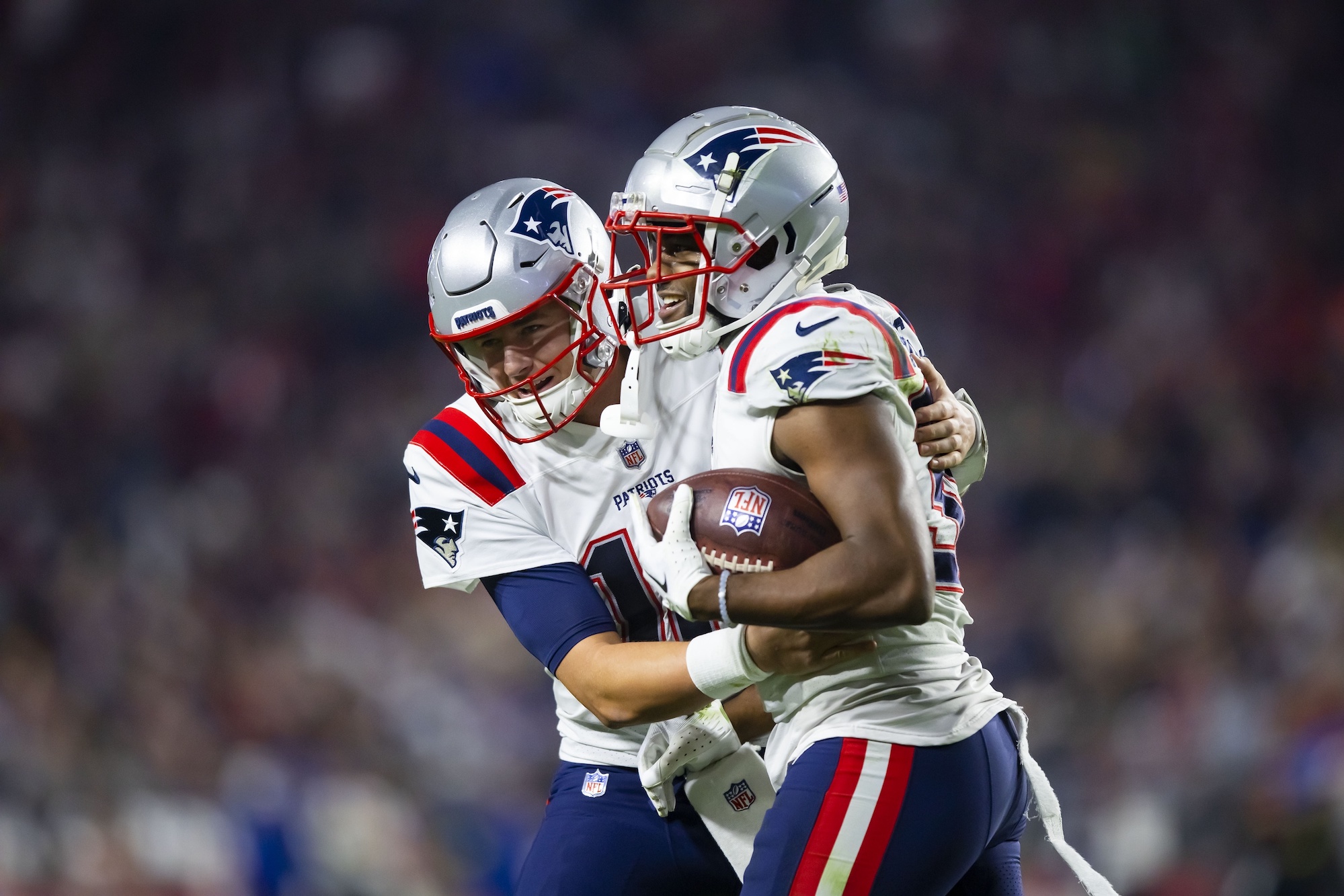 Can Rookie RBs Give Patriots’ Backfield A Boost?

New England Patriots rookie running backs Pierre Strong and Kevin Harris may receive an opportunity to make an impact on the offense. Regular starter Rhamondre Stevenson suffered an ankle injury in Monday’s win over the Arizona Cardinals. Stevenson did not practice on Wednesday. Damien Harris has also missed two consecutive contests with an ongoing thigh injury. Strong and Kevin Harris are capable of stepping up if needed.

Based on their workloads against the Cardinals, it’s plausible that Strong and Harris could form a timeshare against the Las Vegas Raiders in Week 15. Harris led the Patriots in carries, turning eight rushing attempts into 26 yards and a touchdown. Harris’ 3.3 yards per carry was rather pedestrian, but Harris did reach the end zone and is more of a natural between-the-tackles runner at approximately 5-foot-10, 221 pounds.

It was Strong, not Harris, who took full advantage of his opportunity, however. The No. 127 overall selection in the 2022 NFL Draft, the explosive Strong accumulated 70 rushing yards and a touchdown on five rushing attempts. Strong’s 44-yard gain against the Cardinals highlighted his ability to explode through available rushing lanes. Strong’s 4.37 speed (fastest time among all ball carriers at the NFL Scouting Combine) was on full display against an overmatched Cardinals defense.

A dual-threat weapon, Strong added two receptions for 20 receiving yards. Harris wasn’t targeted by quarterback Mac Jones. Head coach Bill Belichick adjusted on the fly to his hampered running back room. Harris out-snapped Strong 29-19. Harris accounted for 49% of New England’s offensive snaps while Strong was limited to 32%. Strong’s showing certainly gained him favor, however, and we’d expect those splits to approach 50-50 should their services be required versus the Raiders.

There’s a reason the Patriots doubled down at the position by drafting both Harris and Strong. They possess different skill sets. Strong is better utilized in space while stretching opposing defenses thin. Harris is a hard-nosed runner. Should the Patriots be forced to lean on their first-year tandem moving forward, Harris could command short-yardage and early-down work with Strong supplanting him on third down and via obvious passing situations.

It’s a heck of a showcase for the Patriots moving forward. Damien Harris is set to reach unrestricted free agency in the offseason and isn’t expected back in Foxboro. Drafting both Kevin Harris and Strong was the writing on the wall for Damien Harris’ non-existent future as a Patriot. There’s an excellent chance that Strong and Harris enter the 2023 campaign as Stevenson’s primary backups. Their current showings could help determine which back gains the upper hand heading into next season’s OTAs and training camp.

Harris gained 22 yards after contact and averaged 2.75 yards after contact per attempt versus Arizona, via Pro Football Focus. Harris forced three missed tackles and accounted for one explosive (10-plus yards) run. The Patriots also believe in Harris’ ability to handle multiple approaches. Four of Harris’ rushing attempts were of the gap-scheme variety, with three being zone-based concepts, per PFF. Strong wasn’t quite as elusive, interestingly enough given his standout totals. Strong forced two missed tackles and gained 13 yards after initial contact.

Strong and Harris combined for 116 total yards and two touchdowns in Monday’s victory over the Cardinals. The 7-6 Patriots currently possess the seventh and final seed in the AFC’s cluttered wild-card race as a result. Relying on a pair of first-year running backs would be a risky proposition for most postseason contenders, but Strong and Harris proved the Patriots’ rushing attack may not miss a beat should Stevenson and Harris remain sidelined.