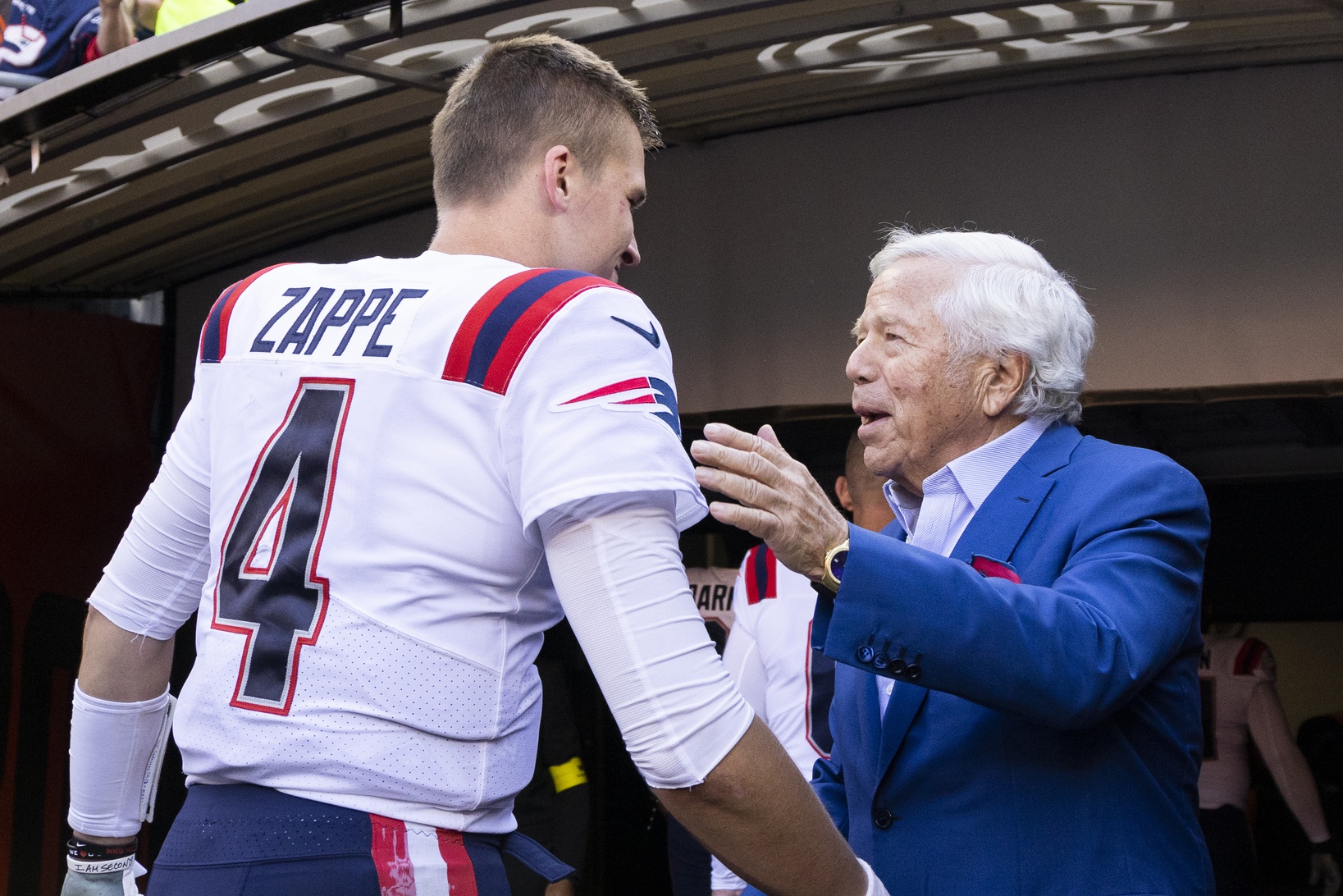 Do Patriots Officially Have A QB Controversy?

New England Patriots rookie quarterback Bailey Zappe was excellent in Sunday’s dominant 38-15 victory over the Cleveland Browns. Zappe completed 24-of-34 passing attempts for 309 yards and two touchdowns. Could a shocking quarterback controversy be brewing in New England? The situation is worth monitoring going forward.

The Patriots aren’t winning in spite of Zappe. They’re winning with Zappe. On Sunday, Zappe became the first rookie quarterback in the Super Bowl era to win and post a 100-plus passer rating in each of his first two starts. He is leading the Patriots to eye-popping victories. Starting quarterback Mac Jones may be in danger of forfeiting the job as a result.

The Patriots are 2-1 in the three contests that Zappe has played extensively. They’re averaging 30.3 points and 345 total yards of offense per showing under Zappe. He had just four incompletions in a 29-0 victory over the Detroit Lions in Week 5. Zappe has flashed clear progress on a weekly basis as the Patriots have gotten better each week with the former Western Kentucky product under center. These numbers are considerably better than what their offense was achieving with Jones at the helm.

In three games with Jones as the starter, the Patriots managed just 16.6 points per game and went 1-2. Zappe’s Patriots have scored nearly two touchdowns more per game (13.7 points) than Jones’ Patriots. Jones’ Patriots are averaging approximately 20 more total yards of offense per contest (364.6), but they didn’t convert those opportunities into points with regularity, making the yardage a moot point.

Jones has also thrown just two touchdowns versus five interceptions. In a tightly-contested Week 3 defeat to the Baltimore Ravens, Jones threw three interceptions and zero touchdowns. Jones wasn’t playing an effective brand of football prior to his injury.

Zappe made his NFL debut when veteran signal-caller Brian Hoyer suffered an injury against the Green Bay Packers in Week 4. Zappe entered the contest unexpectedly and went toe-to-toe with Aaron Rodgers and the Packers. The Patriots suffered an overtime loss, but Zappe hasn’t looked back ever since.

The No. 137 overall selection in the 2022 NFL Draft, Zappe has completed 51-of-70 passing attempts for 596 yards on the season. His completion percentage of 72.9% is excellent and efficient. Zappe has thrown four touchdowns and just one interception. Zappe has been decisive and accurate. His efforts have catapulted the Patriots to a 3-3 record and back into the postseason race in a jumbled AFC playoff picture.

Furthermore, a reported disagreement between Jones and the Patriots regarding how to treat his high-ankle sprain injury could be placing distance between the two sides. Jones allegedly preferred to go through a rehabilitation process, which took longer to heal but avoided surgery. The Patriots reportedly preferred surgery, which would have led to a quicker return to play. The rift may grant Zappe a longer leash.

Jones’ status as a first-round selection (No. 15 overall)  in the 2021 NFL Draft may be his saving grace. Will the Patriots feel pressured to remain committed to Jones? The answer will soon reveal itself, and the impending decision looms large.

The Patriots can’t avoid the quarterback controversy that remains ongoing. Zappe is playing excellent football and deserves to remain the starter for as long as his current form holds. The situation is tricky given the premium first-round investment made into Jones, but Zappe may be playing himself into the starting role.