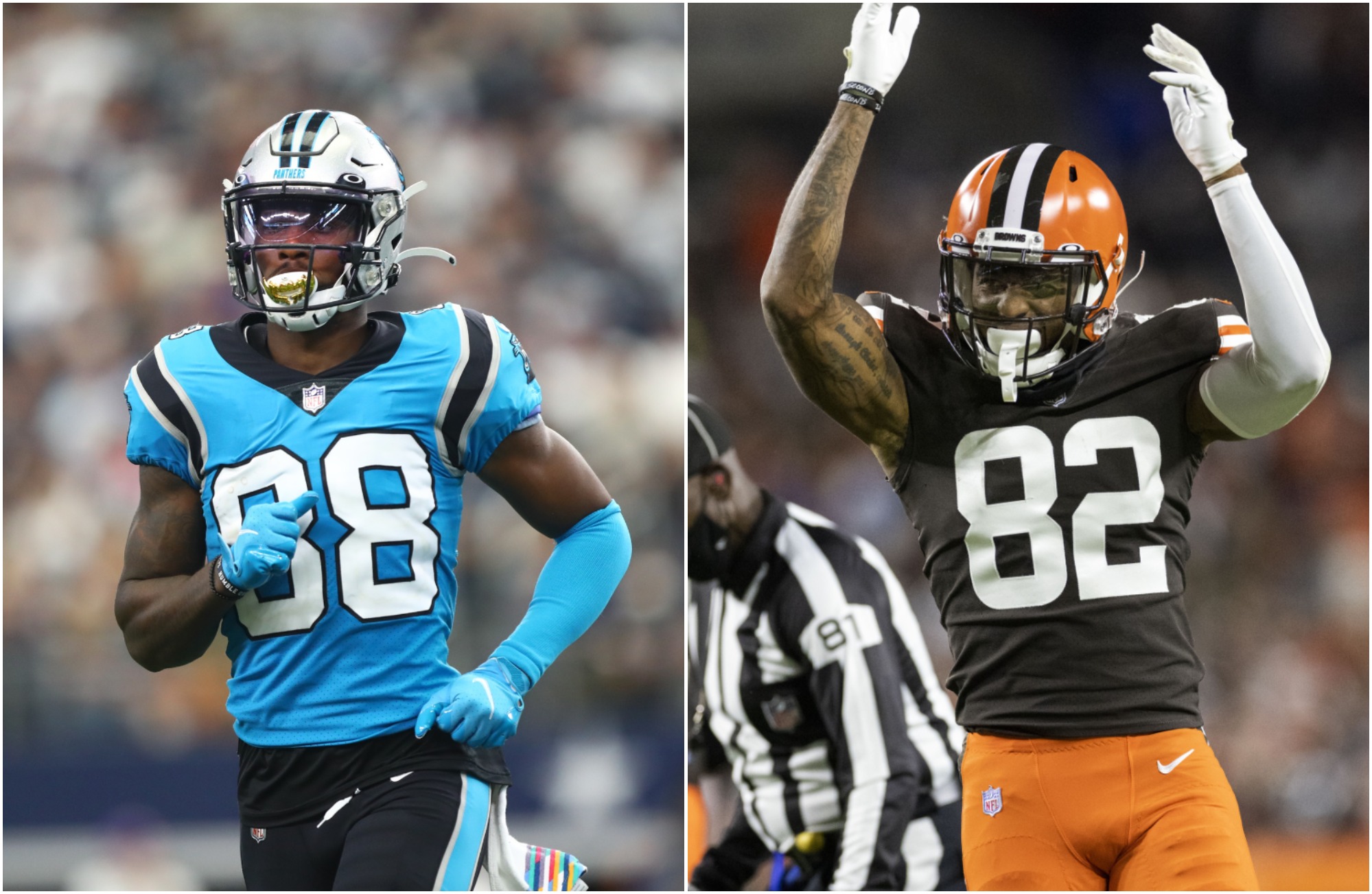 Who Will Be Panthers’ Starting Slot WR?

With D.J. Moore and Robby Anderson in place, the battle for the slot in Carolina has become a storyline to keep an eye on as we enter the summer. On a Panthers roster littered with youth-infused talent on offense, while the quarterback position has, and will, dominate camp notes as we approach the regular season, the dogfight for snaps between 2021 second-rounder Terrace Marshall Jr. and newly signed pass-catcher Rashard Higgins is a positional skirmish to follow over the next few months.

Although the Panthers’ offense fails to match up against the league’s elite, the talent available for whomever under center this fall should provide a banner of optimism. It remains to be seen just how long Head Coach Matt Rhule’s leash will be extended, as Carolina’s front office—as they should—remains on pins and needles in year three of the Rhule experiment that has produced just 10 wins combined the last two seasons.

However, with eyes up toward the horizon as the 2022 campaign closes in, both Higgins and Marshall remain impact athletes in the passing game who will remain key in the overall success of the aerial game—but who comes out on top?

An early-day-two pick last spring, I’ll be the first to say Marshall was one of the rookies I was most excited to watch last fall. A 6-foot-3 blazer on the edge, Marshall took over WR1 reps for Ed Orgeron’s Ja’Marr Chase-less offense for seven games at LSU in 2020—and boy did he impress. Marshall totaled 48 receptions for 731 yards with six touchdowns, highlighted by a dominating performance against the Missouri Tigers in which he torched the secondary to the tune of 235 yards and three touchdowns.

He isn’t just a vertical threat, however, as he worked seamlessly in the intermediate portions of the Tigers’ offense behind Justin Jefferson and Chase during his tenure in Baton Rouge. It was his way to earn snaps initially, Marshall said, who understood his role as an underclassman wasn’t to dominate or field a featured role within the offense. His role was carved out of hard work and dedication to his craft that ultimately made him into the receiver he strives to be in the early stages of his NFL career as he competes with Carolina’s aforementioned talent for targets.

“I can play anywhere on the field,” Marshall said following LSU’s Pro Day last year. “I use my size to my advantage, my speed is unique, and I’m able to work DBs in and out of my routes.”

Looked upon as a backend first-round talent during his draft cycle, Marshall’s skill set, although without a WR1 designation throughout his time in college, presented one of the easier evaluations of the entire class. Among second-tier wideouts, he presented ideal size, ball skills, experience, and fluidity as a route-runner. Pairing his frame, eye-popping tape, and elite raw measurables, it wasn’t hard to see why he enjoyed immediate success in his first slate of preseason games last fall.
Although the regular season wasn’t as kind, as Marshall appeared in 13 games but totaled just 30 targets that accumulated 138 yards on 17 catches, the slot spot—for me—looks like his to lose with a full year of NFL experience under his belt and foundational explosiveness the Panthers have yet to tap into.

An uber-experienced wideout, if Carolina eyes another young veteran within their offensive core, my case for Marshall could be simply thrown out the window. With Moore, Anderson, and do-it-all ball-carrier Christian McCaffrey all touting more than 3,500 offensive snaps in their careers thus far, Higgins, who is still just 27, could provide the final puzzle piece just based on prior experience.

With six NFL campaigns spent in Cleveland now in his rearview mirror, his 2020 season saw him enjoy a career year totaling 599 yards on 37 receptions. Despite the drama surrounding Odell Beckham Jr that inherently opened up targets to be had, Higgins finished fifth in receiving for the Browns (275 yards) and never worked into substantial snaps after working in on just 52% of the offensive workload.

A primary possession receiver who offers sure hands over the shallow areas of the offense, Higgins fails to compare to Marshall after the catch and in the air, but with Moore and Anderson primed to represent the first two reads in progressions under center, every offense needs a Rashard Higgins, and it shouldn’t surprise if he works into targets—no matter his snap count—early this season.

Although the Panthers remain a franchise teetering on the brink of a rebuild and remaining competitive in the NFC South, the battle between Marshall and Higgins is a good problem to have if you’re Rhule. Only time will tell who ends up on top come Week 1 against Higgins’ former ballclub in the Browns, but ‘iron sharpens iron,’ and it presents just one of many positional battles across football we’ll dive into over the course of the next few months.