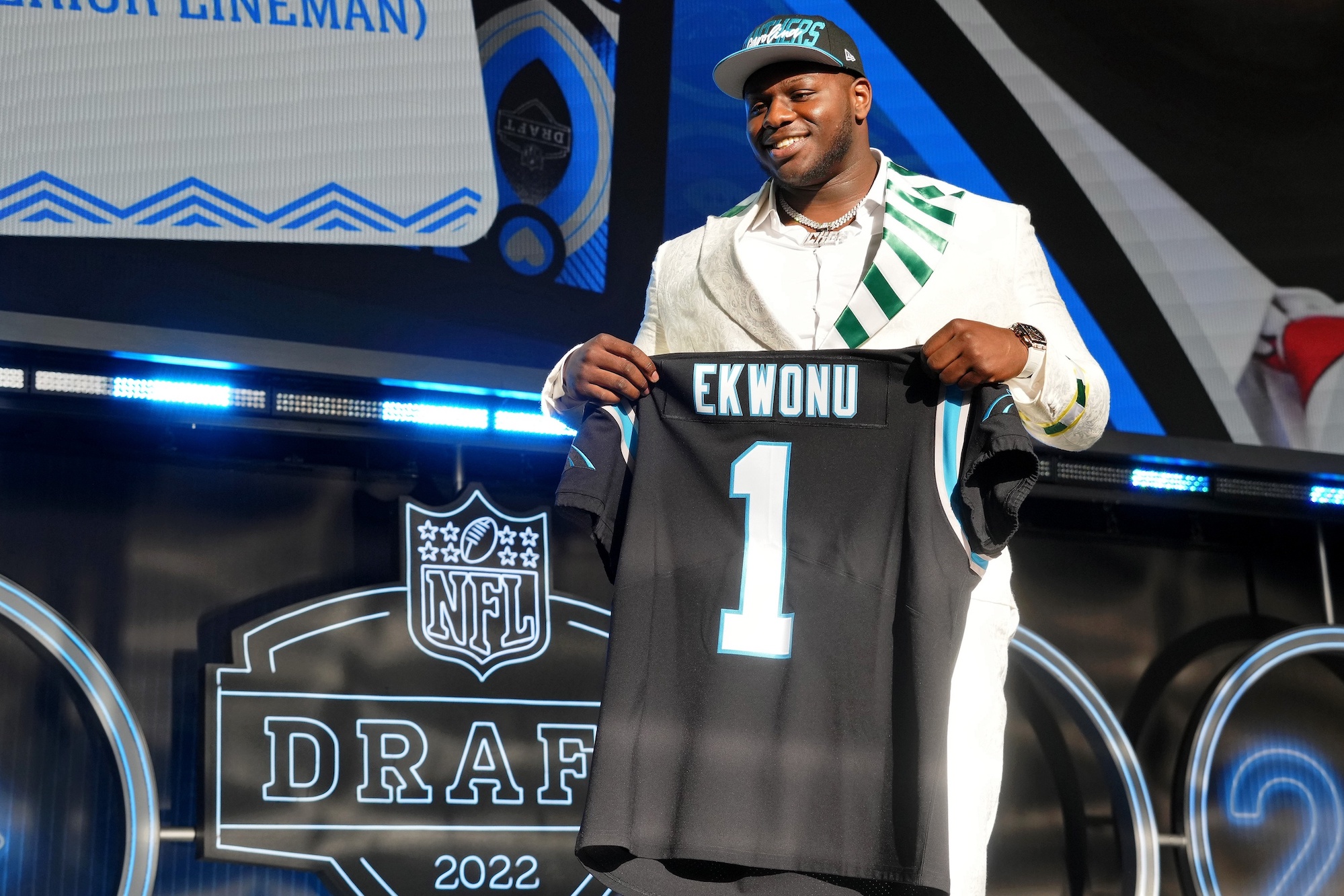 The Carolina Panthers entered the 2022 NFL Draft with a critical need at quarterback and left tackle while owning the No. 6 overall pick and none in the second or third round, creating a challenging situation to come away with answers at both spots for general manager Scott Fiterrer and head coach Matt Rhule. How did things unfold for Carolina? Let’s examine what the Panthers accomplished with these Panthers 2022 draft grades.

The Panthers have been looking for an answer since left tackle Jordan Gross retired after the 2013 season. Now with Ekwonu in the fray, the search is over.

My No. 2 overall prospect in this class, Ekwonu is the total package. He is a dominant and ferocious run blocker that has the length and quickness to excel in pass protection. He has great range as a blocker and has the intangibles necessary to be a core pillar of the franchise and an influential leader in the locker room. I never imagined Carolina would have its pick of the offensive tackles at No. 6 but the corners and edge rushers filling the top five selections allowed the Panthers to land a steal in Ekwonu.

Given the Panthers’ need at quarterback, Corral is a worthwhile swing in the third round. With that said, expectations need to be in the right place. While Corral was a productive passer in the SEC with exciting flashes of creativity in the pocket and a quick release, he’s facing a notable adjustment to the next level.

Lane Kiffin’s spread, tempo offense featured its share of spacing and RPO tags with very few progression-style concepts creating quite the transition ahead for Corral. I would caution fans that are starving for a new franchise quarterback to be patient with Corral and understand his presence on the depth chart shouldn’t preclude an early investment in next year’s draft on a prospect with better tools.

Brandon Smith is arguably the most physically gifted linebacker from the 2022 class given his blend of size, length and athleticism, which is exactly what Carolina has valued on defense under Rhule. While his tape was uneven at Penn State in 2021, he found more consistency in 2020 when used more as an outside linebacker.

His frame suggests he’d be able to handle duties as a MIKE linebacker but that isn’t the case. The Panthers should prioritize Smith as a matchup defender that gets plenty of chances to play in space. Smith has a very high ceiling considering he has no physical limitations.

Carolina was the perfect team for Barno considering the Panthers have a recent history of getting production out of leaner, speedy edge rushers like Brian Burns and Haason Reddick. Featuring 34-inch arms at 6-foot-5 and 246 pounds, Barno clocked a 4.36 40 and 1.54 10-yard split at the NFL Scouting Combine. While he wasn’t always able to make an impact in college, he has an exciting toolbox to develop at the next level in a system that knows how to deploy players with his skill set.

A five-star recruit, Mays was a productive starter for both Tennessee and Georgia and has experience at all five offensive line spots. I like him best at guard where his physicality can thrive and where he won’t have to deal with speed rushers off the edge.

Mays is a powerful blocker with a nasty demeanor that has the makeup of an eventual starter. He needs to become a bit more controlled and be more willing to sit on his hips and not rely on momentum as a blocker to maximize his opportunity at the next level. In year one, Mays should be a quality reserve with the upside to challenge for a starting role in year two or three.

Barnes is the type of swing worth taking in the seventh round and I’m surprised that he didn’t get picked a few rounds earlier simply because of his 4.2 speed. A high school track star, Barnes was recruited by Rhule at Baylor and developed into a starter in 2020 and 2021. He has the speed to match up with and carry any receiver in the league down the field. That said, he does need to develop his coverage instincts and route anticipation skills. He also wasn’t used much on special teams or as a slot player—things that may be asked of him in the NFL, especially as a depth player.

The Panthers addressed critical needs with good value despite not owning any day two selections entering the draft. I came away impressed with the latest draft haul from Rhule and Fitterer. From a talent perspective, Carolina is good enough to compete. Now it comes down to finding consistency at quarterback and Rhule proving he can coach a winner in the NFL.