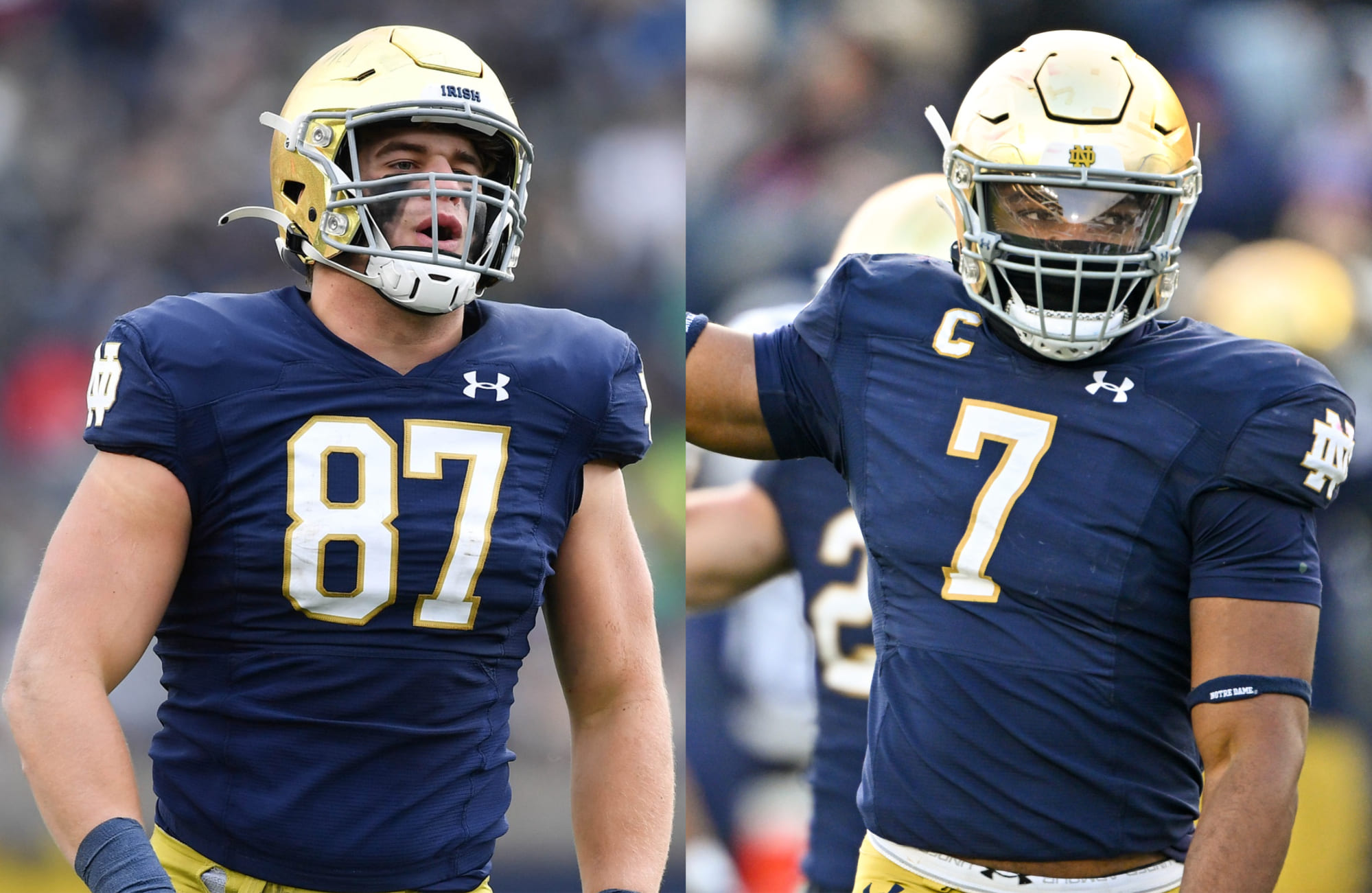 It happens every year with a highly intriguing golden-domer from Notre Dame. We often make it tough on ourselves when laying a finger on their exact projection moving to Sundays. While predicting the future is an inexact science, it’s what we attempt to do every day. Idealizing the translatability of skill sets often causes differentiating opinions to hold more weight when it comes to making a decision. From Jeremiah Owusu-Koromoah in 2021 to Kyle Hamilton last spring, there are always naysayers when it comes to potential day-one selections with all the clubs in the bag to become high-level talents in the NFL.

While medicals saw Owusu-Koramoah slip to day two of the draft after an overwhelmingly impressive career in South Bend, Hamilton’s evaluation showcased a player as dynamic a defensive stalwart to enter the draft in years, but the industry stuck to dust in the air as April approached.

The premier prospect available in the 2022 cycle, while it was expected that we wouldn’t see his name come off the board first, he possessed an otherworldly blend of athleticism, football IQ, and versatility that no other athlete in the country had. A one-of-one talent with the necessary skill set to completely revamp a defensive unit, at 6-foot-4 and a tick over 220 pounds, Hamilton didn’t leave a single box unchecked as a defender that can roam the ceiling, creep down at the second level, and wasn’t afraid to stick his nose in as a downhill run defender near the LOS. An alien at times where his playmaking ability would allow him to make plays at either sideline on any given snap, he was taken by the Ravens on night one with the 14th overall pick after an exhaustive few weeks leading up to draft night where doubts toward his game constantly overshadowed his true All-Pro potential.

In 2023, there are two talents whose evaluations remain up in the air as we approach Christmas time. For Notre Dame tight end Michael Mayer and edge talent Isaiah Foskey, while their floors as prospects remain as high as any in the class, scheme specificity, athletic intangibles, and performance ceiling are all legitimate questions for a team to persuade themselves in taking either guy on day one of the 2023 NFL Draft.

For Mayer, the top draft-eligible tight end in the nation, we’ll start with his game as a big-bodied talent who remains in line to be the first tight end off the board. A physical prospect who will present matchup nightmares from the onset of his career, his top-end burst has thrown a wrench into just how dynamic a weapon he’ll be at the next level.

Not an elite pass-catcher when asked to stretch the seam or in snapping off routes by any means, at 265 pounds, he will make his living a lot like how the likes of Todd Heap, Zach Miller, and Jason Witten did—over the middle of the field with sure hands and ‘big-boying’ smaller defenders in tight confines. And in the run game, he’ll have no issue moving defensive ends and blowing linebackers off the ball.

His floor remains lofty because what you see is what you get, but in a day in age where the tight end spot has become the chess piece to push teams over the top offensively, teams will be forced to fight an internal battle if they do indeed desire a superior athlete who they can coach up as a blocker.

For Foskey, it really just comes down to turning on the tape. The all-time sack leader in Notre Dame’s prestigious history, concerns remain about where exactly he’ll find his niche along the defensive front at the next level, but his effort, power, and explosiveness should allow him to wreak havoc from the start of his career. A guy that also isn’t afraid to stick his face in the mud on special teams, he leads by example and will be an immediate boost to a locker room in need of a voice to rally around.

Where caution arises is his ability to threaten the edge against higher-level talents, and in turn, how that could limit his effectiveness at the NFL level. At 260 pounds, he needs improvement in deconstructing blocks that will allow him to wrangle down ball carriers at the line of scrimmage, but those are all expected nuances to sand down as rookies make their way into the NFL. He isn’t scheme-specific, either, as his skill set should allow him to succeed within a defense that deploys both even (four-man) or odd (three-man) fronts, increasing his value.

Two prospects that won’t surprise anyone if they hear their names announced by the commissioner on opening night, opinions will once again run wild on Notre Dame’s two headliners this spring. While it’s become a yearly occurrence to second-guess athletes from the walls of South Bend, Mayer and Foskey will be welcomed additions to wherever they land within the top 50.