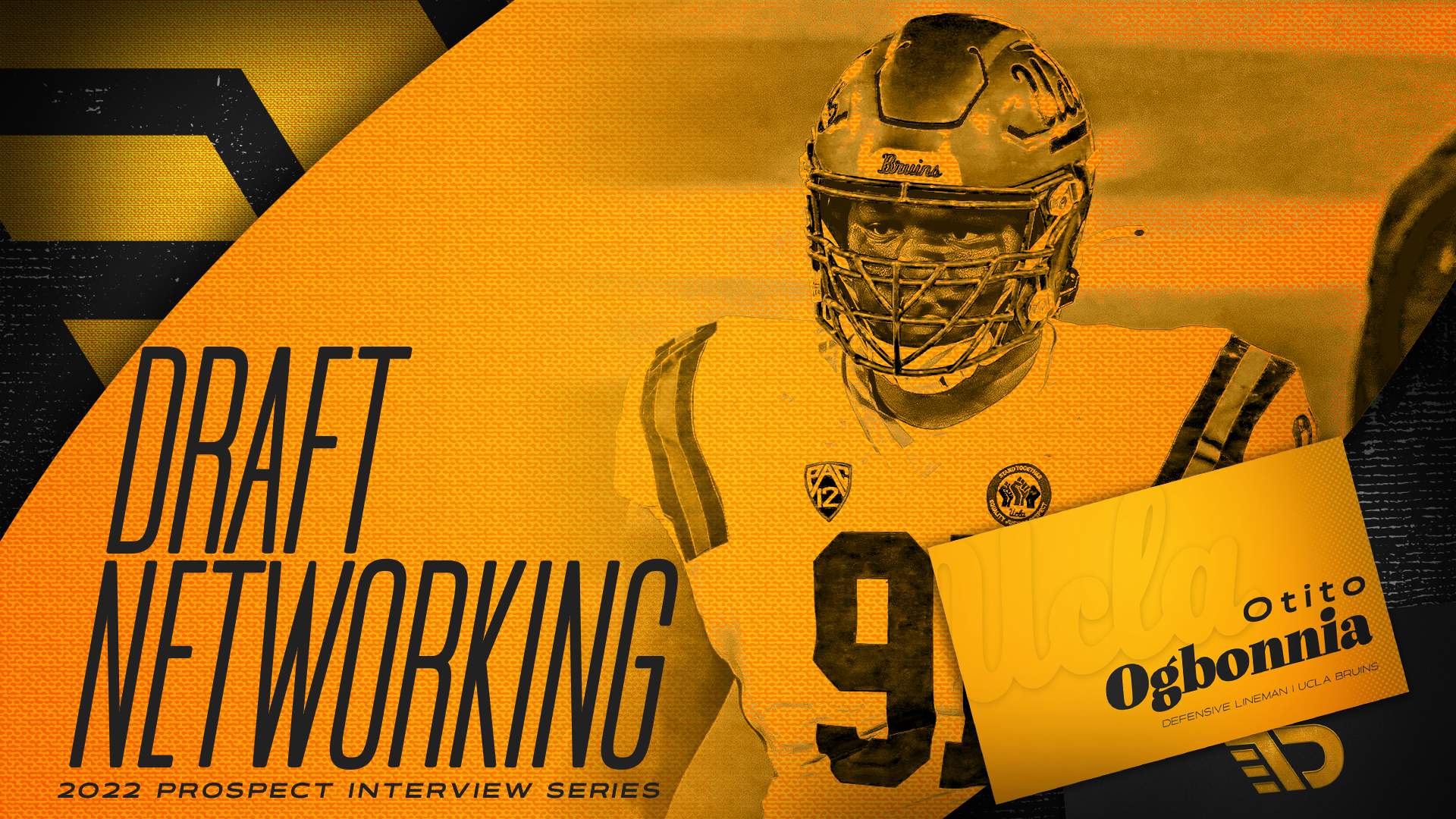 Every year, an underrated prospect takes advantage of the pre-draft all-star circuit. At the 2022 Senior Bowl, UCLA defensive lineman Otito Ogbonnia was that type of player.

A sheer powerful force to be reckoned with, Ogbonnia showcased his ability to both rush the passer and stuff the run in Mobile. Ogbonnia played every position across the defensive line throughout an impressive four-year career with the Bruins while recording 76 total tackles, 8.5 tackles for loss, and 4.5 sacks.

Ogbonnia recently spoke exclusively with the Draft Network regarding his experience in Mobile and why he believes he improved his draft stock, his versatile ability to play every position, playing for coach Chip Kelly, why being a champion shot putter helped mold him into a better and more productive football player, and so much more.

JM: You were born and raised in Houston and went to high school locally in Texas before deciding to attend UCLA. You found yourself a long way from home on the west coast. What was it like going from Texas to L.A.?

OO: It was definitely a bit of a culture shock at first. It’s a different type of culture and people in Los Angeles. It’s a different environment in general, especially when you take into account that UCLA is located in Westwood.

It was definitely an eye-opening experience for me in the most positive way imaginable. It was just different. It forced me to get outside of my comfort zone, which is a good thing for personal growth. I definitely enjoyed some of the challenges and changes I encountered.

It was very cool. I was a little more timid to the situation and environment at first. I definitely opened up a bit more after my first and second year. Other than that, I made a smooth transition. There was definitely some culture shock involved though. California isn’t Texas.

JM: Getting out of your comfort zone and attending UCLA gave you an opportunity to play for coach Chip Kelly. What’s it like playing for coach Kelly?

OO: It was cool. Nobody really knows what he’s like until you play for him and get up close and personal with him. I was blessed to be coached by such a smart and unique leader.

He’s a pro-style coach. He runs an extremely tight ship. UCLA has been a very discipline-oriented program under his watch. I thought I fit perfectly into that type of program. I loved playing for a coach that placed such a large emphasis on both academics and football. That’s who coach Kelly is. I really appreciated that.

JM: He’s a terrific coach to learn from and play for. You recently participated in this year’s Senior Bowl. What was that experience like?

OO: That was a great experience. It was a lot of fun to test myself against other high-level prospects from all over the country. Of course, you can watch tape and measure yourself against other players that way, but it’s much cooler to get together and practice and play against one another at an event like the Senior Bowl.

I went up against a ton of top names and have a better understanding of where I stand in this draft class. It was yet another eye-opening experience for me. I learned so much in such a short period of time. It extended beyond football. I enjoyed learning about the community aspect involved and how much the Senior Bowl and football mean to the people of Mobile, Alabama. I thought that was really cool. Being from Texas and going to school in Los Angeles, I didn’t realize that.

It was such a cool experience that I very much enjoyed. It was a short week that definitely flew by. We were busy and it was a grind.

I enjoyed meeting with all 32 teams. I did a number of interviews and I took something away from each one. I learned and got better throughout the interview process. It felt like going through a job interview. You get those experiences under your belt, you learn from them and then you perform better in your next interview. I met with some teams more than once. Every team gave me a different vibe. I thought that was a cool part of the process as well.

JM: Do you feel like you improved your draft stock in Mobile?

OO: I think I definitely did. I don’t think a lot of people were too familiar with me heading into the week. I think I changed that throughout the course of the week. I think I left the Senior Bowl as a more well-known prospect. People took notice. I impressed a number of scouts out there. I feel like I achieved what I set out to achieve. I’m very satisfied with my experience.

JM: Talking about what scouts and coaches maybe took away from getting to know you better, do you feel like you’re more advanced as a pass rusher or run stopper at this point in time?

OO: I think I’m more advanced as a run-stopper at this time. Being a defensive lineman my size, (6-foot-3, 326 pounds) I’ve always been taught to stop the run first. You get rewarded with opportunities to rush the passer by stuffing the run on first and second down.

I spent a decent amount of time at UCLA trying to work on the technical aspects of being a run defender. Toward the latter half of my career, I transitioned toward becoming a better pass rusher in my junior and senior seasons, and I had a couple of sacks this past season. I showcased growth in that area of my game throughout the season and at the Senior Bowl as well.

JM: And we saw that improvement on tape. Do you see yourself playing the nose tackle position at the next level?

OO: I honestly think I can play anywhere on the defensive line from the 0 to 5-technique. That’s exactly what I’ve done in the past. I definitely see myself playing as a nose tackle or as our 3-technique. I’ve been well-trained and coached at both positions.

JM: On that topic, how do you think the way UCLA utilized your skill set helped prepare you for the next level?

OO: We ran a number of different fronts and schemes throughout my time at UCLA. We switched our defensive system halfway through my career at UCLA. We went from a 3-4 to a 4-3. I spent my first two years two-gapping as the left defensive end or nose guard. I then transitioned to a more vertical 2i, 1-technique, and 3-technique during my last two seasons.

I think playing a number of positions and different techniques in changing systems helped prepare me. I’ve been exposed to a lot. I understand the coaching points involved with all of these positions and schematic changes. Those experiences are definitely going to help me at the next level. I’ll be ready for that system.

JM: Those experiences are extremely valuable. You have a track-and-field background and were especially successful as a champion shot putter. I find that to be extremely interesting. How did those experiences help make you a better defensive lineman?

OO: I think it helped at a number of levels. Obviously, you’re competing against other people but it’s really about practicing and perfecting your own technique. It’s very similar to football in that aspect.

From a competitive standpoint, you’re going to track meets to compete against other guys, but it’s really you vs. you. It prepares you for competition. A lot of times in the game of football as a defensive lineman, even though you’re against offensive linemen, a lot of what determines your success is what you do. It’s not necessarily about the player across from you. It’s about how you’ve practiced and prepared for the moment. That’s one of the things that helped me better focus. Competition isn’t always about who you’re going up against.

JM: Those are terrific points. I’ve really appreciated your time today. What kind of impact is Otito Ogbonnia going to make at the next level?

OO: You’re going to get an extremely productive defensive lineman that understands how to get backfield penetration. I can two-gap when need be and stuff the run. On passing downs, I can collapse the pocket, get into the backfield and make opposing quarterbacks uncomfortable. I can shed those blocks and rack up some sacks. I’m going to be a versatile, team-first player at the next level.