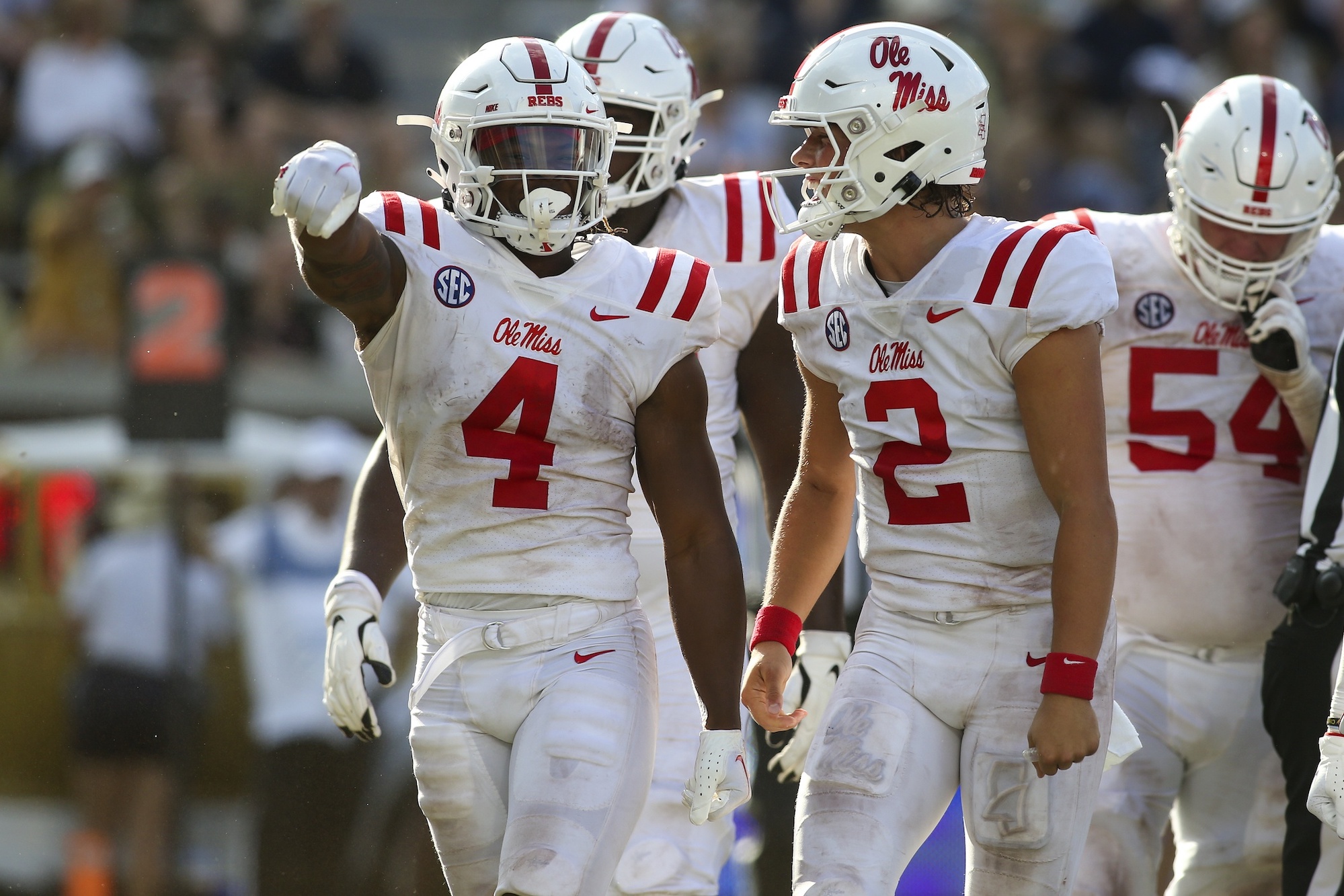 Ole Miss Offense Starting To Click On All Cylinders

A top-10-ranked program for the second consecutive season, Lane Kiffin’s Ole Miss Rebels have been firing on all cylinders a little over a month into the 2022 campaign. The nation’s 15th-ranked offense when it comes to yards per game (490.0), Kiffin’s unit heads into their showdown with Auburn touting one of the deepest offensive arsenals the country has to offer.

Led by USC transfer Jaxson Dart, the spotlight on the undefeated Rebels comes in the backfield where transfer Zach Evans and standout freshman Quinshon Judkins call home. While Evans received all the attention this offseason as a former five-star prep recruit who desired fresh scenery, it’s been Judkins who’s led the way on the ground so far this fall.

This is why Ole Miss head coach Lane Kiffin sat out in the rain all alone last year at a high school game.

He saw something no one else in the State of Alabama saw.

A game-changer running back.

A three-star prospect out of Pike Road, Alabama, Judkins went a tad overlooked during the recruiting process. While the Power Five offers were there from schools like Arkansas, Auburn, and Notre Dame—to name a few—Judkins was initially looked upon as a talent that would redshirt his freshman season, use the weight room and year on campus to his advantage, only to then ramp up football activities come 2023. But Kiffin had other ideas.

Instead, Judkins has become a dynamic force within the Ole Miss offense, one of the most explosive freshmen in the SEC, and really, one of the most productive ball carriers in the nation through six games. With 98 yards and two touchdowns against Georgia Tech and 108 on the ground and a trip to paydirt against top-25-ranked Kentucky, Judkins has rushed for multiple touchdowns in three of his last four games and right now looks to be the straw that stirs the Rebels offense.

Adjacent to him is Evans, a tier-one 2023 NFL Draft prospect with a skill set as good as anyone in the country. Big, strong, breakaway speed, from a measurables perspective he’s been on evaluators’ radars for years, but the production and consistency have yet to match his herculean physical profile. His 469 yards at a 5.9 yards per carry clip is nothing to scoff at, but more will be needed from him if Kiffin eyes an SEC title this fall.

On the outside, the Rebels have a stud in Jonathan Mingo—get to know his name. A physical 6-foot-3 target, he’s come into his own in his fourth season in Oxford. Like Evans, his consistency has been a question throughout his career, but he has all the ability to take over a football game—a nod to his 247-yard, two-touchdown performance against Vanderbilt last week. But it’s about putting it all together.

With Mingo, Evans, Judkins, tight end Michael Trigg, and Mississippi State transfer Malik Heath, the bodies are there to compete for a spot atop the SEC West in 2022. Under Kiffin, one of the most offensive-minded head coaches whose knack for evolving and tailoring his scheme consistently places his player in a position to succeed, keep a keen eye on the Rebels with matchups ahead against Auburn, LSU, and Texas A&M before hosting Alabama in mid-November.