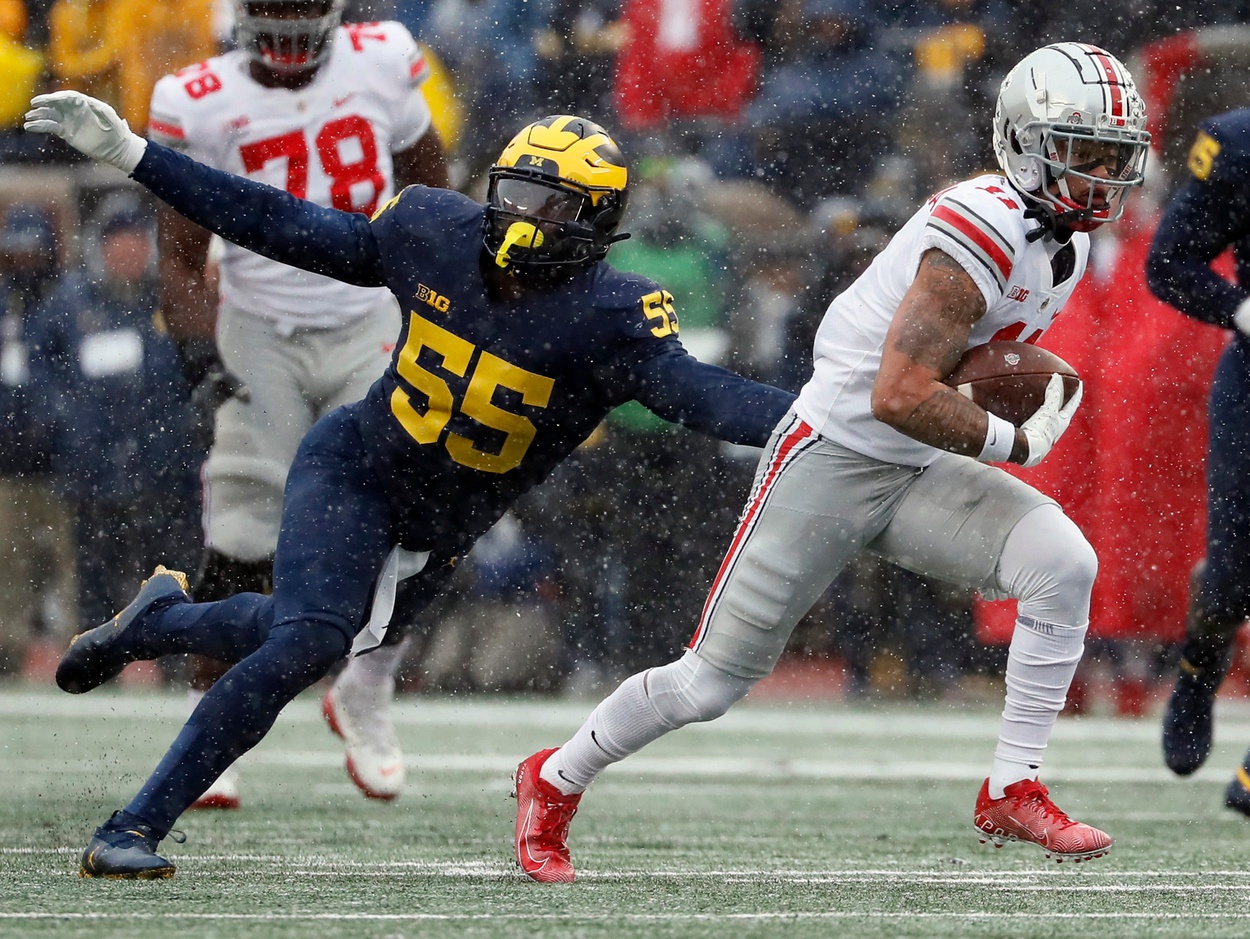 The 2021 Ohio State Buckeyes offense was the best unit in college football. No team averaged more points per game (45.7) or yards per game (561.2) than the Buckeyes en route to an 11-2 record – and it was helped by wide receiver Jaxon Smith-Njigba.

But the offensive weapon that shined the brightest was Smith-Njigba, who collected a single-season program-record 95 receptions and 1,606 yards with nine touchdowns. Smith-Njigba set a new Big Ten receiving record, topping Lee Evans who had held the record since 2001 with 1,545 yards.

Smith-Njigba became more and more productive throughout the season, closing the year with five consecutive games with at least 100 receiving yards. Over that stretch, Smith-Njigba averaged 12 receptions and 191.6 yards per game. Of course, the shining moment for Smith-Njigba came in Ohio State’s thrilling Rose Bowl win over Utah, where he hauled in 15 receptions for an all-time bowl game record 347 receiving yards and three touchdowns.

With Wilson and Olave now in the NFL, there is likely to be even more on Smith-Nijigba’s plate in 2022, despite the fact that he led Ohio State with 25 more receptions and 548 more yards than Wilson who was second on the team in both categories last season.

Smith-Njigba won’t be without help at receiver where Ohio State remains loaded. Surrounding him are talented playmakers like Marvin Harrison Jr, Julian Fleming and Emeka Egbuka among others. That said, those players are not nearly as proven as the likes of Olave and Wilson, so Smith-Njigba will likely command plenty of attention from opposing defenses. It’s fair to say that despite out-producing both Wilson and Olave, Smith-Njigba benefited from their presence in the lineup.

Let’s examine why Smith-Nijigba is such a productive weapon and is destined to become a high NFL Draft pick, while also considering components of his game that can develop to maximize his valuation in what should be another loaded crop of pass catchers available in the 2023 NFL Draft.

At its most simple form, playing receiver is about getting open and catching the football and my goodness does Smith-Njigba do that at a high level. He is an exceptional route runner where he showcases outstanding body control in his route stems and through his breaks with deceptive footwork. He does well to read leverage, make sight adjustments and run to space while making himself available for Stroud to deliver him the football. I love his football intelligence and spatial awareness.

Smith-Njigba complements that exceptional route running skill with outstanding hands and ball skills. His body control shows up at the catch point and his hands are secure. He does such a great job of establishing and maintaining leverage, while finishing at the catch point. A threat to all levels of the field, Smith-Njigba is decisive with excellent vision after the catch.

Simply put, he is a technically-refined player and everything he does on the field is smooth and natural. He makes playing the position appear easy and it’s apparent he is a well-coached and rigidly-repped player that executes his role at a high level.

WHERE HE CAN GROW

I anticipate there being two major questions when it comes to Smith-Njigba that will be used as “differentiators” when evaluators are stacking up the rising crop of receivers.

The first component is that 87 of his 95 receptions (92%) in 2021 came from the slot. While Ohio State moves him around the formation and frequently puts him in motion, there is no denying that Smith-Njigba has enjoyed and taken advantage of free releases. Therefore, his ability to win out wide is a question.

What I’m hopeful for is that Smith-Njigba has a similar arc as Wilson, who had the same question coming out of the 2020 season. A high percentage of Wilson’s production came out of the slot in 2020 before that shifted drastically in 2021, which helped Wilson become a top-10 draft selection.

The more challenging question for Smith-Njigba to answer is concerning his speed. Make no mistake about it, Smith-Njigba is a dynamic route runner with good separation quickness and an exciting vertical receiving ability. With that said, that explosive second gear is missing from his skill set.

Let me make something abundantly clear – Smith-Njigba is not a poor athlete and in fact, I think he is an above-average athlete in terms of play speed. But there are enough instances when studying Smith-Njigba where he gets caught from behind in the open field to bring his top end speed into question. He gets to his top speed rather quickly, it’s the next gear to pull away that is currently missing. His technical-refinement and football IQ are major assets to his game but when considering elite caliber receiver prospects, I can understand why more explosive receivers could be rated higher than Smith-Njigba.

I’m sure he will do everything that he can do to improve his speed and be sure that the technique in his 40-yard dash is perfected to record his best possible time. But Smith-Njigba’s athletic testing is likely to be one of the biggest discussion points surrounding him as it relates to his draft stock and rank among the receivers in the 2023 NFL Draft.