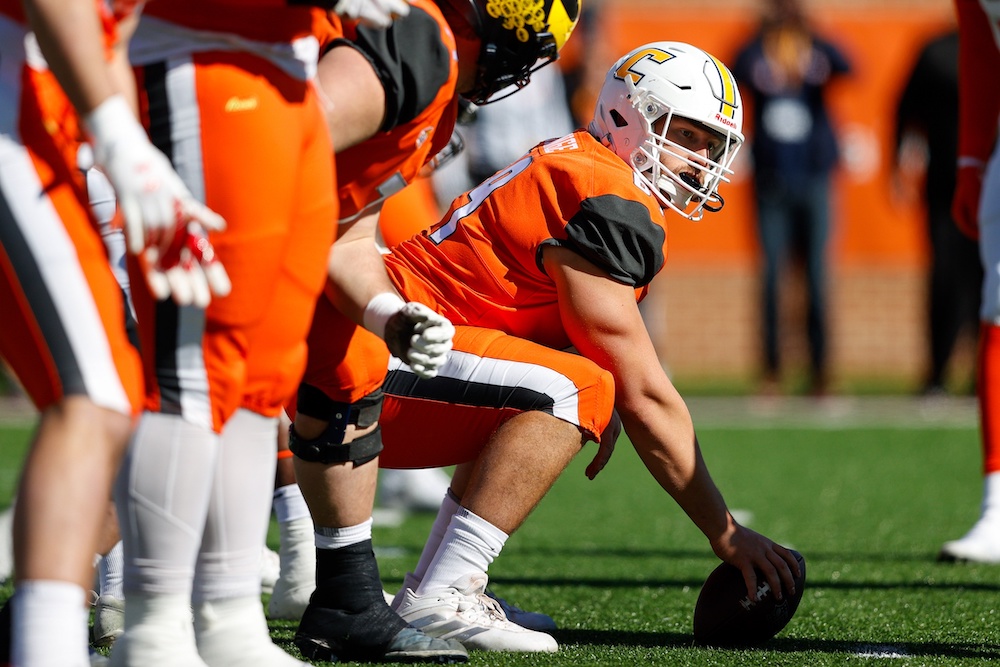 Protecting your franchise quarterback is more important than ever in today’s pass-happy league. Placing emphasis on high-level offensive play is a wise strategy for NFL offenses that plan to throw the football on a relatively consistent basis going forward given that defensive lines are becoming more athletic and dangerous with each passing season. Bookend offensive tackles often garner the attention and headlines, but the quickest way for defenses to apply pressure on opposing signal-callers is right up the middle and through the interior of the O-line. Having quick-footed, athletic and physical interior offensive linemen is of the utmost importance to counteract what interior defensive linemen are capable of nowadays.

Several interior linemen are expected to be drafted in the first round of the 2022 NFL Draft, including Iowa’s Tyler Linderbaum, Texas A&M’s Kenyon Green, and Boston College’s Zion Johnson. For teams who miss out on three premium talents, or for ones that prefer to wait until later in the draft to select interior offensive linemen, the 2022 class is loaded with valuable prospects. We’ve identified three centers and guards that could provide their future NFL franchises with immediate value.

The definition of a do-it-all linemen, Memphis’ Dylan Parham may be the most versatile offensive linemen in the 2022 NFL Draft. Parham started 11 games for the Tigers program this past season at the right guard position and didn’t allow a single sack in 545 snaps in pass protection. Parham manned the right tackle position in 2020 and played left guard in 2019. That versatility was well on display at January’s annual Senior Bowl event where Parham further showcased his jack-of-all trades abilities by spending time at center. In rather predictable fashion, Parham looked like a natural in the middle. It was yet another development that should help Parham land a strong Day 2 grade from all 32 NFL franchises. Parham also “won” the weigh-in process by clocking in at 311 pounds. It qualified as a massive victory for Parham, who was previously listed at 285.

Parham is a nasty competitor on tape that plays with an extremely aggressive mentality and approach. A powerful lower half allows the Carrollton, Georgia native to generate the desired movement in the run game. Parham is an excellent athlete for the position that ran an unbelievable 4.93 in the 40-yard dash at the NFL Scouting Combine. He has essentially checked every box throughout the grueling pre-draft process and possesses the traits necessary to quickly secure a starting job up front.

There’s some sizable sleeper potential within Tulsa’s Chris Paul. A strong and imposing blocker, Paul enters the 2022 NFL Draft after gaining an abundance of experience as a four-year starter for the Golden Hurricane program. Originally of Nigerian descent, Paul possesses strong football ties with all three of his brothers also playing or having played college football. Paul is yet another versatile prospect on this list who spent two seasons at guard and two seasons at offensive tackle. Going forward, he projects to remain inside and man one of the guard positions. A 6-foot-4, 323 pound imposing figure, Paul especially impresses in the run game where his technical and advanced hands allows him to quickly take control of opposing defensive linemen.

Paul also happens to be a surprisingly agile athlete. The Houston, Texas native shocked at the NFL Scouting Combine by running the 40-yard dash in an eye-popping 4.89 seconds. A 109-inch broad jump further helped Paul round out a desirable athletic profile. Paul isn’t expected to get drafted until Day 3 but whichever team takes a chance on him may land a developmental starter at the guard position.

I have a confession to make. I’m a massive fan and believer in Cole Strange from Chattanooga, who has checked a bunch of boxes throughout the process. Strange prepares to enter the National Football League after making 41 career starts at the left guard position for the Mocs. Strange received a well-deserved invite to January’s Senior Bowl and like the aforementioned Parham did in Mobile, showcased strong versatility and adaptability skills by playing center. Strange is an extremely capable run blocker on film and his aggressive and overall nasty demeanor allows him to frequently take control of a rep.

Strange didn’t compete against top competition on a weekly basis but he made the most of his opportunity at the Senior Bowl by proving he belongs among high-level prospects. It’s worth noting that Strange played an excellent game against Kentucky this past season, further proving his ability to handle top-notch competition. The Knoxville, Tenn. native is an excellent athlete that ran the three-cone in 7.44 seconds, posted a 5.03 in the 40-yard dash and showcased his lower body explosion with a 120-inch broad jump. Strange’s play strength was also on display by recording 31 reps on the bench press. Strange qualifies as a late bloomer that will be a 24-year-old rookie but he carries some intriguing plug-and-play potential.