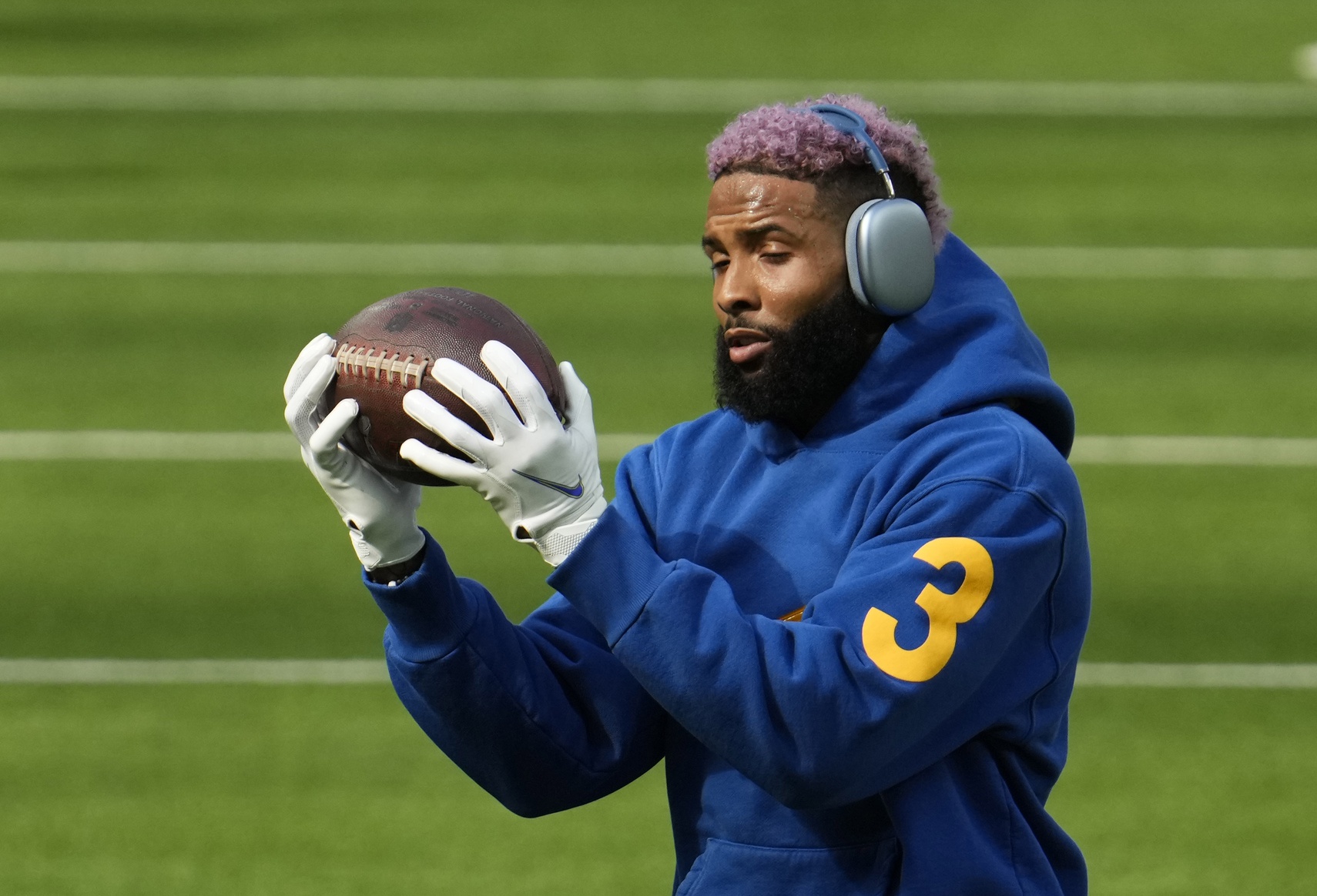 How Will Odell Beckham Jr. Find His Best Fit?

Wide receiver Odell Beckham Jr. is about to sign somewhere. On Sunday, ESPN’s Adam Schefter reported that Beckham hopes to whittle down his list of teams and sign by the end of the month. Beckham’s list of potential teams, according to Schefter, includes teams that have publicly pined for him—the Dallas Cowboys, Buffalo Bills, and New York Giants—and teams that have played a little harder to get in their pursuit—the Kansas City Chiefs and San Francisco 49ers.

Beckham’s free agency has been lost in the morass that is the NFL season and the chaos that was the NFL’s trading deadline. That is understandable, but it’s almost Thanksgiving. Beckham is probably going to sign with a team that has legitimate Super Bowl aspirations in the next couple of weeks. And that matters.

NFL teams don’t usually have the chance to add true difference-makers to Super Bowl-caliber rosters in mid-to-late November. The trade deadline has passed. Any free agents already available are typically available for a reason. Were a player of relevance to get cut, he would be subject to waivers, with the worst teams in the league having the first crack at claiming him. And who is cutting players of real significance (sorry, Eno Benjamin) at this point in the season, anyway?

This is part of why Beckham’s free agency looms large. At this point in the season, teams’ roster complexion typically only changes appreciably due to injury. Beckham is an exception, and this year, the lone exception to that rule.

Beckham’s free agency would matter less if production on his new team were implausible. But we have precedent for what Beckham can do in this scenario. Last year, Beckham played a crucial role on the Los Angeles Rams’ championship team as a post-trade deadline signing. He put up 21 receptions on 26 targets for 288 yards and two touchdowns as a needed complement to Cooper Kupp during LA’s playoff run. His impact on last year’s Rams provides evidence of what he can be for whatever team signs him this year. Beckham’s decision, like his decision last year and Antonio Brown’s decision to sign with the Tampa Bay Buccaneers in 2020, could play a major role in determining who hoists a trophy come February.

Beckham’s reported list of teams—the Cowboys, Bills, Giants, 49ers, and Chiefs—all currently have solid footing in the NFL’s playoff picture. This matters to Beckham, who, according to Schefter, axed the Rams and Green Bay Packers from his list due to their lackluster seasons. Most notably, one thing has remained consistent in media reports throughout Beckham’s free agency: he wants a long-term deal. For Beckham, it makes some sense to eschew the financial upside of taking a “prove it” deal for the security of a long-term deal, given the fact he is coming off two ACL tears to the same knee. But with a barren receiver market in free agency this offseason, wouldn’t it make sense for him to want to see what’s out there for him when teams have more money available? Beckham’s desire for long-term security sets off alarm bells about the overall health of his knee moving forward.

If Beckham’s primary goals out of his next destination are a long-term partnership and Super Bowl contention, that should help whittle down his list by ruling out two teams: the 49ers and the Giants.

The 49ers satisfy the Super Bowl contention Beckham craves; they currently have the second-best odds to win the NFC at +420. But the idea of a long-term partnership with the team seems dubious. San Francisco has already made large long-term commitments to three skill players: Deebo Samuel, George Kittle, and Christian McCaffrey. This is not to mention the fact that Trent Williams is the highest-paid left tackle in the NFL and that Brandon Aiyuk will be up for an extension after this season. Kyle Shanahan uses 11 personnel at one of the lowest rates of any coach in the NFL. A long-term deal for Beckham, with what they already have invested elsewhere on offense, seems gluttonous.

The Giants could offer Beckham a long-term partnership. Beckham would fill a glaring need at wide receiver, and they have a boatload of salary cap space in 2023. Beckham could also be one of the team’s veteran leaders as the Giants continue their roster overhaul. The coming home story practically writes itself.

The problem? Beckham would probably have to sacrifice his desire for Super Bowl contention in signing with the Giants. He would step into a situation with quarterback uncertainty. In weighing his options, Beckham will have to consider a world in which he catches passes from Josh Allen, Patrick Mahomes, Dak Prescott, or… Daniel Jones. Once that reality sets in, along with the reality that the Giants have wildly overperformed given the talent on their roster this season, it’s difficult to imagine a homecoming scenario for Beckham.

The three remaining teams on Beckham’s reported list can all make a compelling short-run and long-run case for signing him. The Cowboys have not been shy about their desire to add Beckham. He would make for a seamless fit into their offense, which has missed an Amari Cooper-like presence opposite of CeeDee Lamb this season. Dallas will also likely move on from the bloated Ezekiel Elliott (and potentially Tyron Smith) contract this offseason; they have the flexibility to make a long-term Beckham deal work. Their stability at quarterback will appeal to Beckham, as will their strength on defense. Beckham could see himself, and the Cowboys could pitch him on, being the missing piece. The allure of having that star on the helmet is real. The Cowboys are a legitimate threat to sign Beckham.

The Bills and Chiefs have similar surface-level appeals to sign Beckham. Allen and Mahomes are the current standards of NFL quarterbacking. Beckham would play a supporting role in either offense; Stefon Diggs and Travis Kelce function as their respective offense’s target vacuums. Beckham would not even necessarily feel pressure to become either offense’s No. 2 receiving option; Gabe Davis and JuJu Smith-Schuster have filled that role admirably for both teams. In the long run, Beckham could usurp either player as the number two option in the passing game, but that likely would not happen this year.

In Kansas City, Beckham’s role is ambiguous. The Chiefs have established roles for Smith-Schuster and Marquez Valdes-Scantling atop the depth chart. Beckham may be a more complete player than Valdes-Scantling, but Valdes-Scantling brings a needed size and speed dimension to Kansas City’s passing game. The Chiefs also often deploy Mecole Hardman as a gadget player. They are easing trade acquisition Kadarius Toney into the offense, with Sunday’s performance against the Jacksonville Jaguars a promising sign for his short- and long-term future. Skyy Moore exists. Beckham could have a role as a man-coverage beater in Kansas City, but it isn’t clear-cut.

The Chiefs could make long-term sense for Beckham. Only Toney, Moore, and Valdes-Scantling are under contract for the team at receiver beyond 2022. In the short run, the fit is harder to see. But the Chiefs have Mahomes—he’s sure to make a persuasive case.

In Buffalo, Beckham’s role is unambiguous. He would slide into the No. 3 receiver spot currently inhabited by unconventional waterbug slot receiver Isaiah McKenzie. McKenzie is a fine No. 3 receiver and an excellent gadget player, but Beckham at his best is a game-changer. A receiving trio of Diggs, Davis, and Beckham, with Dawson Knox as a tight end instantly becomes a nightmare to defend and probably the best group of skill players in the NFL.

Buffalo should be all-in on Beckham. Beckham should seriously consider Buffalo, where he’d fit in comfortably as a third option this year with a chance to grow into a more prominent role in the future, provided they meet his demands with a long-term deal.

However Beckham decides to whittle his list down will be fascinating to watch play out. The Bills and Cowboys stand out as the two best fits among Beckham’s reported list. We can also never rule out a surprise team; Schefter never reported Tampa Bay’s interest in Brown before the receiver signed in 2020. Beckham’s signing will likely be the last major personnel move of the season in the NFL. It may also play a role in crowning a champion.