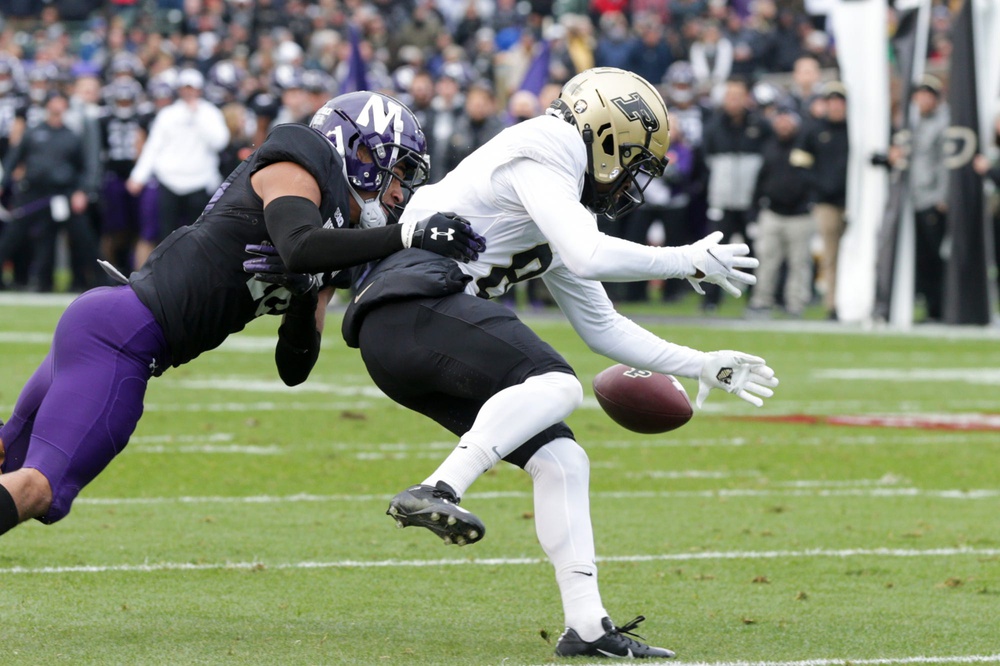 Does Notre Dame Have Another First-Round Safety in Brandon Joseph?

At this time last year, safety Brandon Joseph was set to enter his redshirt sophomore season with red-hot buzz as a pro prospect. The Northwestern safety was an AP All-American as a redshirt freshman in 2020 and had just finished showcasing himself as one of the country’s best ballhawks — logging six interceptions in the Wildcats’ COVID-19 abbreviated season. Joseph played beyond his years, showcasing a rare set of instincts and effective ball skills to convert turnover opportunities into actual turnovers and splash plays, putting him in the conversation to be among the top safeties in football.

And then the 2022 season happened.

Things went quickly array on the very first play of the season from Northwestern on defense, when Michigan State running back Kenneth Walker III ripped up the left sideline for a long touchdown run — leaving Joseph in the dust and quickly igniting some conversation about his range and speed as a defender. As the season progressed, Joseph was able to flash the ball skills and instincts in the passing game that made him so dynamic back in 2020 but he finished the year with just three interceptions to bring his two-year total to nine. But, as is usually the case for young phenoms to storm onto the scene, the conversation flipped to looking at Joseph’s game through a more critical eye. His play in 2021 raised questions about angles and range in the secondary while also offering some improvement opportunities as a tackler and defender in the run game.

If Joseph is going to be in the conversation to be a top safety when he does transition to the pro level, he’s going to need to have alleviated those concerns. Consider it “go time” for changing the narrative. And, fortunately for Joseph, he’s made a wise decision in how he hopes to achieve that — because he, of course,  transferred to Notre Dame.

“I came to Notre Dame to maximize my potential,” he said. “I think joining an elite defense like this […] they’re returning 18 starters and losing a guy like Kyle [Hamilton]. I think a guy like me stepping in and filling in the piece of the puzzle is exactly what we need to take this place to the next level.”

And this is where this conversation gets interesting. Joseph is not wrong in that the Irish are loaded with returning talent coming out of 2021 and that there is a clear vacancy on the depth chart to accommodate Joseph’s presence. But the contrast between Hamilton’s skillset and Joseph’s is a big one. Joseph is a self-described ballhawking safety with abilities to “shine” on the back-end of the defense. His growth opportunities against the run are plentiful, both when playing low to the line of scrimmage as an apex defender/as a second-level subpackage player or when running the alley from deeper alignments and being charged with serving as the last line of defense. The Michigan game from 2021 was a good showcase of how he was tested in this regard. So, too, was the previously mentioned Michigan State contest.

Meanwhile, in South Bend, Hamilton had served as a hybrid safety who played a whole bunch of different roles for the Irish defense. A ballhawking free safety wasn’t necessarily among them. Yes, Hamilton logged eight career interceptions, which is a healthy number. But he really starred in running from depth to fit the run and tackle in space. He was a two-high safety cheat code who offered pre-snap run reads to offenses without actually forcing the Irish to be short in the box to defend the run.

Can Joseph be that kind of player? He could be — although he’ll have to do it without the rare size and length and likely initial explosiveness that made Hamilton a rare talent in this regard. Joseph has shown an appetite for tackling in the past, but it wasn’t necessarily a strength of his game last season. He is going to need to hold himself to a higher standard for his play in order to fulfill that potential and become the well-rounded safety we thought he was 12 months ago when I was singing his praises as a top prospect. He was good. But with his instincts against the pass, Joseph can be great.

How the Irish will look to make the most of his skill set should be an interesting development, too. Will Head Coach Marcus Freeman’s defensive infrastructure reign supreme over the Irish again in 2022, paving the way for Joseph to take some of the reps as designed for Hamilton? And if that is the case, does Joseph have the ability to pull it off as compared to being a compromised run defender from depth who may struggle to finish as a tackler? Or will new Defensive Coordinator Al Golden infuse a fresh mentality? The buzz out of South Bend seems to favor the latter, which opens up a more ideal scenario for Joseph to be his best self.

Golden has run several defensive variations across his years in football, toggling between both odd and even fronts — expect to see more even front looks from the Irish as the defense has been promised to be “aggressive.” Joseph’s new teammate, DJ Brown, has indicated there will be more disguising of intentions on the back end for the safeties at Notre Dame this year.

“I feel like, for us, it’s just a lot of variation,” Brown stated. “Really just playing both zone and man coverage. I feel like last year we played a lot more man coverage, so just like a variation and just changing things up. It’s kind of hard for offenses to read.”

These changes would be good for Joseph, who can play from depth and star in the same back-end role that he’s prescribed himself at being at his best.

It all adds up to a fascinating set of conditions. A player who has unanswered questions on his resume embracing a new program to fill the shoes of a departed first-round pick, only to have the defensive system potentially evolving from the one we saw last year. Romanticizing Joseph filling Hamilton’s shoes is fine but remember: these are different players with different strengths. It will be up to the Irish to find out how much of that overlap can possibly exist. But for Joseph himself, he also has a challenge to grow into a more well-rounded player and add polish to all phases of his game. Then, and only then, will he be ready to threaten the draft stock that Hamilton rose to in April.