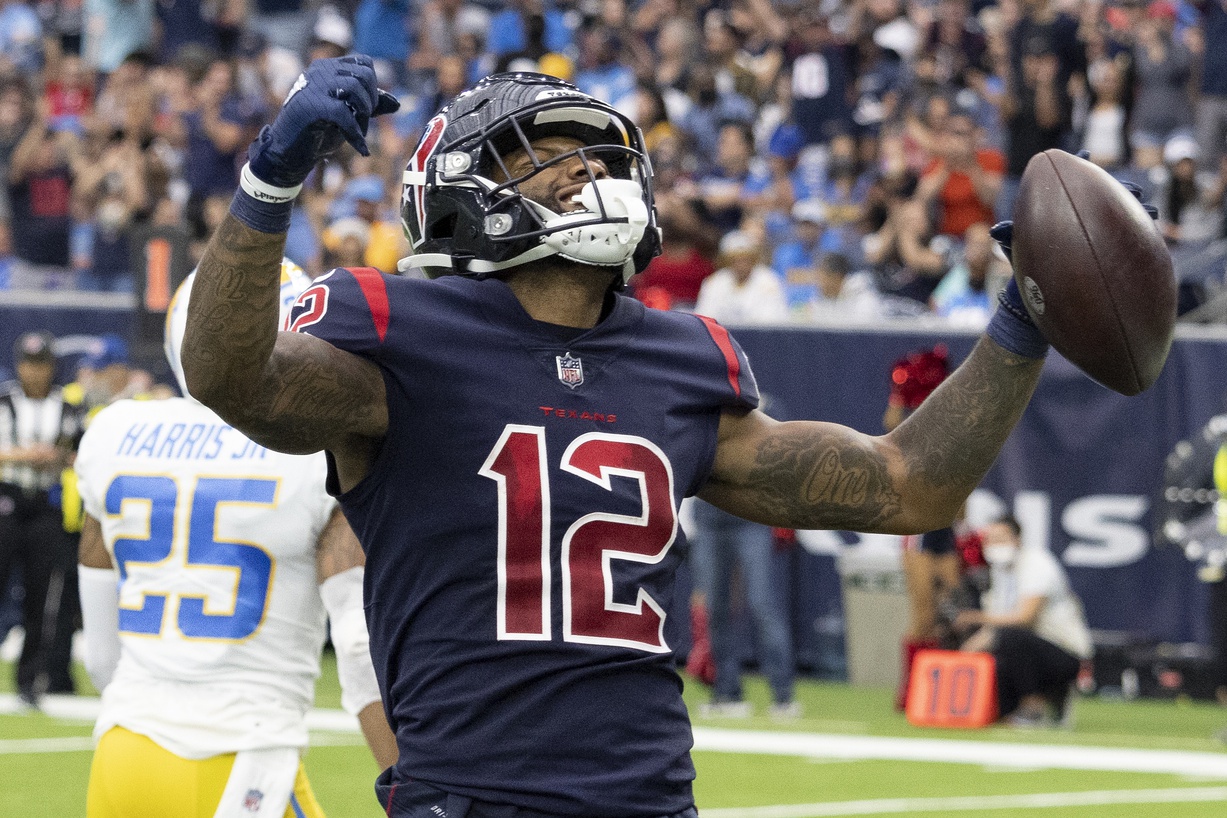 Why Texans’ Nico Collins Is Poised For Breakout 2022 Season

The Houston Texans are going to rely on various young players throughout the 2022 campaign. Texans General Manager Nick Caserio is still engaging in the process of revamping a Texans roster he helped tear down. The Texans are rebuilding, and that means plenty of opportunity for ascending talents on both sides of the ball. Several rookies are expected to start in Houston, as are sophomore players. Wide receiver Nico Collins is at the forefront of that second-year group. The former Michigan product appears poised for a breakout campaign.

The No. 89 overall selection in the 2021 NFL Draft, Collins joined a position group that was dominated by Brandin Cooks. Cooks led all Texans receivers with 1,037 receiving yards, and Collins finished second on the team in that category despite recording a distant 446 yards. More of the same is generally expected in 2022 with Cooks returning via a lucrative offseason contract extension to spearhead a top-heavy group, but Collins should earn more reps from the beginning of the season. Collins was a named starter in Week 1, but a groin injury suffered in Week 2 cost him several games, and in turn, valuable targets.

Overall, Collins wrapped up his rookie campaign by appearing in 14 regular-season contests with eight starts. He recorded 33 receptions for 446 receiving yards and one touchdown while playing 59% of the Texans’ offensive snaps on the season. With that number likely to approach 70% in 2022, a 650-plus-yard season for Collins feels within reach.

Collins’ biggest performances occurred when he was most involved toward the end of the season. Collins totaled season-highs in receptions (5), targets (10), and yards (69) in a mid-December blowout loss to the Seattle Seahawks. Collins came close to surpassing those totals in Houston’s season finale, a Week 18 three-point loss to the Tennessee Titans. Collins caught three passes for 67 yards in that defeat, including a 30-yard gain (just two yards short of his season-long reception). It’s a strong indication that Collins built momentum towards the conclusion of the campaign that should lead to increased production in 2022.

Collins should benefit from an improved version of second-year quarterback Davis Mills. Mills showcased enough talent in 2021 to convince the Texans’ brass to continue betting on his development. Caserio and the Texans passed up several opportunities to add rookie or veteran quarterback competition to their room. Mills and Collins built trust and chemistry as fellow rookies last season. The game typically slows down for quarterbacks in year two, an evolution that should allow Mills to take the desired step forward.

Perhaps the more important occurrence that should positively impact Collins’ outlook was the promotion of new offensive coordinator Pep Hamilton. Hamilton developed a strong relationship with Mills and Houston’s offense as a whole last season while working as the Texans’ quarterbacks coach and passing game coordinator. Hamilton has had a hand in building effective offenses in previous stops in Los Angeles (Chargers) and Indianapolis.

Hamilton is a well-respected offensive coach that has the development of Justin Herbert and Andrew Luck on his resume. It’s been quite a while since Hamilton was an offensive coordinator in the league, therefore it’s difficult to forecast the specifics of what his 2022 offense may look like. Hamilton has previously preferred to oversee a creative rushing attack that builds around the strengths of his players. It’s good news for Collins and Co.

The Texans’ receiver room still doesn’t feature much talent, but the drafting of John Metchie III moves the needle forward. While Collins is expected to start opposite Cooks on the boundary, Metchie should quickly play a role in three-receiver sets. Rather than take away from Collins, Metchie’s presence should help Collins see more favorable matchups while stretching opposing secondaries a bit thinner than they did last season.

Collins is a big-play threat that possesses short-area acceleration, tremendous ball skills, and deep speed. A mismatch on the boundary, Collins has all of the tools to develop into a quality NFL receiver. The Texans are invested in his development and Collins will be a difference-maker for the Texans’ passing offense.