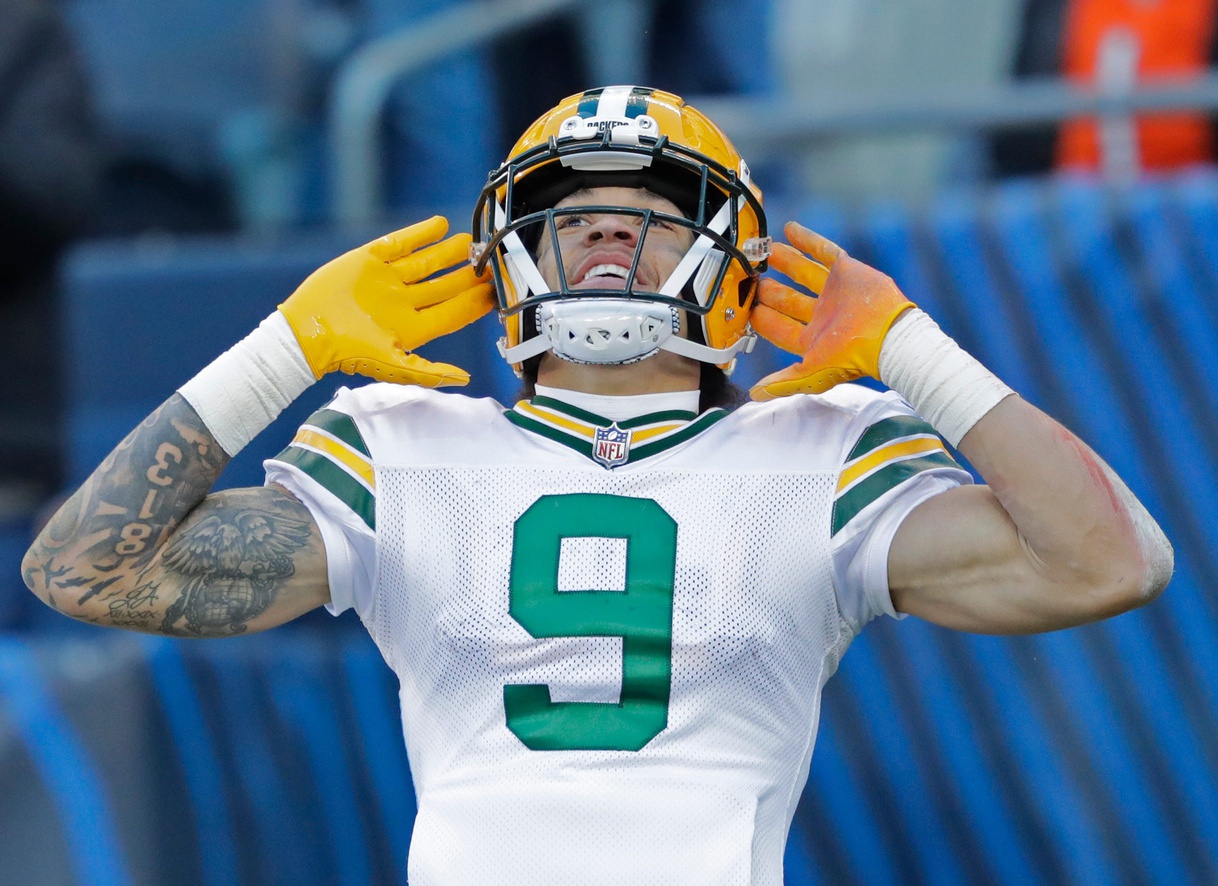 Christian Watson’s NFL career got off to an inauspicious start. The Green Bay Packers rookie wide receiver dropped a 75-yard touchdown on Green Bay’s first offensive play from scrimmage this season. In some ways, this set the tone for what had been a difficult and disappointing season for Watson and the Packers offensively. Green Bay began the season 3-6, their offense failing to top 22 points in all but two games on the season. Watson barely produced, combining for 10 receptions for 88 yards during this stretch.

But over the past month, Watson’s performance has been the catalyst for an improved Packers offense, which has topped 28 points in three of its past four games. Watson’s 15 receptions for 313 yards and seven touchdowns (with another coming on the ground) during this stretch have played a significant role. Green Bay, and quarterback Aaron Rodgers, did not have a legitimate go-to target before Watson blossomed. Now, they do.

Watson has been a poster child for this year’s NFL rookie wide receiver class breaking out in recent weeks, but he has been far from the only player in his class to see his numbers rise during the stretch run.

Tennessee Titans rookie wide receiver Treylon Burks has followed somewhat of a similar career arc to Watson. Before mid-November, Burks, the 19th overall pick in this year’s NFL draft and the player the Titans were counting on to fill the void left by A.J. Brown, had barely produced after a difficult offseason program, combining for only 13 receptions for 153 yards in Tennessee’s first nine games. On Thursday Night Football in Week 11 against Watson’s Packers, Burks broke out, with a game-high seven-catch, 111-yard performance. That production continued into Tennessee’s next game, where Burks led Tennessee receivers with four receptions for 70 yards. In Week 13 against Philadelphia, Burks looked to be off to a strong start, catching a 25-yard touchdown on Tennessee’s second drive. Unfortunately, he suffered a concussion on the play and did not return.

The late-season breakout rookie wide receiver trend extends to one player who had produced early in the season: New York Jets wide receiver Garrett Wilson. Wilson began his career with 28 receptions for 314 yards and two touchdowns in his first seven games: a 68-reception, 763-yard, five-touchdown pace over a 17-game season. With some excellent moments such as his 102-yard performance in Week 2 against Cleveland sprinkled in, this would have made for a solid rookie season. However, over his last five games, Wilson has detonated, putting up 29 receptions for 476 yards and two touchdowns. His 17-game pace? A torrid 99 receptions, 1618 yards, and seven touchdowns. Wilson has seen his yards per target almost double in this span (6 to 11.33) and his catch rate balloon from 54% to 69%.

Wilson’s emergence over the past month closely mirrors that of Philadelphia Eagles wide receiver A.J. Brown as a rookie in 2019. During the first half of his rookie season in Tennessee, Brown put together a full-season pace of 47 receptions, 740 yards, and four touchdowns. In the final eight games of his rookie season, Brown went nuclear with 63-reception, 1,494-yard, 11-touchdown prorated numbers that gave the football world a glimpse of the player he would eventually become.

Players such as Watson and Burks may be following more in the footsteps of Detroit Lions wide receiver Amon-Ra St. Brown. St. Brown did not show much during the first 11 games of his rookie season last year; with five or more catches in only three games, his full-season pace equated to 39 receptions for 352 yards. However, St. Brown broke out his final six games as a rookie, catching at least eight passes for 73 yards in every game with prorated numbers of 144 receptions, 1,587 yards, and 14 touchdowns. His level of play has sustained into this season, as he has become one of the league’s most productive wide receivers.

In-season rookie wide receiver breakouts happen on a smaller scale, too. Skyy Moore has doubled his (modest) full-season production over the past three weeks as opportunity has arisen for him due to injury in Kansas City’s offense. Before tearing his ACL in Week 11, Wan’Dale Robinson had begun to earn a significant target and air-yard share in the New York Giants’ offense, culminating in a 100-yard performance that accounted for most of his full-season production against the Detroit Lions; the underlying metrics were there for a late-season breakout for Robinson.

Other players, such as Alec Pierce (four receptions, 86 yards, one touchdown), Jahan Dotson (five receptions, 54 yards, one touchdown), and Drake London (six receptions, 95 yards) had isolated performances on Sunday that do not fall into the broader category of breakout trends, at least yet. But these players have all performed at different points of the season. They all likely have bright futures, considering their pedigree (all were first or second-round picks) and performance in the NFL to date, provided their situations (read: future quarterback situations) allow for it. Their performances on Sunday are something to keep in mind when identifying the next breakout rookie from this wide receiver class.