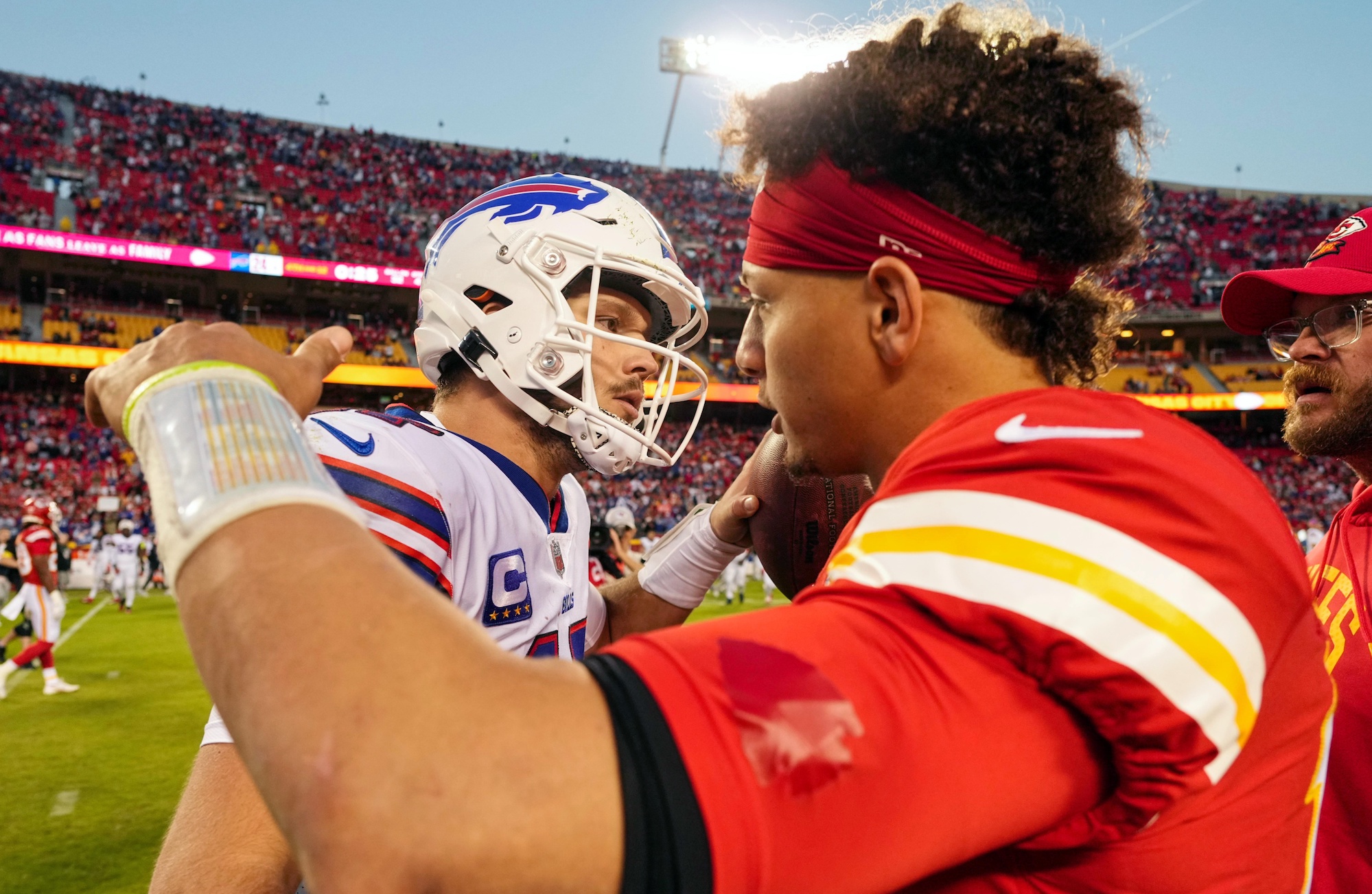 Who Is 2022 NFL MVP? Making Case For Top Candidates

Through nine weeks of the 2022 NFL season, the MVP race seems to have boiled down to three quarterbacks who have outperformed all of the rest this season: Patrick Mahomes, Josh Allen, and Jalen Hurts. There still isn’t a clear standout candidate though, and our midseason awards voting here at The Draft Network reflected that. All three of those quarterbacks received first-place votes in a very tightly contested race.

All three candidates have a solid résumé so far this season. Each of them has their own unique reasons for why they deserve to be the 2022 NFL MVP, so let’s break down each of their MVP cases a little over the halfway point of the season.

Surprise, surprise. The electrifying young quarterback that’s become the face of this exciting, young generation of quarterbacks is here in the thick of the MVP race. According to our staff (betting odds), Mahomes is actually the frontrunner. That shouldn’t be too much of a shock. Now in his fifth year as the Chiefs’ starting quarterback, Mahomes leads the league in passing yards (2,605) and passing touchdowns (21) despite being fifth in the league in passing attempts. He’s on pace for 45 touchdowns and the highest passing yards total of his career.

Perhaps what’s most impressive about Mahomes’ season thus far isn’t just the numbers but the cast of characters he’s doing this with. Ahead of this season, many people (including this writer) believed the Chiefs’ step back in dynamic offensive playmakers would be enough to end their dynasty atop the AFC West. Elite wide receiver (and runaway Offensive Player of the Year candidate) Tyreek Hill is gone. The top two pass-catchers behind tight end Travis Kelce are veterans JuJu Smith-Schuster and Marquez Valdes-Scantling, and neither was on the team last year. Second-round rookie receiver Skyy Moore has been a non-factor in the offense. Yet Mahomes has managed to ball out regardless, lighting up the stats sheet and leading the Chiefs to a 6-2 start and the AFC West lead.

Well, well, well…look who we have here! Heading into the 2022 season, quarterback was one of the biggest questions on the Eagles’ roster. Hurts had just started to hit his stride in the back half of last season apart from an ugly late-season matchup with the Giants, but doubts remained about whether Philadelphia could enjoy sustained success with him under center.

Hurts has proven all doubters wrong and is exceeding expectations with how far he’s come along in his development in year three. He’s been asked to pass more and is finding tons of success doing so with new career highs in touchdown percentage, completion percentage, and passer rating. He’s also on pace for over 1,000 more passing yards and 10 more touchdown passes than he had last year. That’s not to mention all that Hurts has been able to do with his legs—he’s added 326 rushing yards and six rushing touchdowns to his overall production in the first eight games.

Most importantly for his MVP candidacy, Hurts has led his team to the sole perfect record in the NFL at the midway point of the season. The Eagles are 8-0, and it’s largely because of Hurts’ ability to make a difference as not just a playmaker but a real leader on his team.

As with Mahomes, it’s not much of a surprise to see Allen on this list. Anyone who has watched Allen play knows that he’s special. The things he can do with his rocket arm and shocking mobility for his size are genuinely incredible to watch. And through the first six games of the season, we were gifted with a show of a white-hot Allen throwing and running the ball as he pleased all over opposing defenses. Over that span, he already had nearly 2,000 passing yards and 17 passing touchdowns, on pace to shatter the single-season passing yards record and come close to breaking the 50-touchdown mark for the first time in his career. At the same time, he was dominating opposing defenses with his legs, averaging over 40 rushing yards per game with two rushing touchdowns on the season.

In the two weeks since the Bills’ bye week, Allen’s production has taken a bit of a nosedive. After only one game in his first six weeks with fewer than 290 passing yards, the fifth-year quarterback didn’t even breach 220 yards passing in each of his games against the Packers and the Jets. He threw two interceptions in each game too, doubling his season total through the first six weeks. This past week’s matchup with New York also ended his 10-game streak with at least one passing touchdown dating back to last season, including the playoffs.

What might hold Allen back from the MVP award this year is the lack of consistency in the face of all of the high expectations that come with his natural talent. His production and ability to protect the football have floundered in the last couple of weeks, and Allen needs to right the ship to get his MVP candidacy and season back on track. There’s also the uncertainty of whether he may miss games with the UCL sprain in his passing elbow. If Allen misses significant time with the elbow injury, his hopes for the 2022 NFL MVP award will be shot.