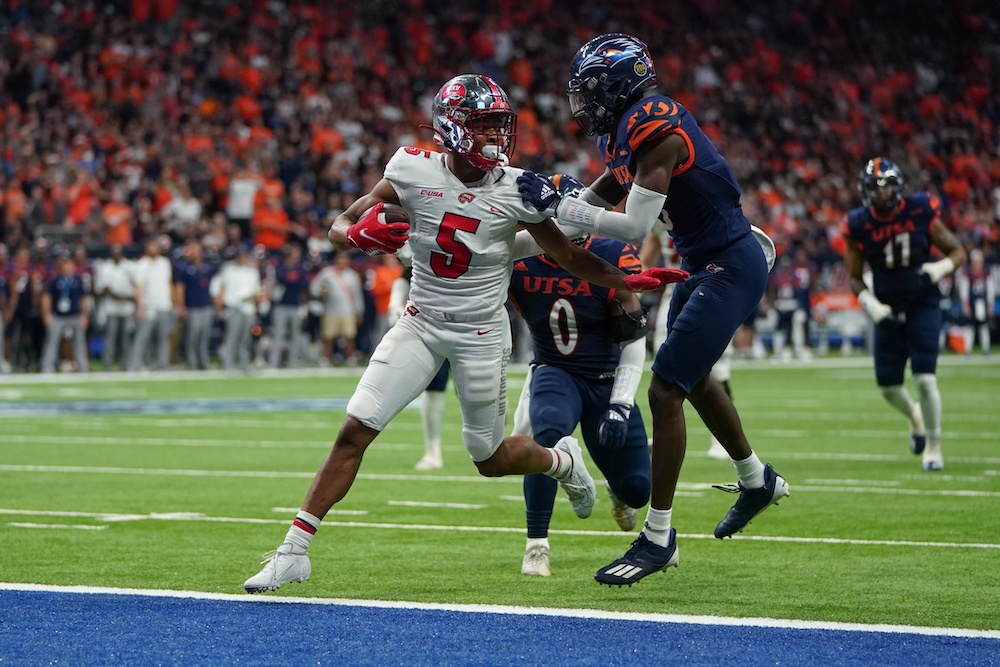 Woolen is way too toolsy to slip this far. He falls into the Bucs hands to kick off Day 3.

Jeremiah Owusu-Koramoah was an excellent addition last spring, but Jackson provides depth into a rather underwhelming front seven.

Drew Lock doesn’t move the needle. Give me Howell here as the new face of the franchise… for now.

A day-two pick before his injury, Clark will miss his rookie campaign but would provide another uber-athletic talent at the second level.

Another massive man, if the small townhouse in Mekhi Becton fails to play another snap in New York, Faalele could be a nice insurance plan.

The most dynamic tight end in the class, Likely would add a unique dynamic to the Giants’ offense.

After a questionable first two days of picks, adding Domann to fill their vacancy at the buffalo nickel spot would be a home run add on Day 3.

Whether Saquon Barkley remains in the Big Apple past this fall remains to be seen, and if he is on the way out, Spiller could be a nice heir apparent.

A long, lean, physical corner, Williams’ tape was expectedly dominant at the Division II level and warrants a pick here early on Day 3.

An insurance policy for Russell Wilson, Josh Johnson is currently QB2 in Denver and why not add Zappe, a gun-slinging talent that broke the FBS record for touchdowns in a single season? He could start in dire straits.

Lighting in a bottle.

After taking David Bell, I doubled down here with Shakir, a slot nightmare that dominated at times at the Senior Bowl.

Nick Boyle is a fine TE2, but Otton provides more pop at the position behind Mark Andrews.

A perfect CB4, Bryant will serve as a special teams ace from the onset of his career.

I liked Chad Muma here on Day 2, but Sanborn will be a decade-long nucleus defender for Belichick that fills a depth need in the middle.

An underrated 1-tech mover of men, Ridgeway’s film wasn’t the most impressive throughout the fall, but he was consistently doubled and game-planned for along the interior. I love this fit.

An athletic marvel, Henningsen could be a steal here in the fourth round. He projects seamlessly into an odd front.

Cleveland needs fresh legs along the front four, and while Alex Wright was a nice addition, plugging in the Buckeyes’ most effective pass rusher opposite Garrett as a DPR should intrigue GM Andrew Berry.

I love the intangibles on Clemons. Long, powerful, explosive, he would challenge Andrew Van Ginkel for snaps and, at worst, add much-needed depth off the edge.

He has a LONG way to go as a football player, but all the tools are there to become an impact defender at the second level. An uber-athletic specimen, Smith’s film was flat out unwatchable at times, but the league – as we know – bets on traits.

A locker room culture-changer, Luketa also happens to be a heck of a football player, fits the Belichick script, and, accordingly, would provide some pop within an aging edge unit.

Doubs doesn’t move the needle drastically as a physically gifted pass-catcher, but he touts solid hands, a competitive drive at the catch point, and smooth footwork that should translate to some success on Sundays.

After losing Keanu Neal, adding a versatile talent like Pola-Mao would be wise here within the roof of the secondary.

The class’ bonafide stud at the punter spot, with so many fourth-round selections to work with, understanding the importance of field position in the NFL game remains paramount and Araiza is a game-changer with an absolute bazooka for a leg.

A third-down talent with excellent hands, he would be the lightning to Derrick Henry’s thunder.

He isn’t the sexiest prospect in the class, but Ferguson will start in the NFL for a decade due to his well-rounded, polished skill set as both a run blocker and pass-catcher.

Brady’s newest version of Wes Welker, Julian Edelman, Chris Hogan… you get the point. He fits.

The 49ers need corner help, and while Armour-Davis isn’t the most refined prospect on the outside, he fills a massive need, and has a nice skill set to work with as a ball of clay for defensive coordinator DeMeco Ryans.

Versatile in that he has experience up and down the defensive line, throw Booker into a spot and he’ll more than hold down the fort for you. Overpowering at times during the Shrine Bowl, Booker is my sneaky good add here in the fourth.

An explosive pass-catcher, he fits the high octane Joe Burrow-led offense to a T. The fastest tight end at the combine, he would be able to stretch the seam from Day 1.

New England’s secondary looks like a bingo hall with aging bodies in abundance. I like the addition of Marcus Jones, but adding Evans, a wiry aerial stalwart that has the potential to progress into a high-level corner could be a way to go here with a veteran backend.

One of the most athletic corners in the class, I wouldn’t be surprised to hear McCollum’s name much earlier on Day 3. However, he fills a massive need here with Levi Wallace and Justin Layne set to start opposite each other.

A former five-star recruit, Jones’ feet are some of the quickest in the class. BPA here for me.

You can never have enough pass rushers, and I was extremely impressed with Robinson at the Senior Bowl. Powerful and explosive – he’ll work into snaps this fall.

He’s going to go somewhere early on Day 3. While Tyler Huntley remains a nice backup, Kelley, a 6-foot-7 legit dual-threat option, could be used to flip picks next fall if a team remains highly interested in his skill set. He had 60 total touchdowns last fall.

A downhill talent with ideal ‘MIKE’ traits, McFadden could blossom alongside Bobby Wagner.

I get they took Dez Fitzpatrick last year in the fourth round as well, but Melton is one of my sleeper pass-catchers and has the quickness and shake to have an impact on both offense and on special teams. I think he works into a substantial role in what could be a new-look Titans offense.