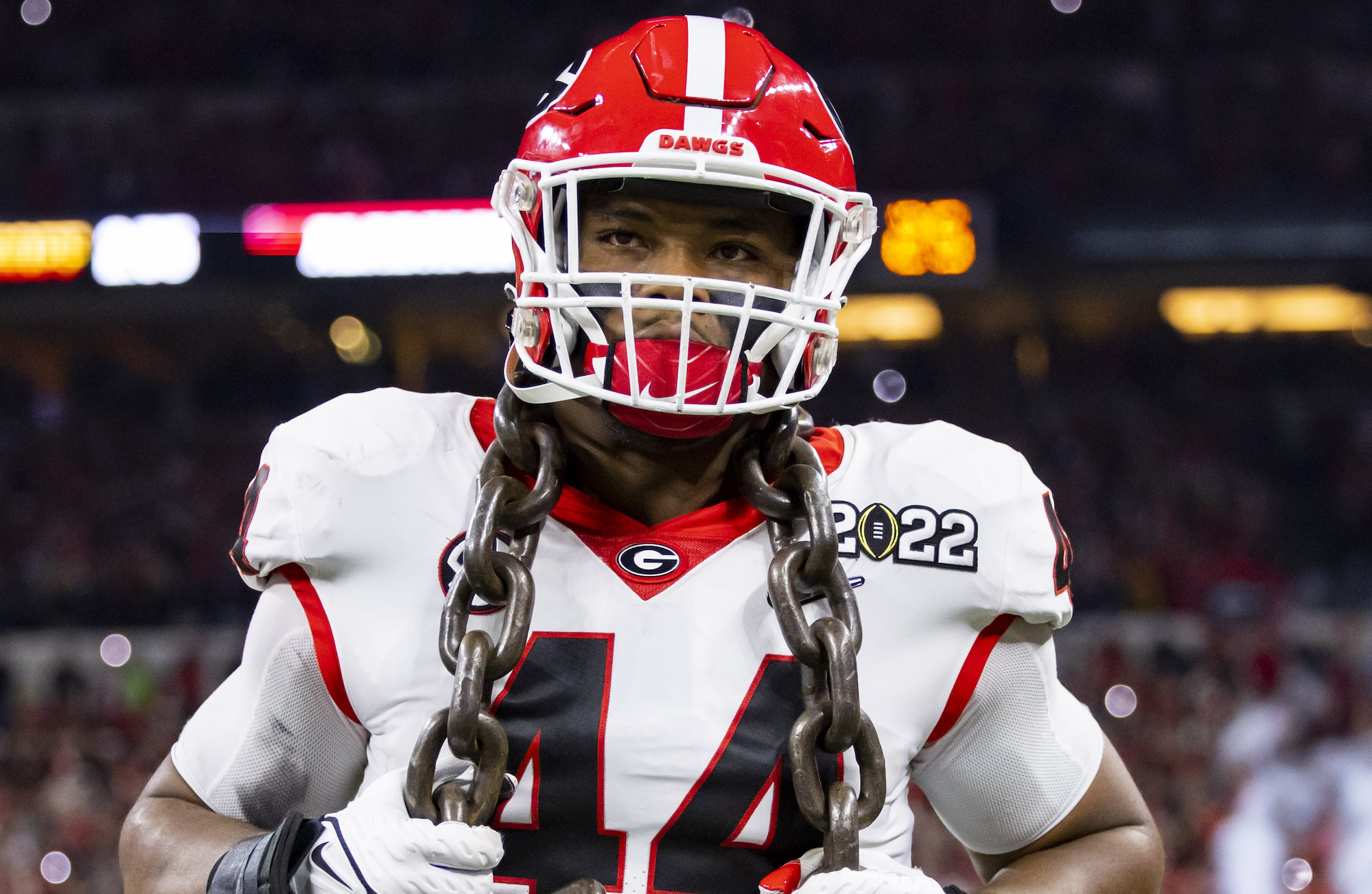 We’ve finally arrived at the 2022 NFL Draft, and it’s time for draft analysts to submit their final NFL mock draft of 2022. Below is my final and best guess at what will happen Thursday night in what’s set up to be the most unpredictable first round in recent NFL draft history.

A few quick notes about this mock draft. This is my submission to The Huddle Report’s mock draft competition. It’s the industry standard for mock draft scoring, and I’m one of only two members of TDN’s current staff who’s won this competition in the past. The great Joe Marino is the other. Please make sure you let Kyle Crabbs (@GrindingTheTape) know he has yet to win one despite his excellence in the draft community.

Second, this mock draft admittedly includes some surprising picks. It’s strategic on my part. In order to win the mock draft competition, you need to hit on some unexpected selections. Considering this year’s NFL draft is all about the unexpected, I’m taking some wild swings in an effort to become a two-time champion.

Lastly, the order in which the players come off the board in this mock draft isn’t necessarily a reflection of how I have them rated amongst their peers. Follow me on Twitter (@BryanPerezNFL) for some real-time commentary to get my in-the-moment feels about how the draft unfolds.

No, I don’t think Walker is the best player in the class, and I won’t agree with this pick if it’s made. But, the NFL loves traits and in a draft class without a clear No. 1 overall player, Walker has the most traits and the highest ceiling at a premium position. As a result, he’s the first player off the board.

A local college star stays close to home with Hutchinson going to the Lions. Landing Hutchinson at No. 2 overall is the first stroke of luck the Lions will enjoy in many, many years. He’s a cornerstone player.

I’ll be surprised if Neal isn’t the first offensive tackle off the board and the Texans need help protecting their young quarterback. Neal has been a blue-chip prospect since the day he strapped on the pads and nothing’s changed. He’s a plug-and-play 10-year starter.

The Jets need an offensive tackle to protect their most important investment, quarterback Zach Wilson. Ekwonu has the demeanor and athleticism to be a high-end starter for a long time.

Call it a hunch, but I think the NFL values Johnson’s skill set more than draft media has this year. He leapfrogs Kayvon Thibodeaux and becomes the next big-time pass-rusher in New York.

Is Pickett one of the 10-best players in the 2022 NFL Draft? No. But he is the best quarterback in this year’s class and the Panthers need a signal-caller who can step in and start right away. Pickett is that guy.

The Giants land an instant starter at offensive tackle to line up opposite Andrew Thomas. Cross is the clear OT3 in this draft and should end up being a top-10 pick.

Thibodeaux undergoes a minor slide but still ends up a top-eight selection. He has as much natural ability as any player in this year’s draft, but questions about his love for football push him down a few slots.

Gardner is the best cornerback in the 2022 NFL Draft and the Seahawks have a need at the position in their starting lineup. This is an ideal need-meets-value selection.

Stingley’s draft stock is on fire right now and this may be a bit low for his draft projection. In fact, he could be the Jets’ pick at No. 4 overall. Either way, it feels like he’s destined to line up in the Big Apple next fall.

Carson Wentz isn’t good enough to dissuade the Commanders from taking a potentially game-changing quarterback like Willis. Washington will never be a serious contender until they fix their quarterback situation. Willis has the highest ceiling of all the quarterbacks in the 2022 NFL Draft.

Arguably the best football player in this year’s class, Hamilton fills a huge need with a ton of talent for the Vikings’ defense. If this pick actually happens, we’ll look back three years from now and wonder how in the world Hamilton fell this far.

Lovie Smith is a defensive head coach, and while he doesn’t value cornerbacks as much as you might think, the Texans have to use this pick to secure a potential starter. McDuffie is the best prospect left on the board and combined with Evan Neal, gives Houston two immediate upgrades.

The Ravens have to keep investing in quarterback Lamar Jackson and London is the kind of elite contested-catch wide receiver that’s missing from Jackson’s arsenal. Pairing London with last year’s first-round pick, Rashod Bateman, will give Baltimore a chance to compete with the rest of the AFC’s high-flying passing attacks.

Karlaftis is another player who I think has more fans in NFL war rooms than he does in draft media. He’s a high-intensity player with top-end strength at the point of attack. The Eagles need an upgrade at EDGE and Karlaftis has rookie-of-the-year potential.

Olave is the best route-runner in the 2022 NFL Draft. He’ll create the necessary separation needed for a quarterback like Jameis Winston, and he’ll have as good of a chance as any first-year receiver to top 1,000 yards as a rookie.

The Chargers have to keep investing in quarterback Justin Herbert, and with Penning being the best offensive tackle remaining on the board, it’s a no-brainer pick. He’s a nasty dude who will bring serious intimidation to Los Angeles’ offense.

The Eagles go back to the Alabama talent factory and select Williams to pair with last year’s first-round wideout, DeVonta Smith. Once healthy, Williams and Smith will be one of the most exciting young wide receiver tandems in the NFL.

This may seem like an odd choice, but at this point in the draft, Davis offers way too much value to pass up for the Saints. Davis is a one-of-one unicorn who slides this far because of a perceived lack of positional value. Like Hamilton, we’re going to look back and wonder how the NFL passed on him so many times.

Is Ridder a true first-round quarterback? Probably not. But he is a quality prospect at a position the Steelers have to take a chance on. He has more natural ability than Mitch Trubisky, who’s currently slated to start for Pittsburgh in 2022. That’s a scary thought.

Wilson’s slide ends here and it’s great news for him. He ends up in an ideal offense with a quarterback who will take advantage of his quality route-running and three-level ability.

The Packers have to give Aaron Rodgers playmakers who can make things happen after the catch. Burks offers the kind of short and intermediate target Rodgers can pepper countless targets to and let him do his thing with the ball in his hands. Burks in Green Bay has OROY potential.

Booth is a favorite among the TDN scouts. His medicals have to check out in order for him to be a surefire first-round pick, but the Cardinals desperately need help in the secondary and Booth can provide it right away.

The Cowboys would’ve loved Burks here, but they’ll settle for a new starting safety in Hill who’s been grossly overlooked throughout the 2022 NFL Draft process.

It feels like this pick has been a favorite among mock drafts since the Senior Bowl, and there’s no reason to change it now. Johnson is the best interior offensive lineman in the 2022 NFL Draft who will level up Buffalo’s offense from day one. This, too, is a scary thought (for good reasons).

Who knows what the future holds for Titans wide receiver A.J. Brown. He could be the next high-profile wideout to be traded. But even if he remains in Tennessee, the Titans need to bolster their receiver depth chart despite the trade for Robert Woods. Moore is this year’s top slot prospect who reminds me quite a bit of Golden Tate.

Green could go a lot higher than this, but if he’s on the board when Tampa Bay is on the clock, it’s a pick that makes almost too much sense. The Buccaneers need help along the interior of their offensive line and Green is a day-one starter.

The Packers gave Rodgers the help he needs with their first pick in the round and now they give some love to the defense with Winfrey, who was one of the most dominant defenders at the Senior Bowl. Winfrey has all the traits to become an eventual Pro Bowl player.

This pick is out of necessity for the Chiefs, who suddenly find themselves in a division with Justin Herbert, Russell Wilson, and Derek Carr (who now has Davante Adams). If they don’t upgrade their cornerback room, they’re doomed. Elam is a swing at doing that.

If the Chiefs’ defense can’t stop the AFC quarterbacks, then they better have the weapons on offense to keep scoring. The loss of wide receiver Tyreek Hill is a huge blow to quarterback Patrick Mahomes and the passing game, and while Dotson isn’t nearly the kind of playmaker Hill is, he at least offers an injection of playmaking skills to the passing game.

The Bengals had a busy offseason upgrading their offensive line, but they can’t ignore their secondary in the first round. Cine is riding a lot of buzz heading into the 2022 NFL Draft and this feels like a logical draft spot for him.

With Ridder off the board earlier in the round, the Lions will focus on quarterback in the second round. With the last pick in the first round, they swing for the fences on the wide receiver who has the best combination of size and athleticism in the class.