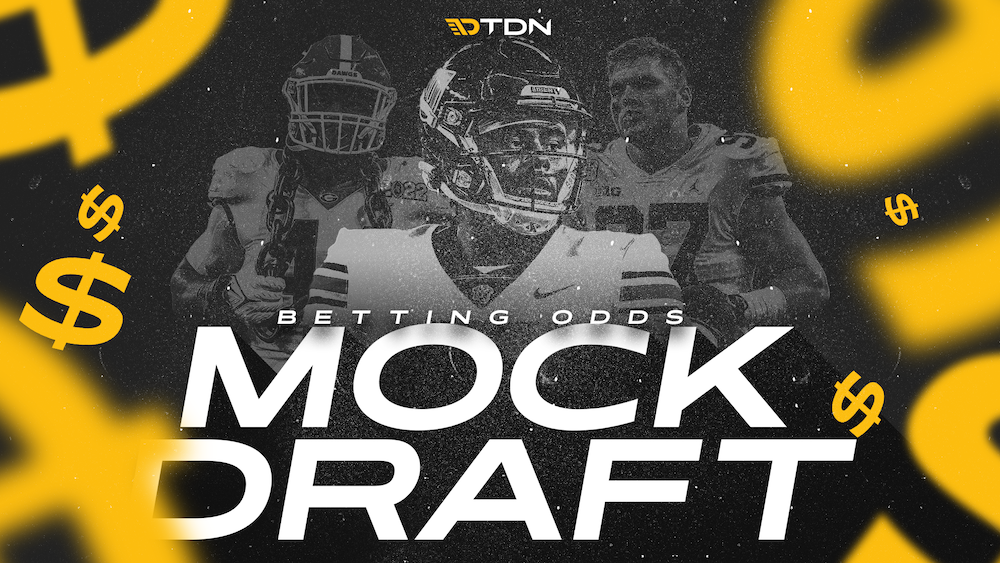 As the 2022 NFL Draft draws closer, the volume of mock draft posts increases exponentially. It’s a wonderful time of year, honestly, and we can see all sorts of creativity play out.

There are predictive and “what I would do” mocks. There are mocks with trades, mocks without them, best player available mocks, and so much more. However, this mock will be a bit different than all of those. This mock draft is based on available betting odds for teams, players, position groups, etc.

Before we get into the picks, here are the parameters for this mock:

— Players should be chosen around their listed over/under whenever possible

So let’s take a look at what a first-round mock draft looks like based only on betting odds.

While the confidence in Hutchinson being the first overall pick has waned in recent weeks—I’d predictively guess Travon Walker is drafted No. 1—the former Wolverine is still the odds-on favorite to be the top pick at every sportsbook.

A recent surge has catapulted Thibodeaux back into the top two and he’s now the slight favorite to be the Lions’ selection here. Note, sportsbooks are more worried about Hutchinson falling to No. 2 than they are about Travon Walker or Malik Willis going over Thibodeaux.

Ekwonu was the favorite to be the No. 1 overall pick a few months ago, but it appears EDGEs will dominate the very start of the draft. Another EDGE could go here, but the odds lean toward Ekwonu over Travon Walker. Ekwonu is a -190 favorite to be the first offensive lineman off the board. Note: Don’t rule out Sauce Gardner here—his odds have been shortening recently.

The betting market, and Jets fans, would love a pass-rusher here, but the oddsmakers don’t see Hutchinson or Thibodeaux falling to No. 4. So the Jets make the next-best move by selecting the top corner in the class, who’s -450 to be CB1.

Neal and Ekwonu are co-favorites to be the Giants’ pick here at No. 5. Since Ekwonu is off the board, Neal is the easy pick here. Oddsmakers can’t see the Giants passing up on one of the elite OTs despite having another selection two picks from now.

The quarterback betting markets are all out of whack—for both Pickett and Malik Willis. Willis is the favorite to be the first passer drafted, but Pickett is the favorite to be Carolina’s selection at No. 6. Willis can be found as high as -250 to be a top-10 pick while also being -115 to go outside the top 10. For this spot, we’ll just rock with the specific favorite to go No. 6 overall. Note: Charles Cross could be a value bet here.

This is a weird one because the sportsbooks and mock drafters agree that it’s hard to find a snug landing spot for Walker if he doesn’t go to the Jaguars with the top pick. However, pass-rusher and offensive line are the two biggest needs and the two most likely selections for the Giants according to betting odds, so they take the best EDGE available and stop Walker’s slide.

The race for WR1 is far from settled, but Wilson leads the three-horse race that also includes Jameson Williams and Drake London. Wilson is +100 to be the first wide receiver drafted and the favorite at +500 to be the Falcons’ selection at No. 8 overall.

Keep an eye on this spot for Willis (his O/U is either 9.5 or 10.5 and quarterback is the second-most-likely pick for Seattle according to betting odds), but Cross is the player with the best odds left on the board for the Seahawks here. Offensive line is the +175 favorite for Seattle’s pick here.

After missing out on the top two EDGEs at pick No. 4, the Jets come back at 10 and snag one in Johnson. While wide receiver was very much in play here, Johnson’s draft position over/under and the Jets’ odds to draft an EDGE in Round 1 were the tie-breakers here.

Defensive back is the co-favorite to be Washington’s first selection (along with wide receiver) and this appears to be the sweet spot for Hamilton in the betting odds.

Stingley Jr.’s draft stock has been all over the map over the last eight months or so. From a locked-in top-three pick to a mid-first-rounder to a potential top-10 pick again, it’s been a roller coaster. But given the Vikings’ need for CB help and Stingley’s O/U, he’s the favorite to go here.

Houston has plenty of holes to fill and they’ve been sniffing around potential wide receivers (like Deebo Samuel). With the top four edge rushers off the board, the betting odds don’t have a clear favorite here. So let’s add to the wide receiver corps and allow London to just go past his posted draft position.

This is another pick where mock drafters and the betting odds align. From defensive line being the favorite for Baltimore’s first pick to Davis’ O/U being 14.5, this feels like a match made in heaven.

It’s a dead heat right now between wide receiver, DL/EDGE, and defensive back for this pick (all +225). Given the chance that the Saints and/or Chargers may want to add a receiver, the Eagles pounce and another member of the Crimson Tide to their offensive lineup.

Willis’ wait is over. Quarterback is the favorite to go here and Willis is the only logical option based on the betting odds. Only the Steelers have better odds to land Willis than the Saints among teams that have not yet made a selection.

There’s been a lot of buzz this draft season around Penning and the Chargers are a fairly frequent landing spot for him in mock drafts. Given the sportsbooks’ over/under and the Chargers’ odds of taking an offensive lineman, this pick makes sense.

After taking a wide receiver first, we jump right back into filling another need with a cornerback opposite Darius Slay. McDuffie is widely considered to be CB3 and his over/under is strategically placed right in front of Philadelphia’s second pick.

Offensive tackle and wide receiver are New Orleans’ next biggest needs outside of quarterback. With Penning off the board, the Saints turn to the best pass-catcher available in Olave. Olave is a great fit and his over/under suggests this is a real possibility.

Despite signing Mitch Trubisky this offseason, drafting a quarterback is listed as the betting favorite for Round 1. If the Steelers don’t trade up for Willis, Ridder would be the consolation prize. While his over/under is currently 28.5, he’s been inching up from 32.5 and 31.5 within the last couple weeks.

A cornerback to help replace J.C. Jackson was considered here as adding a defensive back is the slight favorite at +250, there is no corner within five spots of this pick in terms of over/under. Instead, we’ll grab the No. 2 option. Lloyd is -500 to be the first linebacker drafted and the Patriots are +300 to take one. On top of all that, this is a very good fit too.

Is this finally the year the Packers draft a first-round wide receiver? Sportsbooks certainly believe so. Wide receiver is a heavy favorite to be Green Bay’s first selection. Burks has the highest over/under of any of the remaining wide receiver prospects.

Wide receiver is the slight favorite in this spot for Arizona with defensive back and DL/EDGE very close behind. While Andrew Booth Jr. was considered here, the edge—no pun intended—went to Karlaftis, whose over/under is a handful of spots earlier than this selection.

The Cowboys need to bolster their offensive line and are favored to do so. If the board somehow falls this way, I can’t see Dallas passing on Johnson.

The Bills are in need of a CB2 opposite Tre White and one falls into their lap here. Once viewed as a potential top-10 pick, Booth Jr.’s draft stock has fallen due to medical concerns. Even so, he’s still expected to be a first-round pick and the Bills are favored to take a cornerback in Round 1.

If you know what the Titans are going to do with their first-round pick… that makes one of us. The betting market views offensive line as the current favorite and with the top center still available, Linderbaum is the pick.

The Buccaneers were able to bring back Ryan Jensen and trade for Shaq Mason, but Aaron Stinnie’s spot at guard could be up for grabs. Green can slot right in and be a day-one starter for Tampa Bay, who’s favorite to take an offensive lineman in the first round.

Outside of wide receiver, which was addressed at pick No. 22, the next-highest odds land on DL/EDGE, and boy would Wyatt be a fun fit alongside Kenny Clark.

Most analysts, and sportsbooks, expect the Chiefs to add a wide receiver with one of their two first-round picks after trading away Tyreek Hill. Dotson is a speedy option and one of only two wide receivers favored to go in the first round that remain.

After wide receiver, DL/EDGE is next up on the Chiefs’ betting odds. Mafe has the highest over/under of the options. Mafe had a strong Senior Bowl and garnered first-round buzz as a result.

While offensive line is still the favorite here, given Cincinnati’s investments this offseason and the fact that seven players at the position have already come off the board, they move to their second need according to draft odds. Over 1.5 safeties going in Round 1 is a pretty heavy favorite and this is a good landing spot for Hill—the heavy favorite to be SAF2 and with an over/under just a couple spots before this selection.

The seventh wide receiver to come off the board (O6.5 is -110); the Lions continue to add much-needed help to their pass-catching room. Watson is -115 to be a top-32 pick, edging out George Pickens and Skyy Moore (both +150).