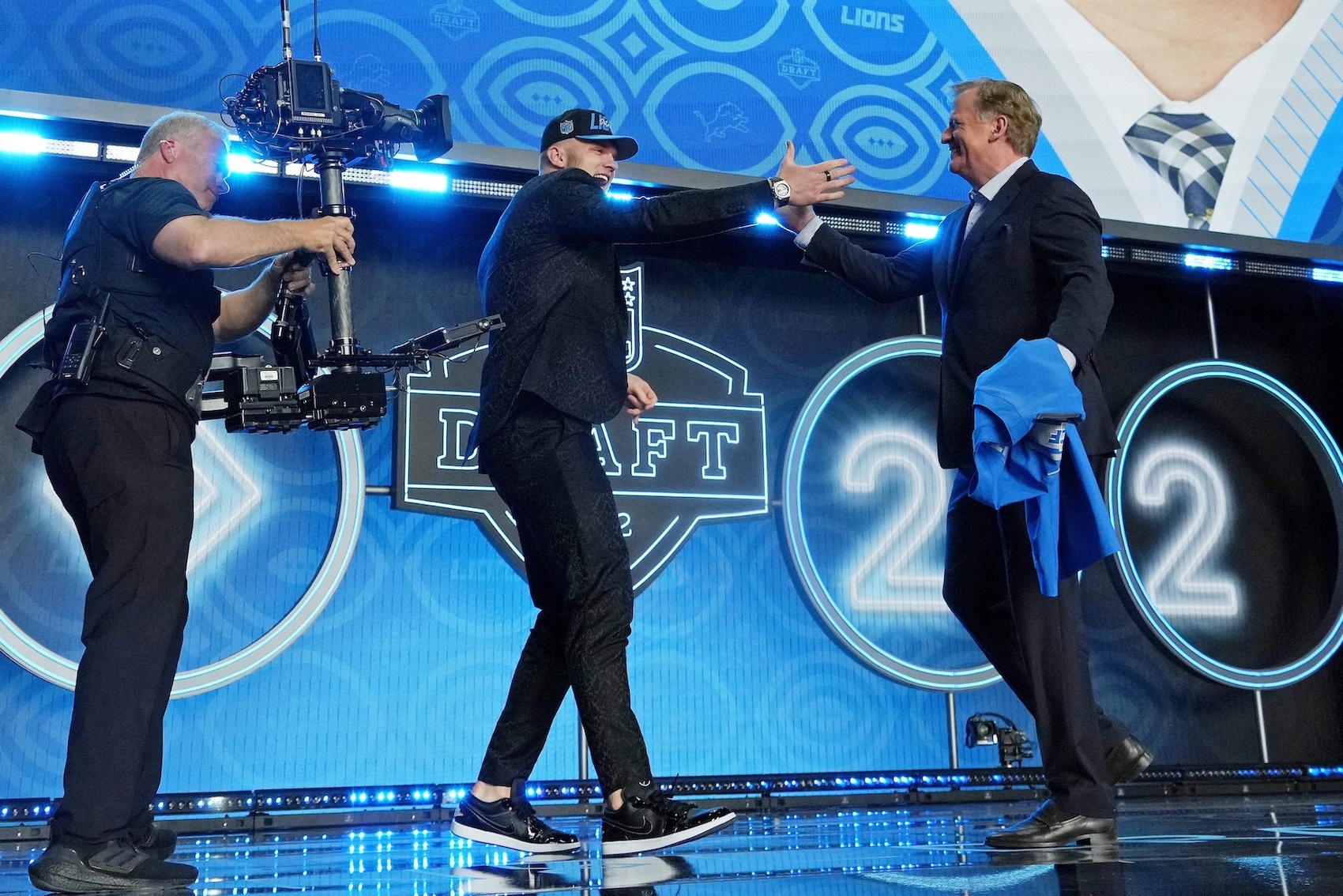 The modern-day NFL has earned a reputation for being a pass-happy, offense-driven league, but the 2022 NFL Draft threw us a curveball in comparison with what we think we know. The first five overall selections in the draft surprisingly occurred on the defensive side of the ball, as competing franchises prepare to counteract the strong offenses that have been built throughout the offseason. Our TDN team has swiftly shifted our focus to analyzing how each prospect fits with their new destination—and if they can win DROY.

With that said, the NFL futures prop betting landscape for the 2022 NFL DROY is officially starting to take shape. BetOnline doesn’t waste any time, and they’ve already updated the exciting odds. The top 10 shakes out as follows:

The landscape is certainly intriguing. The BetOnline oddsmakers certainly expect several rookie EDGE rushers to make an immediate impact, and we’re inclined to agree with that sentiment. We’ve compiled our thoughts below.

Once considered the favorite to be the No. 1 overall selection, the Lions were ecstatic to land the services of Hutchinson with the No. 2 overall selection. Hutchinson is entering an excellent situation from an immediate impact standpoint. Head coach Dan Campbell is a defensive-minded leader whose attitude and approach to the game meshes nicely with what Hutchison brings to the table.

The Lions recorded a less-than-desirable 30 sacks in 17 regular-season contests in 2021. They are heavily relying upon Hutchinson to change that. Only the Philadelphia Eagles (29) and Atlanta Falcons (18) recorded fewer quarterback takedowns throughout the course of the year.

Hutchinson’s pathway to earning an abundance of playing time is rather straightforward. Hutchinson is largely expected to start at defensive end immediately opposite Charles Harris, who led the team in sacks last season. The likes of Levi Onwuzurike, Romeo Okwara, and fellow rookie Josh Paschal are expected to play rotational roles behind the likes of Hutchinson and Harris. It represents an opportunity that should allow Hutchinson to pin his ears back and get after opposing quarterbacks on a fairly consistent basis. Hutchinson’s combination of sheer power, advanced hands, motor, and overall athletic ability could allow him to flirt with a double-digit sack season as a rookie. If he accomplishes that, he’ll almost certainly earn Defensive Rookie of the Year honors.

Many moons ago, Thibodeaux was considered the odds-on favorite to become the No. 1 overall selection in the 2022 NFL Draft. Thibodeaux then experienced a rollercoaster of a pre-draft process and the New York Giants capitalized on his slightly faltering stock by landing his pass-rushing services with the fifth overall pick. It represents a massive victory for a Giants franchise that simply needs to stack as much talent as possible.

New general manager Joe Schoen took over a Giants team that desperately needs to apply more pressure on opposing quarterbacks than it did a year ago. The 2021 iteration of the disappointing Giants recorded a pathetic 34 sacks, and Thibodeaux is largely expected to help them secure the necessary improvement moving forward.

Thibodeaux’s first-step explosiveness and quick-twitched ability make him an incredibly easy prospect to predict immediate success for. It wouldn’t be shocking to witness Thibodeaux explode for 10-plus sacks as a rookie en route to capturing the DROY award.

It qualifies as a bit disrespectful to see the No. 1 overall selection rank fourth on BetOnline’s initial list. Walker even ranks below new Baltimore Ravens safety Kyle Hamilton, who was selected with the 14th overall pick. It’s worth noting safety hasn’t won the award since former Chicago Bears legend Mark Carrier captured DROY honors way back in 1990. It’s a fact that perfectly encapsulates Walker’s underdog status.

You may want to take a chance on Walker’s favorable odds. Much like the majority of the pre-draft process, Walker is being slept on and underappreciated. Few believed in the possibility of him being the first player drafted until just days before the 2022 NFL Draft.

Walker should quickly become an immediate starter on a new-look Jaguars defensive line that is being coached by the excellent Brentson Buckner, who recently coached J.J. Watt and Chandler Jones in Arizona. Walker should take up a starting position on what could be an underrated and more productive Jaguars front four that also includes Josh Allen, new signing Arden Key, Folurunso Fatukasi, and Davon Hamilton. Jaguars General Manager Trent Baalke selected Walker over the likes of Hutchinson and Thibodeaux due to his built-in-a-lab measurements and athletic ability. It wouldn’t be shocking if Walker’s rare skill set leads to immediate production at the next level.