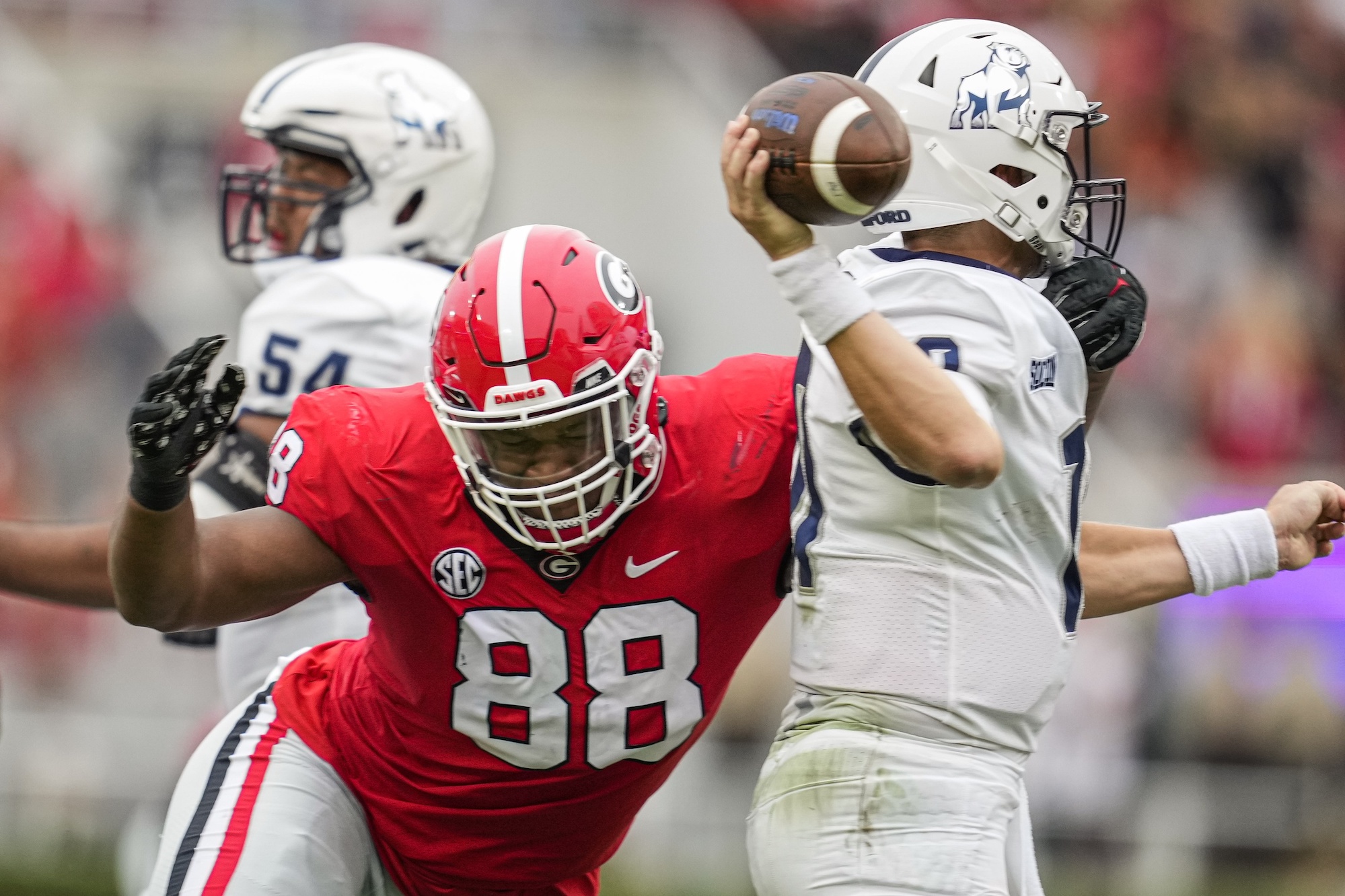 Several NFL franchises are already looking toward the offseason. Life comes at you fast throughout the harsh reality that is the NFL season. Luckily for those folks, Draft Network has you covered with our weekly NFL mock draft series. I’ve been selected to dissect our latest 2023 first-round NFL mock draft completed by Kyle Crabbs.

October’s TDN100 update has served as a reference point for both Crabbs’ mock draft and my analysis. I’ve swiftly identified my favorite selections, value picks, and best players not selected. I also have some question marks. Let’s dive into Crabbs’ latest 2023 mock draft.

There’s an excellent chance that the team selecting No. 1 overall will be a quarterback-needy one (looking at you, Carolina, Houston, or Detroit). Should the 1-4 Raiders pick this high, the most talented player in the draft may fall into the lap of general manager Dave Ziegler. Pairing Alabama’s Will Anderson Jr. with Maxx Crosby would give the Raiders one of the most dominant one-two punches at EDGE across the entire league.

Chandler Jones has been a disappointment. Through five contests, Jones has yet to record his first sack as a Raider and has totaled just 12 pressures. The pass-rushing payoff hasn’t arrived for the Raiders. Anderson could immediately step into Vegas’ starting lineup while helping Patrick Graham’s defense apply more pressure to the elite quarterbacks of the AFC West.

I can’t help but get giddy when thinking about the prospects of Jalen Carter playing next to Cameron Heyward and T.J. Watt in Pittsburgh. The Steelers appear destined for a top-10 selection and already have their quarterback of the future in Kenny Pickett. Pickett’s presence will allow general manager Omar Khan to draft the best prospect available on either side of the ball. Carter would offer that type of value.

Carter offers an impressive blend of first-step explosiveness, power, flexibility, and short-area quickness as a versatile interior defender. Carter possesses all the tools necessary to get after quarterbacks with consistency. He would thrive in Pittsburgh.

Do the Colts need another pass rusher? They’ve invested a ton into the position as of late and the likes of Kwity Paye and Dayo Odeyingbo are starting to flash the potential of reaching their ceilings. Yannick Ngakoue is playing on an expiring contract, but the Colts will possess the cap space necessary to re-sign Ngakoue, who’s a favorite of defensive coordinator Gus Bradley.

The left side of Indianapolis’ offensive line has been a disaster. Veteran journeyman Dennis Kelly is about to replace Matt Pryor and Bernhard Raimann at left tackle. To add insult to injury, Kyle sent two offensive tackles (Paris Johnson Jr. and Jaelyn Duncan) to the Chargers and Titans with the picks immediately following the Colts’ selection of Isaiah Foskey. Adding a blindside protector that’s capable of contributing in Year One will be a priority for the Colts.

The Titans may be moving on from starting left tackle Taylor Lewan. The oft-injured Lewan just suffered his second season-ending knee injury. The Titans can save nearly $15 million toward their 2023 cap by releasing Lewan. Drafting Jaelyn Duncan would provide the Titans with somewhat of a like-for-like replacement for Lewan as their new blindside protector. Pairing Duncan with Nicholas Petit-Frere means the Titans would finally have their bookends of the future.

Duncan is an ideal scheme fit in Tennessee. Duncan’s athletic ability makes him a high-quality candidate to thrive in the outside zone system that’s still preferred by offensive coordinator Todd Downing and offensive line coach Keith Carter. Duncan’s ability to reach the second level would create some much-needed room for Derrick Henry to operate.

The spiciest pick of Kyle’s mock also happens to provide the best first-round value. The Cowboys drafting Texas running back Bijan Robinson in the first round would be a game-changer. Don’t rule out the possibility. Tony Pollard is set to reach free agency and may be searching for more dollars and opportunities elsewhere. Releasing Ezekiel Elliott would provide the Cowboys with an abundance of financial relief. Running backs matter to Dallas’ decision-makers, and Robinson is an elite ball-carrying prospect.

The No. 3 overall player in October’s TDN100 update, landing Robinson with the No. 26 overall selection would represent fantastic value for the Cowboys regardless of positional debate. Robinson would thrive in Dallas while staying in the great state of Texas.

Hall: Hall is currently our highest-ranked prospect (No. 24) that doesn’t appear in Kyle’s latest mock. Hall is a powerful edge defender that generates terrific torque when rushing the quarterback. Hall is currently enjoying a fruitful campaign, recording 4.0 sacks, 7.0 tackles for loss, one interception, and one forced fumble through Auburn’s first seven contests. Hall should flirt with double-digit sack totals for the second consecutive season after recording 9.0 quarterback takedowns last season. Hall could end up being a first-round selection.

Johnston: Johnston’s slow start to the season had scouts understandably questioning his status as a potential first-round selection. Johnston has reintroduced himself to the masses as of late by recording an astounding 22 receptions for 306 receiving yards and two touchdowns in back-to-back victories over Oklahoma State and Kansas. It represents quite the turn of events after Johnston caught just 12 balls in TCU’s opening four contests. Johnston is officially back on track and could be viewed as a difference-maker in today’s pass-happy league.