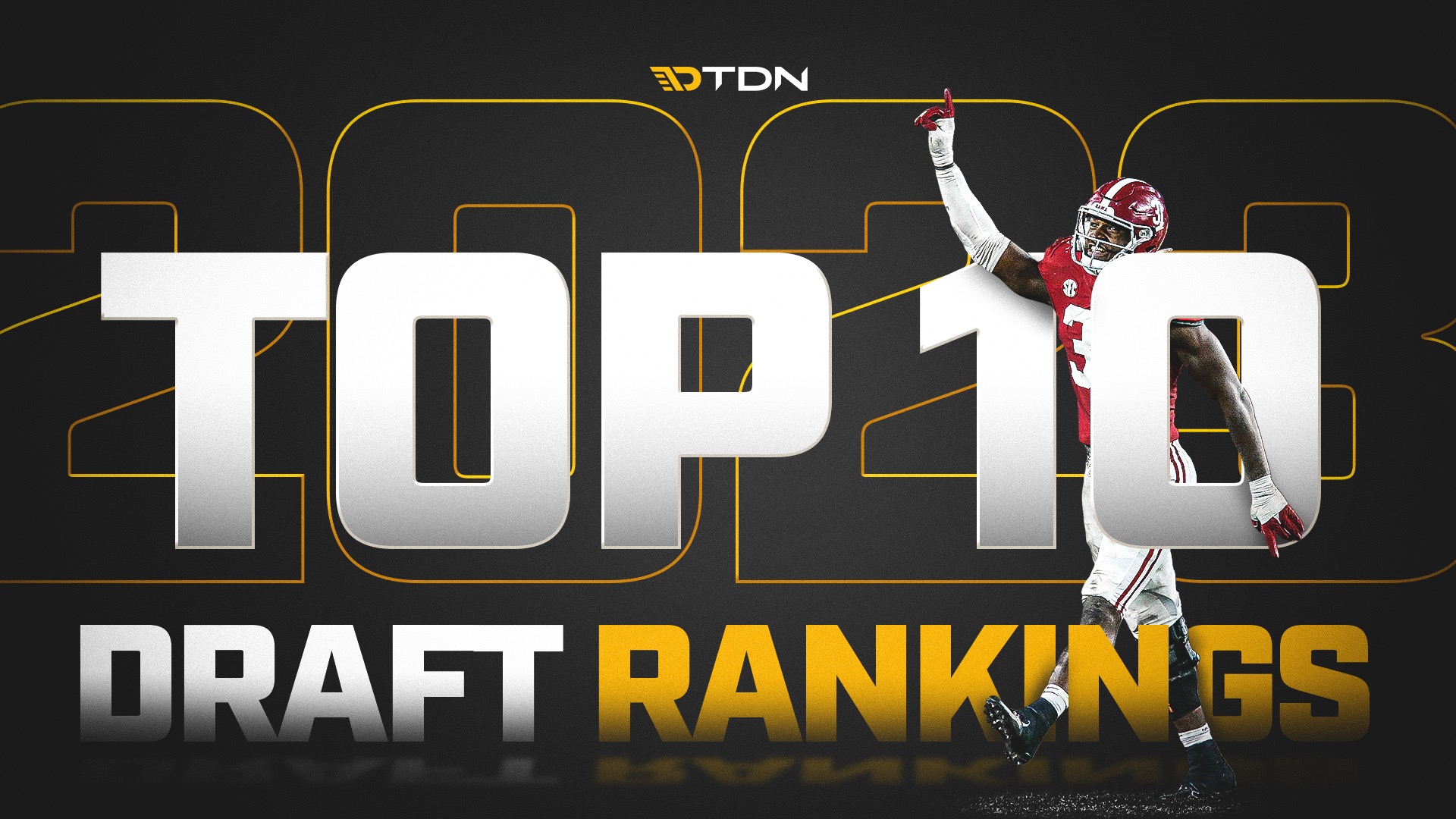 Who makes the early cut for the 10-best prospects in the 2023 NFL Draft? Let’s find out.

Will Anderson Jr. enters the 2022 college football season on a torrid pace as a pass rusher and overall defender. The returning Nagurski Trophy winner was a unanimous First Team All-American and was, generally, unstoppable. Anderson isn’t listed with ideal mass but he’s got prototypical length, a slew of hand counters, and a tireless motor. It is hard to envision Anderson Jr. not finishing the season as the top-rated defender for the class of 2023.

Stroud’s season got off to a rocky start as the successor to Justin Fields but it did not take him long to find his footing. Stroud shredded Big Ten defenses while throwing to two top-15 draft selections in Chris Olave and Garrett Wilson—but the loss of weapons shouldn’t deter you from buying in on an encore season in 2022.

Stroud told TDN at Steve Clarkson’s QB Retreat in May that he’s expecting more of the same from himself and the Ohio State offense despite the losses on the depth chart to the NFL. If that indeed plays out as planned, Stroud will have the best blend of production and physical tools of any quarterback eligible for the 2023 draft across a two-year sample size. That makes him our early pick for QB1.

Remember when the Georgia Bulldogs broke through and won the Natty thanks in large part to five defensive first-round picks from the 2022 NFL Draft? (Walker, Davis, Walker, Wyatt, and Cine, for those counting at home.)

Now pause for a minute and appreciate that Georgia has a top-three prospect *ON DEFENSE* for 2023 as of this summer, too. Carter didn’t roll up crazy numbers in Georgia’s defensive line rotation but he was super disruptive and should be a starring player in the Georgia front this upcoming season. With his quickness, lateral mobility, contact balance, and hand power, there is a lot to like.

Speaking of remembering the 2022 NFL Draft, the Jacksonville Jaguars made a high-tools defensive lineman the No. 1 overall pick with Travon Walker. Murphy has a lot of the same qualities going for him as a player, but he has had more production over the last two years than Walker has to boot. Now, I’m not sure how many seasons Walker would go No. 1 overall, and that’s part of why Murphy is ranked No. 4 for us at this point. But he has the ability to line up on the edge or inside with his mass and has shown a blossoming feel for collapsing pass sets and creating disruption in the pocket.

Pour one out for the LSU Tigers, who lost Ricks in the transfer portal to their SEC rivals in Tuscaloosa. Not great. Ricks is a ballhawk with length—a blend of skills that NFL teams usually don’t wait too long to draft each spring. Shoulder surgery ended his 2021 season prematurely and then Ricks was arrested this spring after a traffic stop; so he’s had a bumpy stretch as he’s transitioned from LSU to Alabama. But if he can avoid any further setbacks, Ricks has the physical tools to be a top-flight cornerback prospect.

Please don’t take this as disrespect to everyone’s favorite 2023 wideout Jaxon Smith-Njigba—who just missed this list—but Boutte has the physical skill set to separate himself as of this point in time in our opinion. With a reported 4.37s 40-time in his ledger, Boutte has flashed that open field speed plenty of times and has some tremendous production to his name to boot. He averages 15 yards per catch and has logged 1,244 yards and 14 touchdowns in 16 career games (77.8 yards and 0.88 TD per game) with Max Johnson, TJ Finley, Myles Brennan, Garrett Nussmeier, and Jontre Kirklin chucking him the football. We’re hoping to see him press closer to the ceiling his physical skill set suggests he’s capable of in 2022.

Bresee went down with a torn ACL during the Clemson Tigers’ 2021 loss to the NC State Wolfpack, a blow that took some of the wind out of the sails for a Clemson team who clung to their defense all season long to help them win games. The No. 1 overall recruit from the Class of 2020, Bresee hit the ground running for Clemson as a true freshman and offered firm lateral play, effective pass rushes, and penetration ability against the run from his alignment inside. If he’s back to full health in 2022, Bresee will pair with Murphy and several others in the Clemson front to produce one of the most fearsome front sevens in all of college football. That should facilitate plenty of one-on-one matchups to win.

Look out for Robinson this season now that Steve Sarkisian has had another year to gel his offense in Austin and Robinson is fully recovered from an elbow injury that prematurely ended his 2021 season. Robinson can do it all, both in terms of reps on the field and physically as a weapon. It is awesome to watch Robinson, a 220-pound back, explosively run through tackles on one play and then come back and make a hard, dynamic lateral cut on the next that illustrates rare body control and movement ability.

The NFL is a more you can do league, so Johnson Jr. logging snaps over the past few years at guard is only going to help his resume. This was once upon a time a prized tackle recruit who has lived inside at guard. Johnson Jr. himself is quoted as saying he’d have preferred to play tackle this past season, too. But that’s water under the bridge and now Johnson Jr. has a home at left tackle, where expectations are high. He’s got all the tools to quickly dismiss those reps inside and showcase as a spotlighted player on the edge.

Oh, you know. Just a casual 4,872 passing yards and a Heisman Trophy to his name before he was even draft eligible. The question for Young, however, is going to be rooted in his stature. Players with physical limitations have to style their play to cater to what they do best—and for Young that includes a snappy release, strong pre-snap anticipation, and deadly accuracy. He’s got those things, so that’s a great launch point for a draft resume. But how well can he continue to play within structure from the pocket? That’s the area of Young’s game we’re watching closest as he enters 2022.