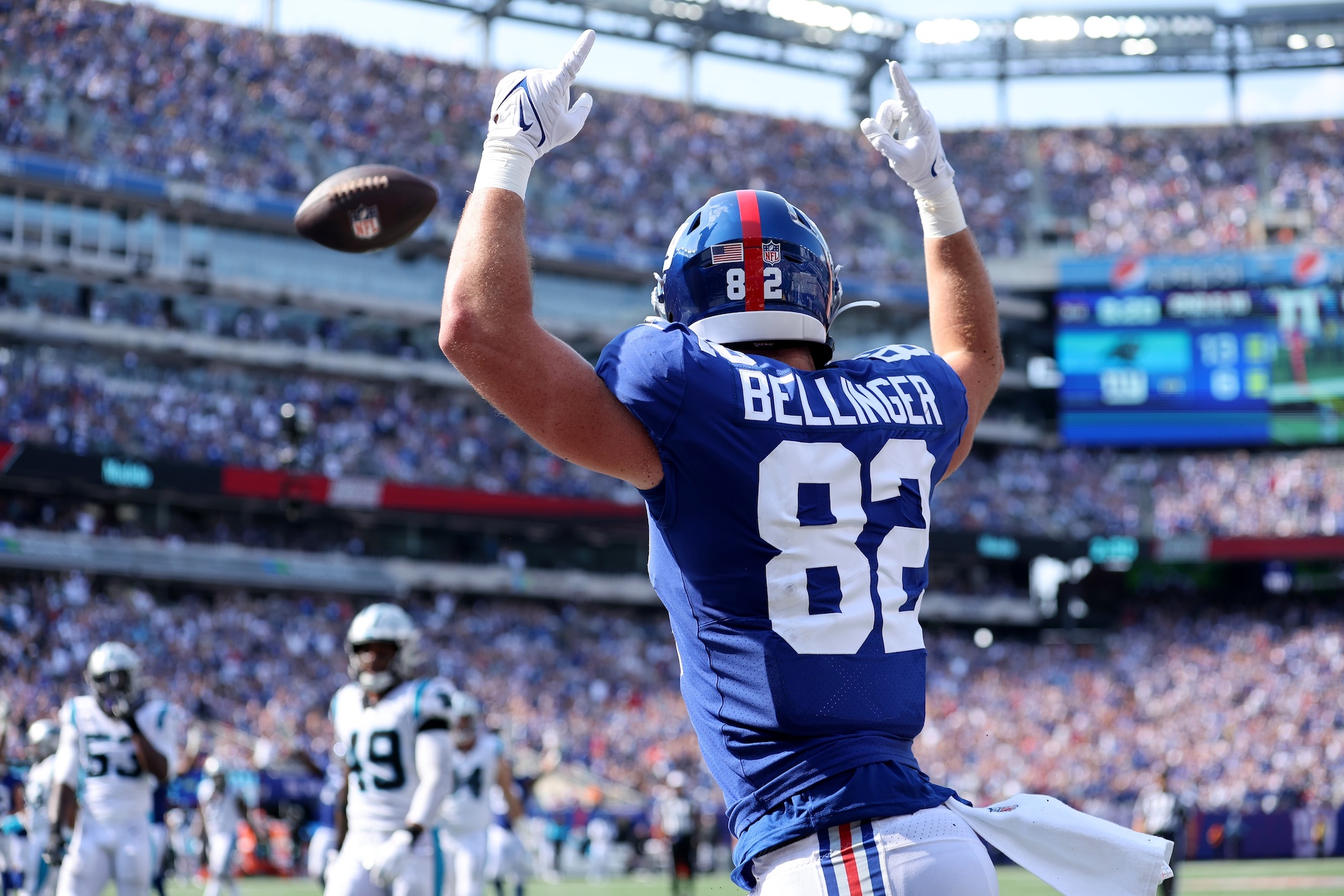 One of the best parts of the NFL draft process is seeing which rookies and certain position groups start to shine as all of these young players’ first seasons begin. For the 2022 NFL Draft, one of the position groups flashing the most rookie talent early is the tight end class.

Off the bat, that may come as a bit of a surprise. Tight end is notorious for being one of the positions that take the longest to develop because of the responsibilities they have as both an extra blocker and extra receiver. What’s even more surprising about this year in particular being good for rookie tight ends is the fact that no tight ends were taken in the first round and only three were drafted on day two. Ironically, the sole tight end taken in the second round, Arizona Cardinals rookie Trey McBride, might be the guy who has contributed the least.

Let’s take a look at all of the rookie tight ends who are already making a solid impact for each of their teams in the order they were drafted.

There isn’t a lot to say here. McBride was always a surprising pick for Arizona, a team that had just extended tight end Zach Ertz to begin the offseason and had needs elsewhere. So perhaps it isn’t too surprising that the rookie has done very little in his first six weeks of NFL action. He’s seen just 75 offensive snaps (19%) all season, with most of his time on the field coming in special teams action.

Through one-third of his first season, McBride has just three catches on three targets for 24 yards. All of his production came in a single game, Week 4 against the Panthers.

Like the Cardinals with McBride, the Colts’ selection of Woods was also a bit surprising. They, too, had just extended their in-house tight end, Mo Alie-Cox, early in the offseason, which was one reason Woods was a surprising pick. Another reason was that it felt like a bit of a reach. Woods is toolsy as a very large (6-foot-7, 253 pounds) human being, but he had only switched to the tight end position a few years earlier and as a result, was still raw enough to be projected as more of a day-three option in his class.

Unlike McBride, Woods has been an early contributor to his team’s offense. It isn’t that he’s seeing significantly more snaps—he’s been on the field for just 23% of offensive snaps—but his size has made him the perfect goal-line target as an automatic mismatch. That’s exactly how the Colts have been using him. Woods has five career catches so far. Three of them have been for touchdowns, all giving his team the lead. The other two have gotten Indianapolis a first down.

For the Colts, it’s been simple. Sure he’s raw, but guys with that stature don’t grow on trees, and they’re taking full advantage of having him when it matters most. Once Woods eventually improves his route-running and blocking skills, expect to see him on the field much more in the years to come. But for now, Indianapolis is happy having an absolute touchdown machine.

This pick was less of a surprise. In acquiring quarterback Russell Wilson, the Broncos had given up not just quarterback Drew Lock, but promising young tight end Noah Fant as well. Dulcich, widely regarded as one of the best athletes at the position in his draft class, would be a solid eventual replacement and good immediate depth at the position for Denver.

Unfortunately for Dulcich and his team, the rookie missed the first five weeks of the season on injured reserve with a hamstring injury. The good news for him and the Broncos is that he was an immediate contributor in his return.

In his first game back, Dulcich took over a majority of the offensive snaps from incumbent Albert Okwuegbunam, staying on the field for 71% of Denver’s offensive plays. That translated into a healthy amount of production for his first NFL game, seeing three targets and catching two for 44 yards and his first career touchdown.

YOU ABSOLUTELY LOVE TO SEE IT.

The upside is high on someone like Dulcich, who excels as a good route-runner with nice hands and strong ball skills. The Broncos have needed someone who can inject extra life into their offense this season and Dulcich could be that guy going forward.

Now we’re getting to the real value picks—the day-three guys. Otton was the first guy off of the board on the third day of this year’s draft and he’s been one of the most productive tight ends in this rookie class so far.

On a team that already had Cameron Brate and Kyle Rudolph, Otton is starting to establish himself as the best of the bunch. He trails Brate (13 receptions and 114 yards) with just one fewer reception and 15 fewer yards despite seeing fewer targets as well. Otton’s offensive snap count has steadily risen—with a high of 94%—all season and he is well on his way to establishing himself as TE1 in Tampa.

Bellinger may be the biggest surprise contributor on this list. He came to a team that had just added young receiving talent over the past two years, including a receiver drafted just the day before the rookie tight end. His best attribute wasn’t his route-running, hands, ball skills, or run-after-catch ability. It was his blocking. And yet, Bellinger is third on the Giants with his 15 catches.

Talk about another guy who has stepped up for his team in a time of need. Projections for Ferguson were murky ahead of this season as a rookie coming to a team that already had a tight end, Dalton Schultz, playing on the franchise tag and potentially getting an extension. Well, Schultz has been banged up a few times this season and missed a couple of games. Ferguson stepped right up and delivered, with his best performance coming on Sunday night with a four-catch, 40-yard performance against the Eagles that also featured his first career touchdown and a very impressive Euro step to get the ball in the end zone.

How much he’ll continue to contribute once Schultz (and quarterback Dak Prescott) are back is unclear, but Ferguson is definitely going to force a tight end controversy in Dallas if he keeps playing the way he has in their absence.

Those are all of the guys that I see as having made big contributions to their team so far this season, with the exception of McBride, who I included as TE1 in his class. That isn’t to say there aren’t more rookie tight ends balling out. Tennessee Titans rookie Chigoziem Okonkwo had a great game in Week 4 against the Colts but has since quieted down. Baltimore Ravens rookie Isaiah Likely has been solid too but is fighting for snaps and targets with Mark Andrews and hasn’t been as productive as a result. Finally, Washington Commanders tight end Cole Turner deserves a shout-out for his breakout game on Thursday in Chicago and could soon end up being a big-time contributor for that offense with more starts like the one he just had. Pittsburgh Steelers rookie Connor Heyward has also done a nice job filling in for the injured Pat Freiermuth.

This NFL rookie class of tight ends has been so promising, and with more action and a bigger sample size from all of those guys going forward, they’ll have a chance to make this tight end class look truly star-studded when we look back with hindsight.