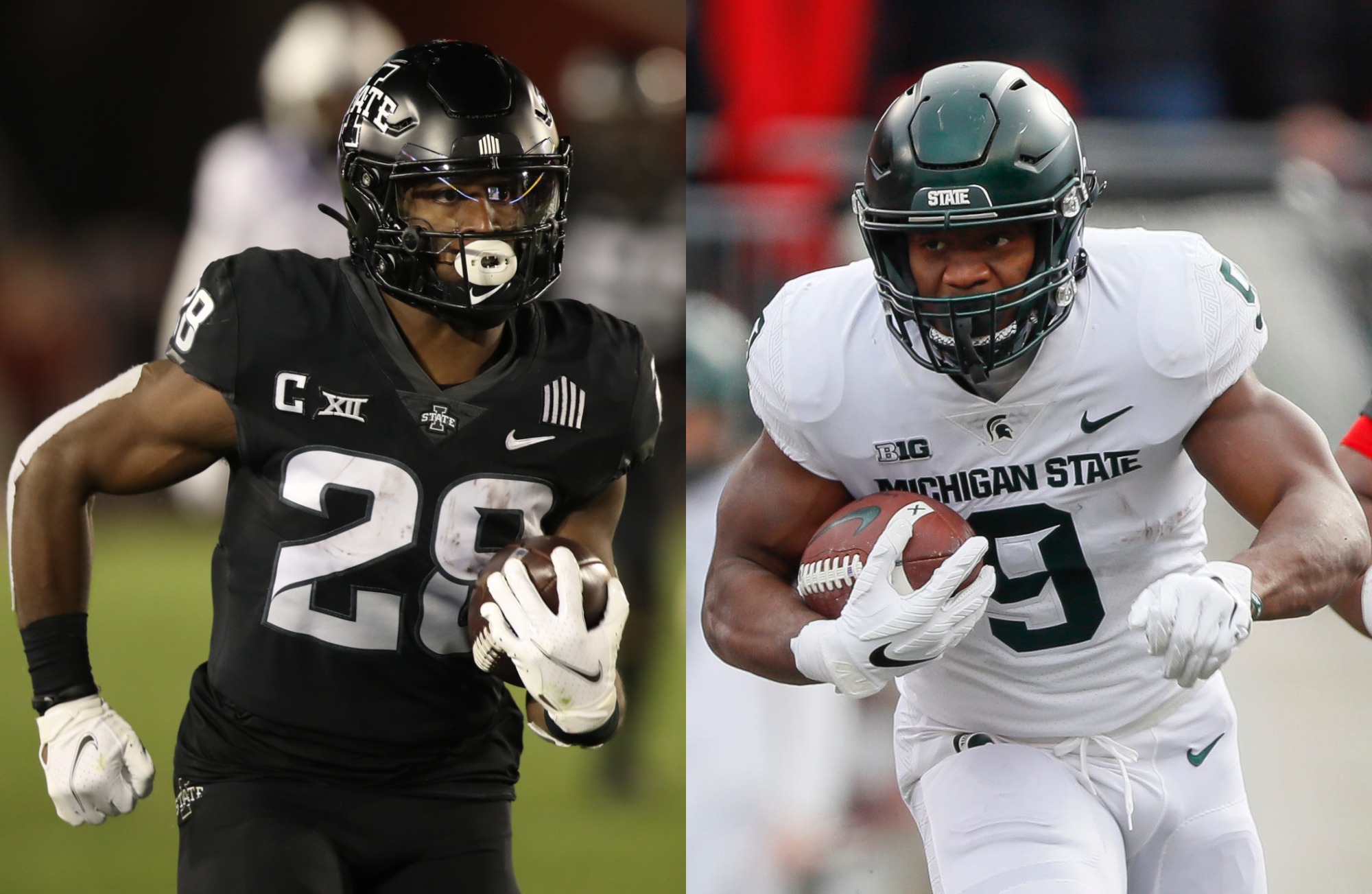 The 2022 NFL Draft is loaded with quality running back prospects. Iowa State’s Breece Hall, Michigan State’s Kenneth Walker III, and Texas A&M’s Isaiah Spiller are viewed as high-end ball-carriers that carry the potential to make an immediate impact at the professional level.

The running back position is becoming more valuable in a league that places emphasis on rostering running backs that can impact the passing game by running routes out of the backfield while creating mismatches against opposing safeties and linebackers. All three of Hall, Walker, and Spiller are proficient in this underrated aspect of the game, and it increases their chances of being first-round selections at the end of this month.

A bellcow, three-down running back can still help transform and transcend an NFL offense (look no further than Najee Harris). Several NFL franchises would benefit from adding such a player to their roster. Hall, Walker, and Spiller possess that type of talent. We’ve identified three teams that may consider drafting a running back in the first round of the 2022 NFL Draft.

The Buccaneers have experienced quite the rollercoaster of an offseason that has consistently captured the headlines. Tom Brady’s short-lived retirement momentarily catapulted the Buccaneers into searching for a new quarterback, but Brady’s timely return saved general manager Jason Licht from having to travel down that tumultuous and unpredictable road. Just weeks after Brady returned to the fold, head coach Bruce Arians announced his retirement from coaching, and former defensive coordinator Todd Bowles was swiftly promoted to the lead job.

Bowles could reportedly make changes to the Buccaneers’ offense by taking more of a run-heavy approach going forward. Standout running back Leonard Fournette happily returns to the Bucs via a three-year contract worth $21 million, but Tampa Bay could still be in the market for a difference-maker at the position. The disappointing Ronald Jones II departed the franchise earlier this offseason by signing a one-year prove-it deal with the Kansas City Chiefs. Jones’ tenure in Tampa never lived up to its expectations, and Licht could take another swing at finding a more appropriate partner for Fournette in Tampa’s busy backfield. Pairing Playoff Lenny with a running back that’s better suited to handle third-down pass-catching duties near the back end of the first round makes sense for a roster that truthfully has few holes and needs.

Andy Reid’s Chiefs are going to operate their offense in a significantly different manner in 2022 than they did in previous seasons. In what qualified as a shocking offseason development, the Chiefs traded wide receiver Tyreek Hill to the Miami Dolphins in exchange for several immediate and future draft selections following a contract dispute. Hill landed his desired contract in Miami, and the Chiefs are now left without a bonafide WR1.

The Chiefs still possess Patrick Mahomes and Travis Kelce, and will field an extremely dangerous and high-scoring offense in 2022. The offseason additions of JuJu Smith-Schuster and Marques Valdes-Scantling will help the Chiefs replace Hill by committee, as finding a like-for-like replacement for Hill is unrealistic. As they continue to overhaul their offensive approach, you shouldn’t rule out more touches for their backfield players, both via carries and in the passing game.

The Chiefs own a pair of first-round selections in the upcoming draft, which are currently scheduled to be of the back-to-back variety (No. 29 and 30 overall). The Chiefs could draft a receiver with one of those selections and we wouldn’t rule out them targeting a ball-carrier that can impact the passing game as well as they continue to prepare for life after Hill.

The Texans aren’t going to select a running back with their currently scheduled first-round selections (No. 3 and 13 overall), but they’re loaded with second- and third-round picks over the next few drafts, partially as a result of the blockbuster trade that sent Deshaun Watson to the Cleveland Browns. General manager Nick Caserio possesses the draft capital necessary to move up and down the board however he sees fit.

Caserio and the Texans could be tempted to move back into the first round in the 27-32 range should a running back that peaks their interest remain available.

The Texans averaged a league-low 83.6 rushing yards per contest in 17 abysmal regular-season contests last season. Houston’s inability to run the football at their desired rate will be an area new head coach Lovie Smith and offensive coordinator Pep Hamilton want to change going forward. Veteran ball-carrier Rex Burkhead returns to the fray in 2022 and Caserio signed Marlon Mack to a one-year prove-it deal, but the Texans undeniably need more talent and production in their backfield.

Houston will almost certainly draft a running back at some point, and we can’t completely rule out the possibility of them trading back into the first round in order to secure the services of their desired target.