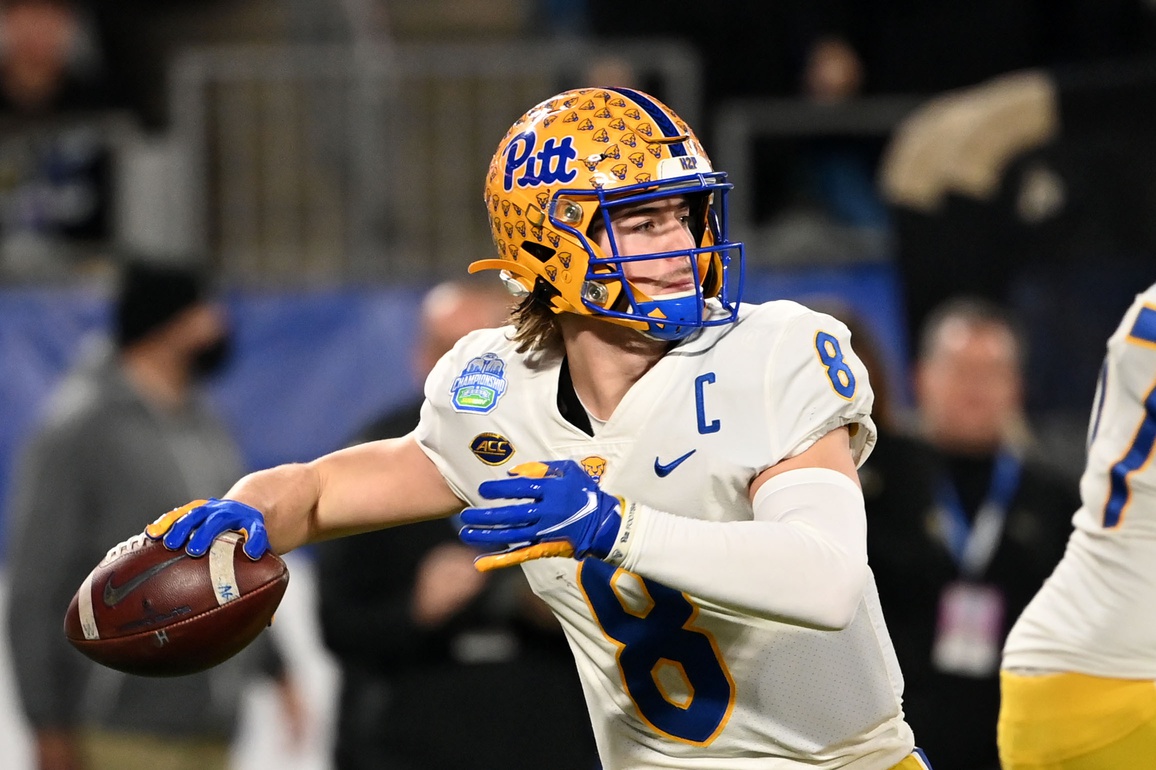 2022 is a year when hardly anyone’s mock draft looks the same when it comes to the quarterback position. Several names have been pinned to the potential first-off-the-board spot and it’s anyone’s guess as to just who that will actually be—though former Pittsburgh quarterback Kenny Pickett to the Washington Commanders at No. 11 overall is one of the most popular projections currently out there. But the debate doesn’t stop at who should be the first passer selected in the 2022 NFL Draft. There is also a lot of disagreement surrounding how many quarterbacks will go in the first round—those projections range mostly between two and five. But, who truly deserves to be chosen in the first round? Here’s a look into which signal-callers have shown that they should be a day-one pick and have a very real chance of being one based on team needs and how they match.

It truly is a curious case here how Carson Strong was a top-15 pick across several mock drafts, listed as the No. 1 overall pick in many of those, ahead of the season. And despite remaining consistent throughout the season and distinguishing himself as the best pure passer with unparalleled deep ball placement as far as this class goes, he dropped to a day-two pick in many projections. This comes down to rumors of a degenerative knee that seem false and unsubstantiated at this point, considering that Strong has been cleared by a Los Angeles Rams doctor. Expect his stock to continue to go up as more positive information surrounding the knee comes out ahead of the draft—while some of it is probably just teams doing their due diligence, Strong did tell me he’s had good meetings with the Washington Commanders, New Orleans Saints, Tennessee Titans, Pittsburgh Steelers, and Philadelphia Eagles—a sign that could point to him being taken early on. If Strong lands in a situation like Mac Jones—a place that operates an offense that allows a pure pocket passer to succeed—he could rise quickly.

This is your 2021 meteoric riser. Kenny Pickett didn’t do anything to raise or hurt his draft stock at the Senior Bowl, rather maintaining a high level of consistency and further showing he has the highest floor among quarterbacks in this draft. Pickett is average or above-average in every aspect of quarterbacking, which makes him a good fit for any scheme in the NFL—he has a larger range of landing spots than any other quarterback in the draft as well. There’s a lot to be excited about here with the similarities in playing style and rise to Cincinnati Bengals quarterback Joe Burrow, though Burrow is obviously more advanced. If Pickett stays on that trajectory as he makes the transition, he could develop into something special, though he should quickly become one of the best backups in the league even if he’s asked to sit for a season or two. If he’s asked to start in his rookie season, he brings a solid toolbox to give a team a fighting chance.

There hasn’t been as much talk about Matt Corral lately because he’s been overshadowed by the news and analysis coming out between the Senior Bowl and the Shrine Bowl—neither of which he could participate in because of eligibility criteria. Corral has impressed both through the air and on the ground within Lane Kiffin’s RPO-based offense, but it’s been easy to get the sense that he’ll need to be in an offense with a lot of RPOs at the next level to make a solid transition. Corral is underwhelming from a traits perspective and projects as a game-manager with the accuracy and ability he’s shown to command this offense, in addition to being commended for his intangibles and ability to rally his teammates—something that’s really shone through.

Does Malik Willis truly deserve to be considered a first-round talent? He looked like he did at the Senior Bowl outside of the first day and he’s got a solid case for best quarterback in the class. He brings everything to be desired in terms of athleticism and improvisation, but he has had some extreme inconsistencies throughout the season as a pure passer—and taking care of the football was not his best trait when he threw three interceptions in three separate games against subpar secondaries. At the end of the day, he fits well with what’s looked for in quarterbacks in the modern era of the NFL, and if his improvement as a passer is for real and he can keep it up in the NFL, he deserves his props. Willis has the highest ceiling and the lowest floor in this class and has been mocked several times to the Carolina Panthers and Washington, places that could both be plausible fits.