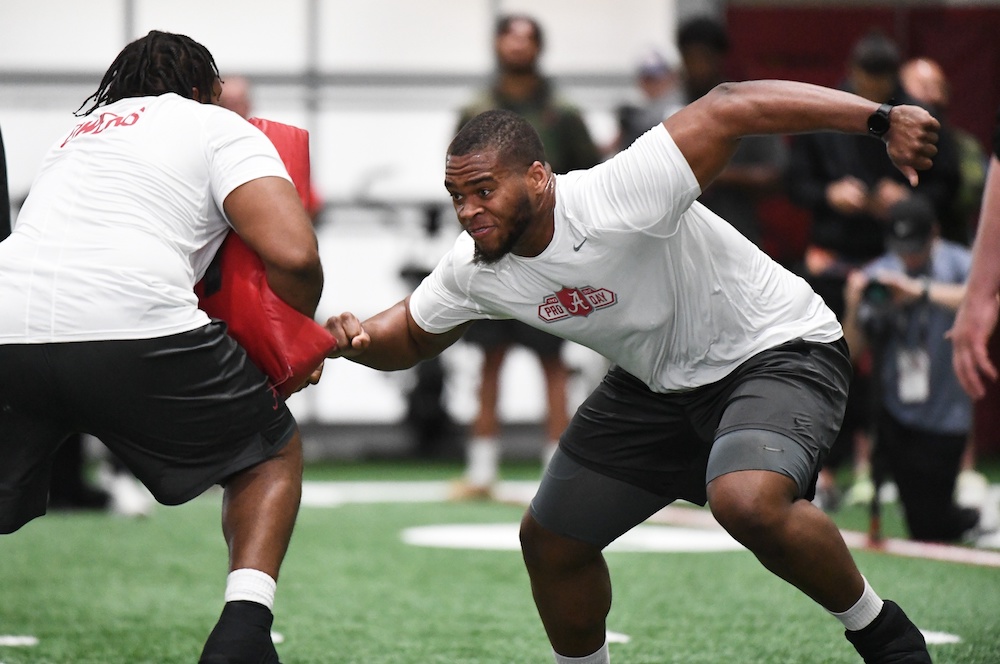 Draft fatigue is a funny phenomenon that tends to happen around this time in the draft cycle. We’re about two and a half weeks away from the 2022 NFL Draft, but ironically, as we get closer and closer to draft night, some of the best players seem to be slipping down boards.

Some players have skyrocketed up draft boards as their pre-draft process continues and hype around their name grows. That naturally means some of the other names towards the top must fall.

It’s not any fault of the prospects that were already near the top. They’re very good players, and their pre-draft processes might have been even better than those of the meteoric risers.

Even so, some media (and even some teams) might be eager to jump on the hype train for other players, guys that they haven’t yet grown weary of talking about. Either that or some of the highly touted prospects’ draft stocks decrease with more momentum for a team near the top taking other players. That, in turn, pushes them down draft boards so that they can fill the needs of another team needing someone at the position.

A couple of the clearest examples of players affected by that draft fatigue are two of the top offensive tackle prospects in this year’s draft class. Evan Neal and Charles Cross have both been in the conversation as top three offensive tackles in this draft for a while. Neal was even perceived as a near-lock for the number one overall pick around the time of the NFL Scouting Combine. Less than a month out from the draft, both players’ projections have changed.

For Neal, a big part of that was the Jaguars’ decision to place their franchise tag on offensive tackle Cam Robinson for a second consecutive season. That took offensive tackle off the list of potential team needs Jacksonville might bolster with the first overall pick. As a result, momentum has started to build toward the Jaguars drafting an edge rusher—like Aidan Hutchinson—instead of a top tackle like Neal.

Cross has suffered a similar fate in his draft board projections, especially paired with the rise of another tackle prospect. After a stellar 2021 season on tape, there was an expectation that he would be the number three tackle off the board in the 2022 draft class. He hadn’t quite performed up to the standard of Neal and NC State’s Ikem Ekwonu, but he was still often getting mocked to the Panthers as OT3 with the sixth overall pick.

That has since changed, as momentum seems to be building more each week for Carolina to draft a quarterback—particularly Kenny Pickett—with that pick. Neal’s fall has affected Cross too, since other tackle-needy teams in the top 10 may now have a better shot at drafting the Alabama star or Ekwonu ahead of Cross.

At the same time, Northern Iowa standout Trevor Penning has been rising quickly up draft boards after a stellar showing at the Combine in March. With Penning making a run for third offensive tackle, Neal potentially falling and Pickett a likely choice for Carolina with the sixth pick, Cross may fall out of the top three tackle conversation and to the bottom of the overall top 10–or even lower.

As we get closer and closer to the first night of the draft in Las Vegas, more players may experience the same thing. Other players will gain hype and rise while some perceived team needs will get filled in free agency, and some of the guys who have been near the top of draft boards all along might drop.

While that could lead to some teams overthinking after having spent so much time evaluating a few players, many will still stick to their guns and draft top talent. Neal and Cross are still two outstanding prospects, regardless of the players rising around them and their relative lack of recent hype in comparison.

Neal could still be on the Jaguars’ mind for that first pick even after the Robinson franchise tag, and Cross is absolutely still worthy of a top 10 pick. Just because they haven’t gotten as much recent buzz, that doesn’t make them any less valuable to a team that needs elite talent early in the draft. Expect teams to keep that in mind and draft both tackles—and any other elite players who end up victims of draft fatigue—early.