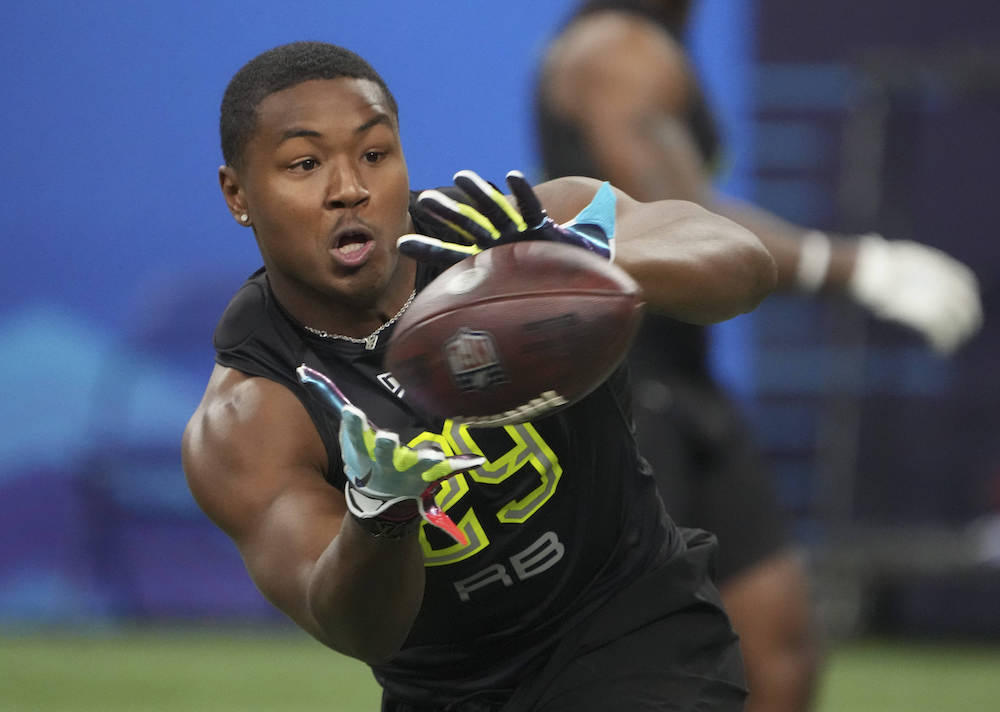 With the 2021-22 season now in the rearview mirror, the eyes of the NFL will now attempt to fixate its focus on the upcoming scouting combine, draft, and its pool of impact athletes. Rest assured, we here at The Draft Network have you covered from all angles. While the All-Star showcase circuit offered a further glimpse into some of the elite skill sets primed to enter the NFL fold in the coming months, in this article we’ll play GM mode, constructing an offense solely based on eligible prospects in this year’s class. Let’s jump right in.

The toolsiest of all quarterbacks in the class, Malik Willis is QB1. While many will argue that Pittsburgh’s Kenny Pickett represents the most “pro-ready” talent of any signal-caller, if you want a quarterback with the fundamental traits that could lead you to a Super Bowl, Willis has the ingredients and performance ceiling to do so if all comes to fruition.

A true three-down threat, while Isaiah Spiller lacks the top-end get-up-and-go to blow past the third level of the defense, he’s a well-refined prospect who will show pop on both the ground and through the air. At 215 pounds, his weight is distributed nicely, which allows him to play with low pads and through contact, but not too heavy to take away from his flexibility and wiggle between the tackles.

A modern-day flex option, Isaiah Likely will shine at the combine and should see his stock continue to rise after an impressive season for the Chanticleers and a standout performance at the Senior Bowl. A seam-stretcher with excellent YAC ability and enough sand in his pants to move bodies in the run game, Likely separated himself from the class with his performance in Mobile.

A mauling athlete whose feathery feet allow him to do it all on the edge, Ikem Ekwonu will immediately become one of the premier run blockers at the next level. That’s not to say his ability in establishing an anchor in the pass game is substandard, but his dominance as a vertical mover in the ground game showcased some of the most impressive tape of any player this fall.

A scheme-versatile talent who also has experience at tackle, Kenyon Green is a wall to get around with tree trunks for a lower half. With heavy hands and an elite ability to identify stunts and twists from the opposing defensive line, Green is a polished player who will make his impact felt right away.

One of my favorite pound-for-pound prospects in the entire class, after seeing the impact Creed Humphrey had for Kansas City this fall, wherever Tyler Linderbaum falls, I expect him to have a similar or greater impact. A talent with the potential to become a multi-year All-Pro selection, he checks every box.

A dancing bear who will run through your chest plate, Zion Johnson’s film was teach tape all campaign long. An exquisitely detailed prospect whose hands, hips, and feet resemble a fluid ensemble of moving parts, while he isn’t the sexiest of prospects, he will enjoy a decade-plus long career in the NFL.

An elite athlete whose ability to counter speed rushers and inside/outside spin moves constantly flashed on film, projecting Charles Cross to an NFL offense will allow teams to further open their playbook. A quick-twitch athlete with an explosive first step in his pass set that rarely finds him out of position, his versatility and range as an offensive tackle is silly. Combine his elite profile with a hunger to staple defenders to the dirt, while Evan Neal is a fine prospect himself, give me the higher ceiling player in Cross to shore up the edge of my front five.

Injury aside, and as we saw with Jaylen Waddle’s impact for the Dolphins this fall, Jameson Williams should immediately become WR1 wherever he calls home. The most electric wideout in the class, Williams stands alone atop the wide receiver pecking order.

A do-it-all talent that will garner a boatload of touches in his career, there isn’t anything Treylon Burks can’t do. A rocked-up prospect who will be able to handle the physicality that will come with the ball being placed in his hands so often, he’s the ultimate chess piece. A space-eater at all three levels, as unique a YAC threat that Burks is, his oily route-running and sure hands presents a well-rounded prospect that will immediately become the target hog of a pro offense.

The smoothest wideout in the class, at times, it looks like Chris Olave is moving in slow motion due to his pro-ready route-running ability. A mainstay on nightly highlight reels for his stop-start and cutting ability that routinely embarrassed opposing corners, Olave will have no issue creating separation on Sundays.