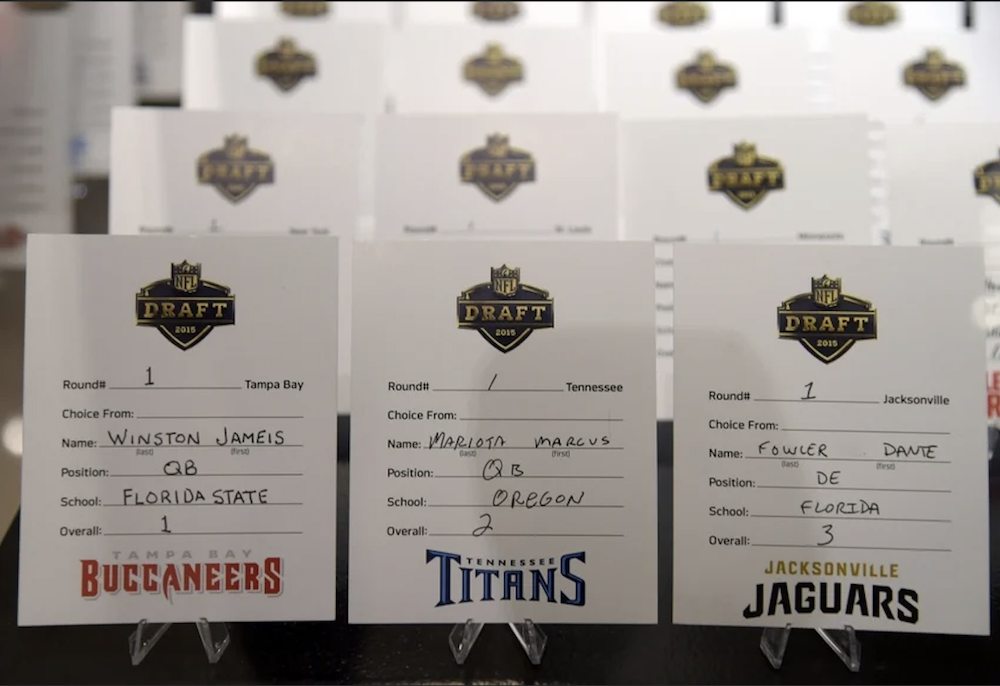 Let’s take a time machine back to 2015, shall we? One of the weaker NFL draft classes in the last decade from top to bottom, it was headlined by fifth-rounder Stefon Diggs, while Marcus Peters (18), Eric Kendricks (45), and Tyler Lockett (65)—among others—had to wait until after the top 10 to hear their names called. Let’s take a deep dive into the top 10, ranking each of the picks and breaking down how each player progressed now seven years into the future.

A Pro Bowler in his rookie season, Winston remains one of the league’s pure gunslingers as we head into 2022. While his five years under center for the Buccaneers resulted in zero playoff berths and just one winning season, Winston was more infamous for his eccentric personality, wacky training workouts, and knack for completing passes to teams donning opposite threads. 2019 saw him throw for more than 5,000 yards and 33 touchdowns, but with 30 interceptions to boot, his inability to take care of the football ultimately saw him depart.

Now the starting quarterback for the New Orleans Saints and fresh off of Lasik eye surgery that is expected to improve his ability in the pocket, he holds the key to a Saints’ playoff run this fall.

Like Winston, Mariota spent five seasons in Tennessee. However, the former Heisman Trophy winner was able to lead his team to the postseason in 2017 and finished with a career mark a tick below .500 at 29-32 as a starter under center. A dual-threat talent that has since spent two seasons backing up Derek Carr in Las Vegas, he’ll look to hold off rookie Desmond Ridder as the starter in Atlanta this fall.

The class’s premier sack artist, Fowler tore his ACL on the first day of minicamp and missed the entirety of his rookie campaign. While he remained relatively healthy in the next few seasons to follow, including an 8.0 sack year in 2017, the Jaguars ultimately declined his fifth-year option and he’s since bounced around the league. While 2019 proved to be the pinnacle of his career—thus far—totaling 11.5 sacks in 16 games for the Los Angeles Rams, he’s since spent two years with the Falcons and enters 2022 as a rotational edge rusher for the Dallas Cowboys.

Cooper only spent three and a half seasons in what was the ‘Oakland Raiders’ at the time of his NFL draft selection, but he immediately asserted himself as one of the top wideouts in football and remains one of the league’s most imposing perimeter threats today. Although he truly rounded into form after a blockbuster trade sent him to Dallas, where he totaled 517 receptions, nearly 4,000 receiving yards, and 27 touchdowns in four seasons. He now represents the headlining aerial target in Cleveland for whoever aligns under center for the Browns this fall.

A mainstay along the interior, he, alongside left tackle Trent Williams, was a shoo-in as a starter in the Pro Bowl for a multitude of seasons in Washington. A physically overpowering guard, while Scherff battled injuries during his final few seasons in the nation’s capital, he was the unspoken leader of the offense for seven seasons amassing a handful of Pro Bowl nods and an All-Pro selection in 2020. He enters 2022 in his first season with the Jacksonville Jaguars and will face his former club in his first-ever game in threads other than the burgundy and gold.

One of the more underrated interior stalwarts in football, Williams has been as consistent as they come in the defensive trenches. A versatile athlete that can slide up and down the line to present unique looks to opposing offensive lines, he appeared in 71 games for the Jets in four-and-a-half seasons, totaling 17.0 sacks, 90 quarterback hits, and 32 tackles for loss. Now a New York Giant, his game has risen to another level (18.5 sacks in 41 games). At just 28 years old, Williams remains in his prime.

For White, the NFL just never panned out. A dynamic, physical wideout out of West Virginia, it was a foregone conclusion that the No. 7 selection of the 2015 NFL Draft was going to produce in the pros. However, it was much to the contrary. Three years in Chicago saw him start in just five games—after missing the entirety of his rookie season—and he failed to record a single game in which he totaled more than 65 receiving yards on the perimeter.

After sitting out the entire 2019 campaign, White has since bounced on and off the San Francisco 49ers’ practice squad and enters 2022 in his second season as a member of the Saints after appearing in six games last fall for New Orleans.

While his second year in Atlanta saw him earn a first-team All-Pro nod after recording 15.5 sacks, he failed to remain consistent for the Falcons. In each of his handful of seasons, the former Clemson standout was able to push the pocket on a rather consistent basis, amassing a minimum of 4.0 sacks during each year in Atlanta, but he never was able to recapture the flash in the pan that was 2016.

The Falcons picked up his fifth-year option in 2019, but he never earned a second contract and has since spent time with both the Titans and Raiders. He is currently an unsigned free agent entering his second full season away from football.

At times, Flowers looked completely unplayable for the Giants, allowing 169 pressures in three seasons. While he started in 48 games during that span, it just never worked out for the former Miami Hurricane under the bright lights of New York. 2019 saw him start all 16 games for Washington—where he played well at guard—but was ultimately not given a contract extension, and instead signed with the Miami Dolphins in 2020. His struggles continued, and he returned to D.C to start 16 games for the burgundy and gold last fall. He remains an unsigned free agent at 28 years old.

One of the league’s most polarizing game-breakers during his first few seasons, Gurley’s departure from the league still remains one of the most mysterious series of unfortunate events to occur in the last decade. 2015 Offensive Rookie of the Year, 2017 Offensive Player of the Year, and a two-time All-Pro in his first four seasons, Gurley checked all the boxes as a talent that looked to be ‘next up’ among the league’s best ball carriers in recent memory.

However, nagging knee injuries limited his production during the Rams’ run to the Super Bowl in 2018, and he failed to record a 100-yard rushing game during the ensuing 2019 season. Los Angeles released Gurley in March of 2020, and he has since spent one season with the Falcons where he started in 15 games.

He sits unsigned and remains one of the game’s penultimate figures of ‘what could have been’ if he was able to stay healthy.