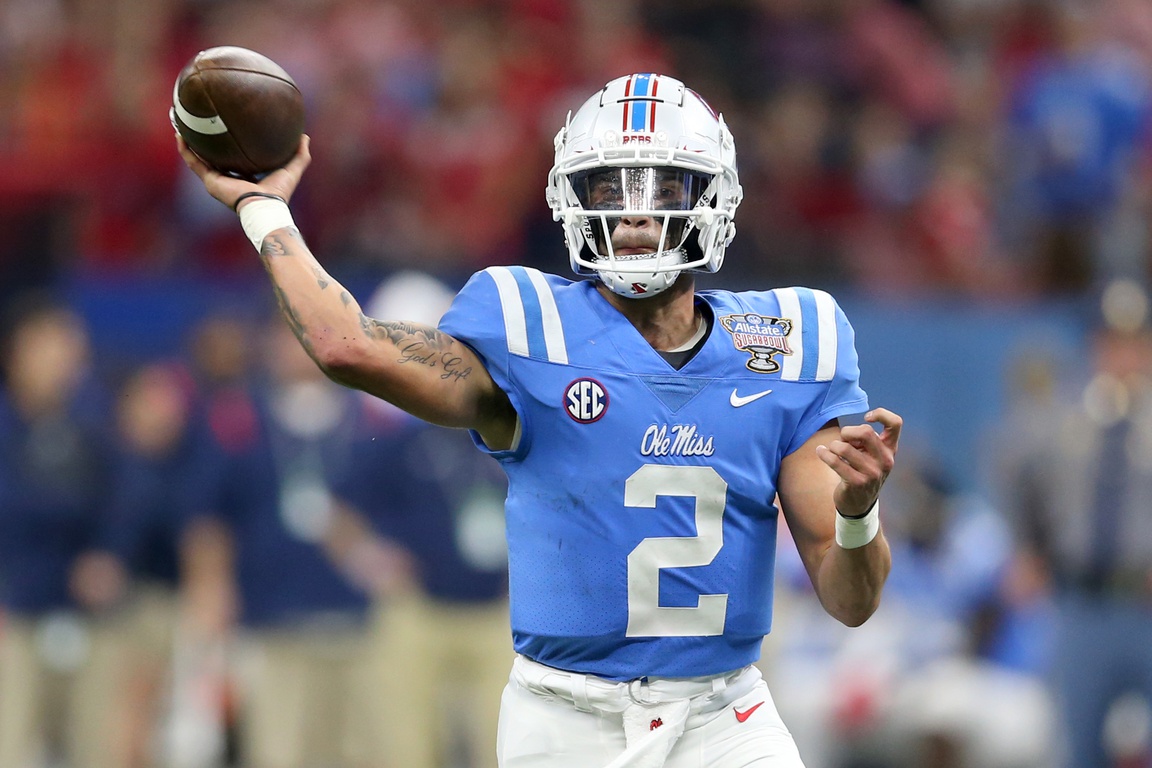 Ah, the positional group that draws our full attention each and every offseason. While this year has left much to be desired—for now—from the talent pool of signal-callers set to enter the NFL fold, the 2022 NFL Scouting Combine presents us a final glimpse on the national stage to see if any separation is created in the QB pecking order as we steamroll toward April. Here’s what you need to know about each quarterback heading to Indianapolis.

If you were to look up the definition of a ‘Notre Dame QB’, Jack Coan’s picture would pop up fullscreen. What do I mean by that? Well, he doesn’t do anything outstandingly well and won’t blow anyone out of the water with arm arrogance or maneuverability, but what he will do is put  your team in a position to win football games, and that’s all you can ask.

Unable to participate in Mobile at the Senior Bowl, the interview portion of the combine could see Matt Corral leave as high as QB1 on some boards, or as low as QB4 on others. A bonafide leader who possesses the skill set to progress into an above-average NFL starter, I expect him to ‘wow’ in meetings.

An RPO-centric signal-caller during his time as a Golden Flash, positional drills will remain of utmost importance for Dustin Crum, who presents a dual-threat option for teams to counter. While he needs polish as a thrower of the football, if teams are looking for a project with traits to work with, Crum could be an option on day three of the draft.

With multiple seasons of work in an NFL-style offense with moving pockets, vertical shots, and heavy RPO concepts, while Kaleb Eleby doesn’t possess an ‘elite’ trait that scouts look for, his experience within a pro offense could shorten his grace period as a late-round project.

One of the toughest pound-for-pound prospects in the draft, after what was a standout 2020 campaign with pro talent in abundance at surrounding positions, 2021 ushered Sam Howell back down to Earth in an uninviting fashion, to say the least. He was battered all season long behind one of the worst offensive lines in college football, forcing him to improve his ability in the ground game. Despite the lack of, well, anything up front, Howell amassed 24 touchdowns through the air and could come off the board much higher than anyone expects due to his true dual-threat ability and toughness that will command the locker room.

The project of projects in this year’s quarterback class, the 6-foot-7 talent in Cole Kelley has tools on tools on tools. A bruising ball-carrier in short-yardage situations with high-level arm talent over the intermediate areas of the offense, his level of competition remains the kicker, but if a team is willing to work and develop his skill set, there’s no reason to believe he can’t at least compete for snaps and serve as a capable backup in the NFL. 60 total touchdowns this fall will draw eyes.

While many NFL teams view D’Eriq King as a potential hybrid offensive weapon where he could earn snaps at H-back or out on the perimeter, showcasing high-level accuracy and velocity in Indianapolis could prolong his career at quarterback.

One of the stories of the pre-draft circuit, the Boston College transfer in EJ Perry is a fun study. The MVP of the East-West Shrine Bowl in Vegas, Perry’s blend of athleticism should intrigue teams looking for a similar version of Taylor Heinicke.

Primed to become the highest signal-callers ever selected in Pittsburgh’s program history, the combine may not be more important to anyone than it is for Kenny Pickett’s stock. While he interviewed well in Mobile, nailing ‘Top 32’ interviews with teams in Indianapolis could solidify his status as QB1.

More was expected out of Brock Purdy this fall. An uber-experienced talent with pro prestige within the Iowa State offense, Purdy’s limitations were evident, and his success at the NFL level will come within an offense that allows him to pick apart the shallow area of the defense due to his lack of arm talent.

A leader of men who led the Bearcats to their first-ever CFP appearance, Desmond Ridder, while he has a boatload of room to improve in pinpointing the football downfield, his size, agility, and top-tier arm talent present teams with a ton of checked boxes. He should test well and lock down his status as a high day two pick.

I appreciated Carson Strong’s willingness to let it rip in Mobile. However, a guy who I expected to tout one of the bigger arms in the class, that element was evidently vacant at the Senior Bowl leading to a ton of questions about where he will find his most success at the next level. A pure pocket passer, I expect the Colts and Steelers to have some interest.

I expect Skylar Thompson to turn a few heads in Indianapolis. He should test well, throw well, and is a high-character prospect that could fit the role Marcus Mariota provided for the Las Vegas Raiders last fall.

The toolsiest quarterback in the class, Malik Willis will turn heads in testing, and draw ‘oohs’ and ‘ahhs’ when asked to push the football vertically. Leaving the combine with high reviews out of meetings will solidify his status as a top-10 pick.

The top quarterback—statistically speaking—in the nation this fall, Bailey Zappe is one of the more interesting prospects in the QB class. While he is a tick undersized, his proven ability to sling the football from sideline to sideline with accuracy over each level of the defense could see him challenge for snaps on Sunday. Like Strong, Zappe is a primary pocket passer who has limitations off-platform and off-script, but he’s highlighted a high level of poise amid chaos throughout his career.