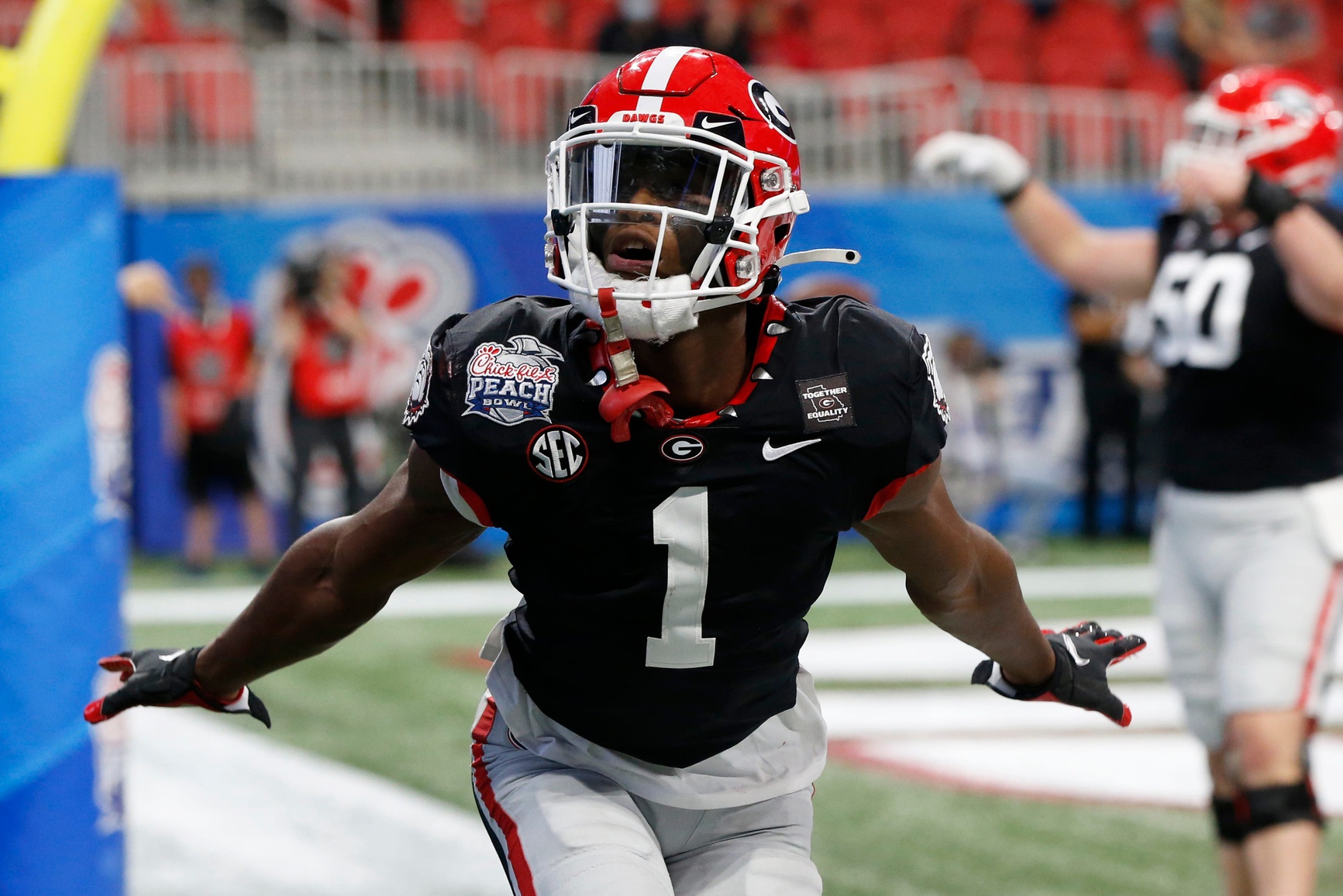 The TDN scouting staff is on the ground in Indianapolis, Indiana for the 2022 NFL Scouting Combine. This week will be filled with player interviews, testing, and, most importantly, rising and falling draft stocks. The 2022 wide receiver class is full of depth and excitement. There is no consensus WR1 and we could see a half-dozen come off the board in Round 1 alone. Where should you focus your attention? Before the wide receivers begin their testing, here are the pass-catchers with the most to gain, most to lose, and the tests that actually matter at the 2022 NFL Scouting Combine. WR With Most To Gain

Kyle Crabbs: Drake London is mocked by some as a top-10 draft selection and the top wide receiver in the class. But with a season that ended prematurely due to injury, London has some questions that need to be answered from a health perspective. I certainly wish London would be testing this week—he announced this morning that he’s only doing interviews—but the medicals will be a big layer for London regardless.

Joe Marino: David Bell isn’t discussed enough as a top wide receiver prospect and he should be. He’s an outstanding route-runner with terrific hands, ball skills, and size. The questions with Bell are centered around his athletic profile, which I think is underrated. Now, I’m not saying he’s an elite athlete, but I think he’s at least sufficient. When you combine that with top route-running, hands, ball skills, and toughness, you have an exciting receiver prospect that deserves more buzz.

Keith Sanchez: I'm going with North Dakota State’s Christian Watson. Watson is a small-school receiver that possesses a great frame at 6-foot-4 and 211 pounds and showed the ability to separate from top competition at the Senior Bowl. If Watson can manage to run a 4.4 40-yard dash, I believe he can place himself as a fringe first-rounder. WR Who Could Surprise

Kyle Crabbs: You’d be forgiven if you haven’t gotten a chance to watch a lot of Western Michigan tape to this point in the draft cycle. But Skyy Moore, an early entry into the 2022 NFL Draft, is a darling in the fantasy community, and rightfully so. He’s a delightful route-runner with good run-after-catch skills and I’d expect he shows well this week. I think he’s both agile and explosive and I am looking for his athletic testing to reflect as such.

Joe Marino: Alec Pierce didn’t perform as well as I wanted him to in the playoff game against Alabama or at the Senior Bowl, but he is an appealing combination of size and speed. Pierce averaged more than 17 yards per reception in college and is an explosive athlete. There isn’t much hype around Pierce, but his physical traits being on display at the combine could create some momentum.

Keith Sanchez: The receiver that is flying under the radar for me is Oklahoma receiver, Mike Woods II. Woods transferred from Arkansas to Oklahoma in hopes of getting more production in an Oklahoma offense that was known to be a high-volume offense for receivers—but we all know it didn’t quite payout like that for the Sooners. Woods is an explosive receiver that is a good route-runner and I believe he will run a great 40 time that will raise his draft stock tremendously. I'm Worried About...

Kyle Crabbs: There’s no question that George Pickens, when healthy, has dynamic ball skills and the ability to dominate as a pass-catcher down the field. But Pickens’ speed isn’t something that some insiders expect to see shine—so much so that it wouldn’t surprise some if he ran a 4.6s in the 40-yard dash. That would introduce a whole slew of questions, especially in a crowded WR class. Joe Marino: George Pickens went from a prized recruit with plenty of hype to an unfortunate injury that cost him time and opportunities to showcase himself on the field. Despite only playing in four games and catching five passes in 2021, Pickens came out early. With little to show in 2021, the Combine is an important opportunity for Pickens who has the makings of an X receiver in the NFL. But he’ll need a strong showing in Indianapolis to help his stock and I’m worried his numbers won’t create any excitement. Keith Sanchez: George Pickens is a player that was looked at as a potential first-rounder, but after tearing his ACL his draft stock fell tremendously. He managed to make it back at the end of the season to help Georgia win the national championship but hasn’t contributed enough to get NFL personnel talking about him being a potential first-rounder. I believe that Pickens' 40-yard dash will be the make-or-break test for him. If he runs a low 4.5, the discussion of being a fringe first-rounder starts to come up again. But if he runs a high 4.5 or a 4.6, that may cause Pickens to fall into the third round. Test I'm Most Looking Forward To

Kyle Crabbs: Receivers who can hold the line and run the gauntlet are going to pop to me and I’m eager to see some of the top guys run it. It’s a foreign drill for some and, of course, lacks practicality given balls behind are thrown at you from both sides—but nothing will test your ball skills better at the combine. I’ll be watching this exercise closely.

Joe Marino: I like Garrett Wilson as a receiver prospect and value him in the late first or early second round. That said, a lot of evaluators see an early first-round talent in Wilson. Will he still be considered WR1 if he runs a mid 4.5 40-yard dash or did evaluators slot him as WR1 with that expectation? I’m anxious to see his 40 and the discussion that comes from the result.

Keith Sanchez: I'm looking forward to seeing Arkansas receiver Treylon Burks run the 40-yard dash. All the hype is that this player is an athletically gifted receiver and at his size will put up elite testing numbers at the combine. Wish You Were Here

Kyle Crabbs: Jameson Williams is still going to be TDN’s top wide receiver by a comfortable margin. He’s a phenomenal talent who enjoyed the fruits of Alabama’s offensive system this season, but his vertical speed, ball skills, and ability to win after the catch have put him in a league of his own in the eyes of our scouts. And with that said, we so desperately wish we could be watching him light up the combine this week. Get well soon, Jameson!

Joe Marino: Drake London was having a monster season before a season-ending injury and he won’t be participating in athletic testing at the combine. With a unique body type, seeing him test and participate in drills would have presented an ideal opportunity to get a feel for his movement skills, bend, and explosiveness. Let’s hope he’s 100% by his pro day.

Keith Sanchez: I feel as though John Metchie III was just starting to emerge as a potential first-round player when he injured himself in the SEC Championship Game. I expected Metchie III to run a great 40 time and showcase his explosive route-running ability that would have solidified him as a player that can be drafted in the early second round.