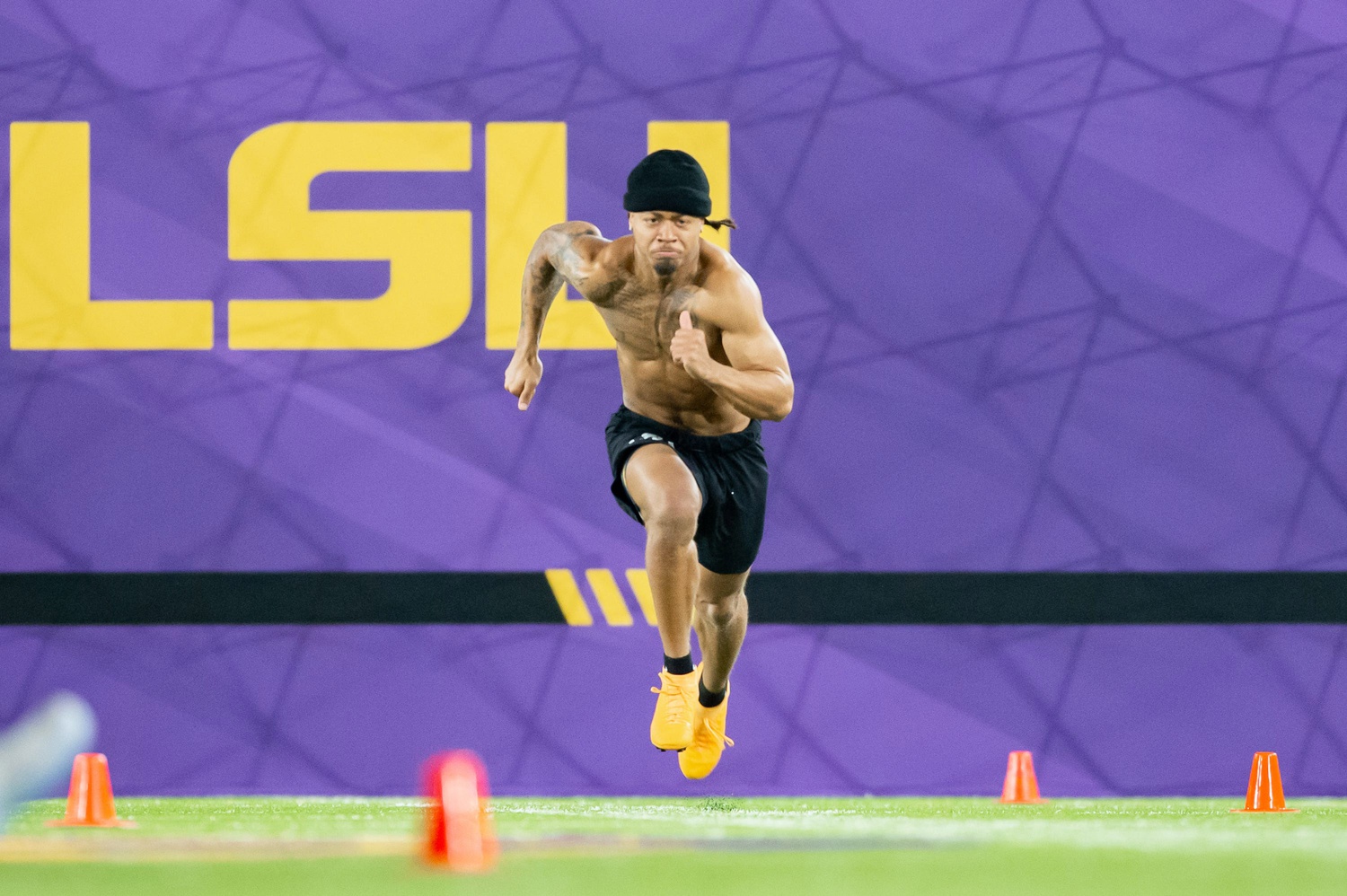 With the full list of prospects invited and set to make their way to Indianapolis for the 2022 version of the NFL Scouting Combine, let’s take it back to high school and the infamous superlatives page where the “most likely to’s…” took over hallway conversations and the years that followed. For the combine, while the topics change and labels alter, the premier event for players to showcase their athletic ability got our wheels turning here at TDN. With just a few weeks remaining until the NFL spotlight falls on Indianapolis, here’s a look inside each of the major events set to take place, and a few players to keep an eye on in the 40-yard dash, bench press, and vertical jump.

The premier showcase of speed during the pre-draft circuit, the 40 draws headlines at the combine. It doesn’t matter if you’re a well-known Power 5 athlete or a small-school talent looking to make his way up draft boards, if you find yourself among the fastest times when it’s all set and done, your name will generate buzz. Here are a few guys that are expected to turn heads. Calvin Austin III, WR, Memphis Arguably the quickest player in the entire class, Austin, expected to run in the high 4.2s, is a blazer. At 5-foot-7, while we’ve seen the long gliders in the past post low times, the lightning-quick turnover that Austin possesses in his feet should compete for the top time in Indianapolis. Daxton Hill, S, Michigan The same athlete that recorded a 43-plus inch vertical and sub-4.3 40 at the prep level, Hill is EXPLOSIVE and should test extremely well. A versatile safety that has the ability to play at every level of the defense with success, his stock will rise—even further—after his combine performance. Isaac Taylor-Stuart, CB, USC While he has a ways to go as a potential impact corner at the next level, this isn’t a film session, and Taylor-Stuart could blow the doors off the 40-yard dash. At 6-foot-2, Taylor-Stuart is a long glider and has the ability to cover ground at an elite pace. Tariq Woolen, CB, UTSA One of the “freak” athletes of the class, Woolen has the chance to win the combine. An athletically-gifted prospect, he will shine in multiple events. Don’t be surprised if he wins both the 40 and the vertical jump, which I’ll get to in a little bit.

A test of brute strength, players align under the bar and attempt as many reps as possible to lift 225 pounds. A test that has been won annually by offensive and defensive linemen, there are some big boys set to throw around some weight. Travis Jones, DT, UCONN A physically dominant interior threat, Jones wins via upper-body strength that has been nearly impossible to limit all season long. I expect big numbers from a player that’s looking to increase his draft stock after an impressive week at the Senior Bowl. Daniel Faalele, OT, Minnesota While he may be the biggest man in the class alongside Georgia IDL Jordan Davis, and it may seem like an easy pick, Faalele touts a rocked-up frame with limited body fat that should allow him to toss the barbell around. Bernhard Raimann, OT, Central Michigan A sleeper pick, Raimann touts outstanding strength fueled by a broad upper half and meathooks for hands. He could steal the show. Cade Mays, IOL, Tennessee Mays is “country strong,” and should have no issue pumping out 30-plus reps before breaking a sweat. Tyler Linderbaum, IOL, Iowa I would be remiss if I didn’t include Linderbaum. Would you be surprised if a former Hawkeye lineman totaled the most reps? Exactly. Ikem Ekwonu, OT, N.C. State I’m thoroughly excited to watch Ekwonu get under the bar. One of the nastiest maulers in the class whose strength was evident all season long, Ekwonu should put up eye-popping numbers that could secure his slot as the No. 1 overall selection. Jordan Davis, DT, Georgia BEEF. The record for reps is 51 by Justin Ernest in 1999, and if Davis is able to approach that number, his stock will blow the roof of the convention center in Indianapolis. A prospect whose inability to lift weight in high school has been well documented, he’ll get to show off in Indianapolis.

While the broad jump is used in more capacity by evaluators to judge lower-half explosiveness, who doesn’t want to see guys jump 40-plus inches and earn comparisons to some of the NBA’s elite? I sure do. Here are a few names to watch. Daxton Hill, S, Michigan The standout athlete of the 2019 HS class, he could challenge Gerald Sensabaugh’s record of 46 inches after recording a 43.6-inch vertical in 2019. He’s stronger, faster, and even more explosive now. Tariq Woolen, CB, UTSA I told you he’d be back. Arguably the favorite alongside Hill to win the event, after a standout session in Mobile, putting up elite numbers in Indianapolis could etch his name as a surefire second-round talent. Derek Stingley Jr., CB, LSU After recording a 42.0-inch vertical in high school, if he tests, Stingley should slot near the top of all participants. Well rested, Stingley will have a chip on his shoulder as he attempts to steady his draft stock. Drake London, WR, USC At times, London’s ability to rise and high-point the football was simply uncoverable. He may be limited from a participation standpoint after fracturing his ankle five months ago, but if he does test, I would expect him to jump out of the gym. Christian Watson, WR, North Dakota State An aerial artist, Watson is twitched up with an explosive lower half. He showcased his ability to rise over defenders all year long and should post gaudy numbers that rival the top performers in the talent pool. Reggie Roberson Jr., WR, SMU An impressive athlete, after opting out of the Senior Bowl, Roberson should be looking to improve his draft stock after a highly-productive final college campaign. Alec Pierce, Cincinnati An explosive deep threat for the Bearcats this fall, Pierce was a red-zone nightmare for defensive coordinators. He personified a venus flytrap in the air. JT Woods, S, Baylor A supremely gifted athlete, his impressive athletic makeup was obvious on film all year long. One of the more unknown secondary talents, Woods’ versatility and profile will allow him to make an impact at every level of the defense and on special teams. Nick Cross, S, Maryland My sleeper in the event, Cross has pogo sticks for legs. Expected to jump north of the 40-inch threshold, don’t be shocked if the former Terp takes the crown.