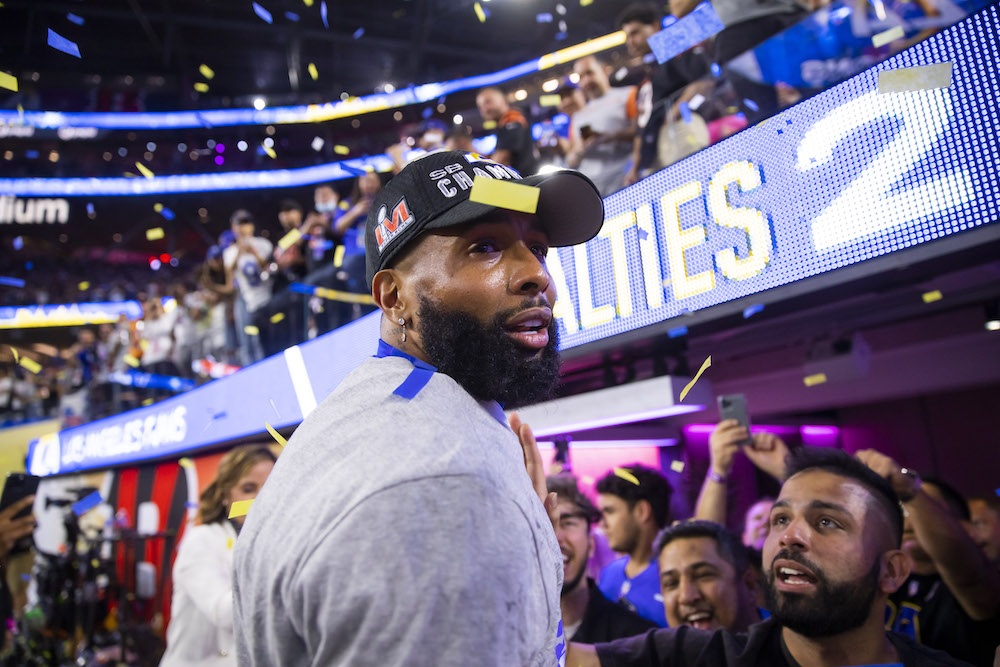 With the 2022 NFL Draft officially in the rearview mirror, the attention of all 32 general managers swiftly turns back to the free-agent market. The next wave of free agency has officially been welcomed back to the forefront of the offseason.

On Monday, the New Orleans Saints agreed to terms on a lucrative three-year contract with free-agent safety Tyrann Mathieu in a move that helps transform and improve New Orleans’ defense. Several similar high-level talents remain available, and with the draft no longer qualifying as a fallback option for NFL decision-makers to attempt to improve their roster or retool a certain position group, the services of available veterans is about to be in extremely high demand again. It’s also worth noting any player signed from this day forward no longer counts toward the league’s compensatory draft pick formula, which adds much-needed extra intrigue to the free-agent market.

An abundance of veteran difference-makers remain available, and they should begin to decide on their next destination shortly. That list includes Melvin Ingram, Rob Gronkowski, Jarvis Landry, Jerry Hughes, and Akiem Hicks, to name a few. We’ve identified three free agents and their best fits as franchises continue to jockey for position on the quest to claim Super Bowl LVII.

The Indianapolis Colts have seemingly decided to move on from Eric Fisher this offseason. Fisher manned the blindside for the Colts in adequate fashion last season and his expected departure has created a sizable hole for Indianapolis on the left side of their offensive line. As things currently stand, career backup Matt Pryor is expected to step into the role. A versatile backup, Pryor has typically played the majority of snaps at right tackle and right guard throughout his young playing career. He’s never played 100 snaps at left tackle in a single season, so counting on him to flawlessly step into that role on a left side he’s somewhat unfamiliar with while giving the Colts more than 1,000 quality snaps qualifies as a risky venture.

Colts General Manager Chris Ballard also drafted former Central Michigan offensive tackle Bernhard Raimann during the 2022 NFL Draft, but Raimann is a foreign exchange student that likely needs to make some technical advancements and clean-ups before stepping onto an NFL field. The soon-to-be-37-year-old Duane Brown remains available and could immediately step into the blindside role while providing Indianapolis with a much-needed upgrade.

Brown’s advancing age shouldn’t worry the Colts after they decided to acquire 37-year-old quarterback Matt Ryan earlier this season. It means Indianapolis is in win-now mode and signing Brown would enhance their chances. Ryan has never been a particularly mobile quarterback, so providing him with sound protection, especially on the blindside, is of the utmost importance. Brown isn’t getting younger, but he strung together yet another quality season in Seattle last year.

The Colts are aiming to compete for the AFC South in 2022 and have the funds necessary to add Brown. According to Spotrac, the Colts still possess north of $13 million in available money.

Many expected the Los Angeles Rams to swiftly sign Odell Beckham Jr. to a contract extension this offseason following a successful marriage that helped get Beckham’s career back on track. After a truly dreadful stint in Cleveland, Beckham joined the Rams in mid-November and immediately showcased his strong abilities to reach the end zone. Beckham secured a solid five touchdowns receptions in eight regular-season appearances while helping the Rams’ offense offset the injury-related loss of Robert Woods.

Beckham was equally as effective throughout a dreamy postseason run that saw the Rams capture Super Bowl LVI. Beckham was especially crucial in Los Angeles’ NFC Championship Game victory over the San Francisco 49ers, having secured nine-of-11 targets for 113 receiving yards. Beckham then opened up the scoring in Super Bowl LVI against the Cincinnati Bengals before later suffering an unfortunate torn ACL injury. Beckham’s strenuous road to recovery is likely a large reason why he currently remains unsigned, but the Rams still represent the best fit for his services.

Los Angeles’ high-octane passing attack was at its best this past season when starting quarterback Matthew Stafford had three or more high-quality options at his disposal. Van Jefferson is a good player, but L.A.’s depth at receiver is currently lacking. Bringing Beckham back makes so much sense.

Jadeveon Clowney enjoyed quite the resurgence while playing alongside Myles Garrett in 2021. After failing to record a single sack as a member of the Tennessee Titans in 2020, Clowney matched the second-highest single-season sack total of his career by totaling nine quarterback takedowns last season. The Browns unfortunately failed to capitalize and missed the playoffs, largely due to lackluster play from quarterback Baker Mayfield, but things have certainly changed since then.

Browns General Manager Andrew Berry signaled his aggressive intentions by trading for quarterback Deshaun Watson this offseason. Watson represents a monumental upgrade over Mayfield under center and should help catapult the Browns to immediate contention in the loaded AFC. Improving their offense while also sustaining some of the defensive success they managed to find last season is of the utmost importance going forward. That’s where re-signing Clowney comes into the picture.

Clowney typically prefers to skip anything offseason-related that isn’t mandatory. The former No. 1 overall selection has signed two consecutive one-year contracts, so it’s no surprise to see him remain unsigned into May.

The Browns currently lack a quality starting defensive end opposite Garrett and did little to address the situation in the 2022 NFL Draft. The Browns drafted Alex Wright and Isaiah Thomas in rounds three and seven respectively, but neither player is ready for immediate snaps. It signals Cleveland’s quiet confidence regarding their chances to re-sign Clowney ahead of the 2022 campaign. The Browns have been saving accordingly, and still possess $24.2 million in cap space.

With Watson in the fold, Cleveland’s chances to win a Super Bowl have never been greater. Clowney and Garrett formed one of the most fearsome pass-rushing duos last season, and the Browns should unite them again immediately.